25 years have passed since FIVB introduced a new position, specialising in defense, called the “libero”. The experts in defense are often also leaders of the passing line in their team, taking charge when necessary to help the team against a tough server on the other side of the net. Out of all volleyball positions, the role of libero is perhaps the most selfless and over the years fans learned to appreciate the defensive work, often celebrating great and spectacular digs or saves. While offensive plays can stun any volleyball fan, it’s the performance in defense that allows rallies to go on for as long as possible. Without the liberos there would be no mega rallies! Considering this special anniversary, we are taking a look at the European libero players who are currently competing at the Olympic Games in Tokyo 2020.

Have you ever wondered why libero is called libero (in Italian - free)? "Libero means a free player and it means that I can have free substitutions with the middle blocker," explains Jenia Grebennikov, one of the best liberos in the world. But the freedom is limited, as players in this position have to follow several strict rulles. Libero must wear a jersey with a different colour or design than those of other team members to be easily visible on the court. The libero can perform only as a backcourt player and may not play an attacking shot (when the ball is hit back across the net), serve or block. If the libero makes an overhead set of the ball in front of the 3-metre attack line, the ball may not be spiked over by the team, but if the libero makes the same action behind the front zone, the ball may be freely attacked.

In the men's tournament at Tokyo 2020, two European liberos, once again prove their strength being among the top diggers in the statistitcs. France - as usual - can count on Jenia Grebennikov, who with his outstanding skills in defence, has played extremely important role in Tokyo, especially in the clash with ROC and Brazil. Once his team was playing under huge pressure of the score, he had to keep the ball in the game after powerful spikes and blocks. During the EuroVolley 2019, Grebennikov, who has been regularly named the best libero of the world's top tournaments, revealed top traits of libero:

"The libero, for me, is the player who needs to be fast, he needs a good feeling of the game, because he needs to watch the ball all the time to understand where the ball can go. He needs to defend a lot and he needs to receive perfectly, so it's not easy, but it's a funny position, because you can make spectacular defences and nice sets sometimes." 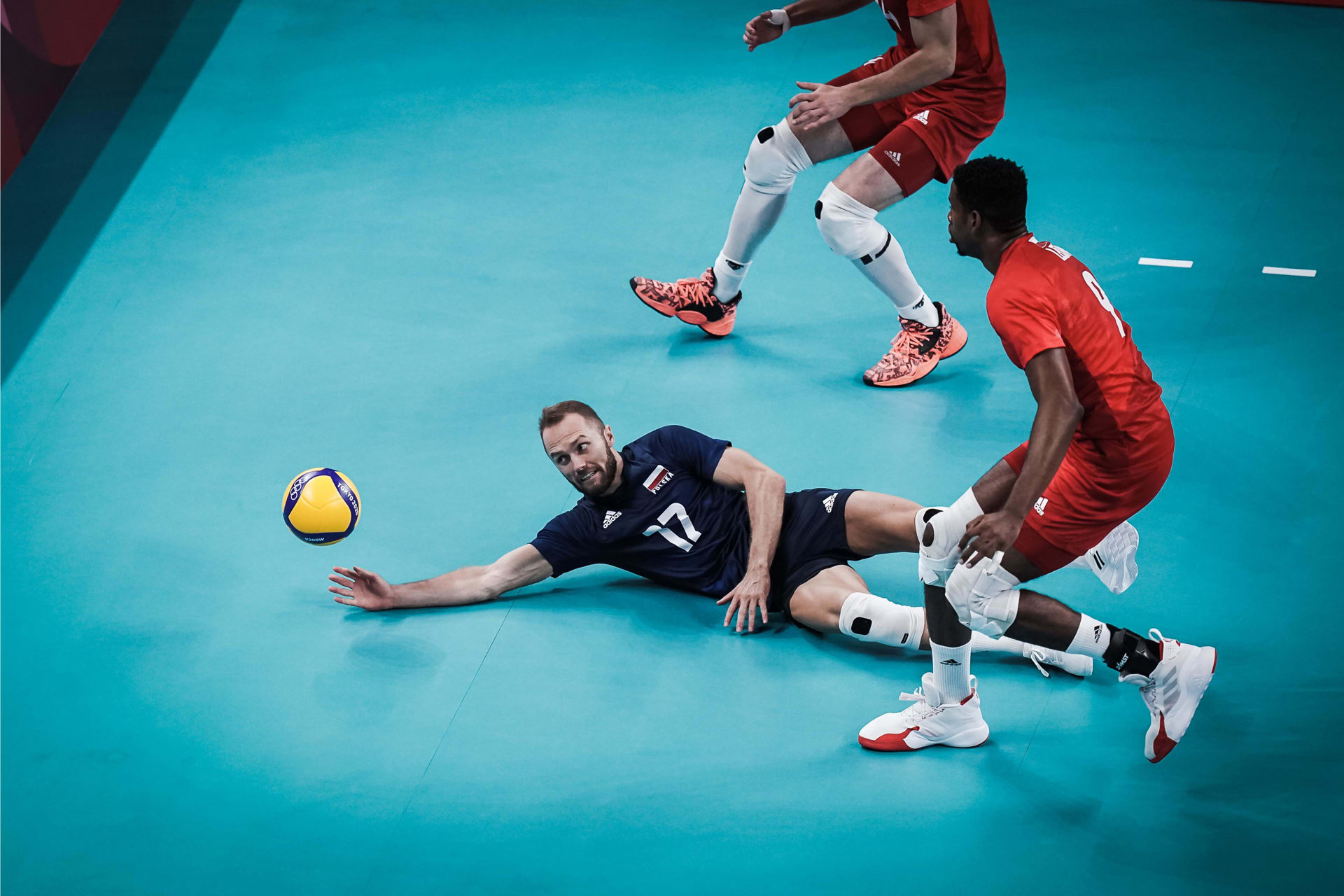 Poland's libero - two-time world champion - Paweł Zatorski is also considered as one of the world's best as usual for the 2018 World Championship Best Libero. With no doubt, he is an important part of the Polish machine, but it seems that being libero, almost always, is not a first choice for Volleyball players. "My coach told me that I had to change position to libero, if I would like to be among the best. I am extremely grateful for this today. [...] We are not the out-of-focus guys, because Brazil's Sergio was named the Most Valuable Player of the Ro 2016 Olympic Games. Volleyball fans also appreciate not only bombardiers." However, in his opinion, the best libero nowadays is Grebennikov:

"In my opinion Jenia is the best libero in the world. He does insane things in defence, he is able to save balls which others would even not think about. I like how he plays. He is a complete player and I have a huge respect for him."

Grebennikov was convinced to this position by his father. "When I was 16 - my father who was my coach told me that I had to change position, because I was too small and I didn't spike strong enough. When I was young I loved to spike - it was crazy, it was funny and it was amazing. The first two years were very difficult for me, because I didn't understand this position, but after I found something that I like - I liked to make a lot of good defences. Therefore now I love this position, because defence is very spectacular!" On Tuesday, the fans all around the world will have a chance to marvel at the skills of Zatorski and Grebennikov seeing them both on the opposite sides of the net during the quarterfinal game between Poland and France.

Libero can face an additional pressure during the Olympics. In most tournaments teams are allowed to bring 14 players, which often includes 2 liberos, but at the Olympic Games all squads are limited to 12. In most cases that means only one libero will be on that list, adding significance not only to the choice made by coach, but libero’s own form and health to withstand the two-week long competition without another official libero to have your back. Almost all women’s European teams in Tokyo 2020 have included only one libero player in their squads. Monica De Gennaro, Simge Akoz and Silvija Popovic made the cut into the line-ups of Italy, Turkey and Serbia, while ROC are represented by Anna Podkopaeva and Daria Pilipenko.

This is the third Olympic Games for Monica De Gennaro, who has been part of the Italian squad for over a decade. The 34-year old libero succeeded with Italy at the World Cup 2011 and Montreux Volley Masters in 2018, bringing home the gold medal from both competitions. Italians won several other medals with De Gennaro in their squad: silver medals at the World Championship 2018 and FIVB World Grand Prix the year before, bronze at FIVB World Grand Prix back in 2006 as well as the bronze medal at the European Championship two years ago. Monica’s skill is not only acknowledged by her fans or through multiple individual awards (she was named Best Libero at the last two world championships), but also by her fellow-libero from opposite teams. Brazilian Camila Brait named Monica the best in the world.

“To me, De Gennaro is the best in the world. There are several others I love, such as Brenda Castillo and Silvija Popovic.”

Silvija Popovic is also one of the most experienced players in her squad, as she’s competing in her second Olympic Games. The player is part of Serbia’s successful international campaign in the recent years. Following the silver medal won at Rio 2016, Serbians went onto winning gold medals at the world championship two years later and another title at the European Championship in 2019. In Tokyo Serbia led Pool A until Saturday, when they experienced their first loss in the competition so far.

The 1.68m tall Turkish libero Simge Akoz is the shortest of all four European liberos in Tokyo, but she proves that height doesn’t mean everything. Her skills and energy far exceed her height, as the player often motivates her teammates on the court. Turkey’s victory on Saturday sealed the deal on the team’s historical moment at the Olympic Games. No Turkish volleyball team, women’s or men’s, has ever reached the quarterfinal of the Olympic Games. Akoz and her team have already achieved something no other Turkish team ever did and it’s save to say they are hungry to go further in this competition. Turkey won several medals in the recent years: bronze at European Championship 2017 and silver two years later at European Championship on home soil. They have also performed well in the Volleyball Nations League, winning silver in 2018 and bronze a month ago in Rimini. The team is yet to achieve gold medal on international scene and Simge Akoz will be standing by her players all the way to the top.

The last, but not least to mention are Anna Podkopaeva and Daria Pilipenko who are the only duo of European liberos competing at Tokyo 2020. Podkopaeva has been part of the squad for years, winning two European Championships (2013 and 2015) as well as two medals of FIVB World Grans Prix - bronze in 2014 and silver a year later. While this is the second Olympic Games for Anna, who was part of the team in Rio 2016, Daria Pilipenko is enjoying her first Olympic experience. Daria has one medal from the international stage, having won bronze at the World Cup with Russia.