Full European squad in the women's quarterfinals in Tokyo 2020!

Women’s teams stepped on the court in Ariake Arena for the fourth time in the preliminary round, with many booking their long awaited quarterfinal spot. While the situation at the bottom of Pool B seemed more heated before today, the results of today’s game solidified all four quarterfinal spots for the teams in this group. Meanwhile in Pool A, Japan and Dominican Republic are still in contention for their place in the next round. ROC and Turkey rose to the occasion, securing their own fate at the Olympic Games with straight-set victories over USA and Argentina respectively. Serbia and Italy, who secured their quarterfinal positions earlier this week, experienced their first losses in the competition. ROC claimed their spot in the quarterfinal after a three-set win with USA. [Photo by Volleyball World]

ROC did not waste time against the Americans, coming on strong in their three-set win. USA rotated the squad, allowing all of the players to get some court time. The substitutes were partially dictated by Jordan Thompson’s injury in the second set, but ROC led against the Americans across the entire match. The European team led in all elements, outplaying USA in attack, block and serve - dominating especially in the latter with 6 aces comparing to 1 from USA. Nataliya Goncharova continues to be a stable leader for her team, becoming the top scorer of the match with 26 points, including 24 winning spikes and two blocks. No other player came close to her point tally - Arina Fedorovtseva was the second best scorer in the match with 13 points, while on the other side of the net Jordan Larson and Haleigh Washington gained 7 points each. The result allowed ROC not only to secure their spot in the quarterfinal, but jump to the second position in Pool B with 3 victories and 8 points, while USA trail behind due to worse point ratio. 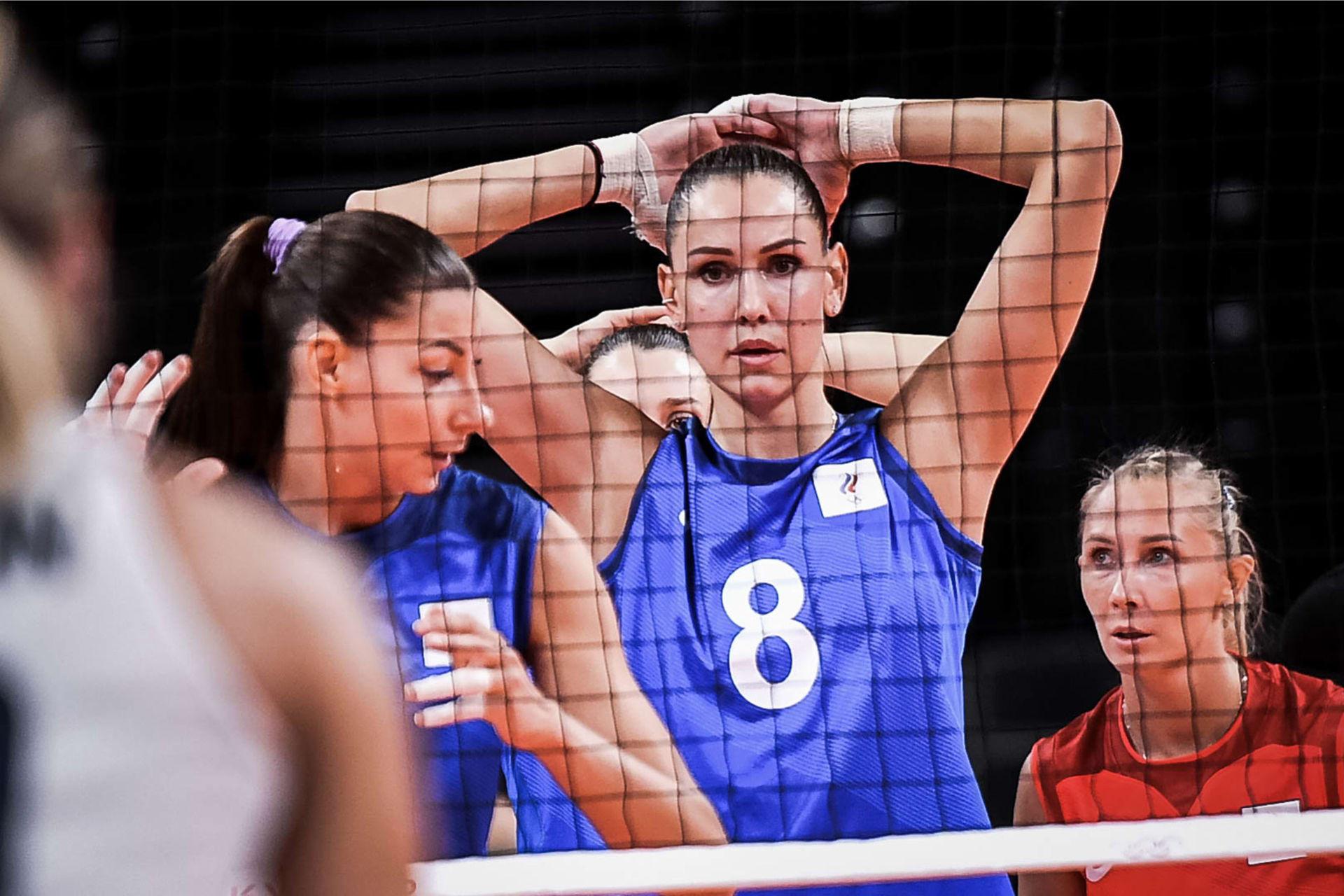 “ROC played a really sharp, clean game of volleyball. One of our hallmarks is we control the serve and run our offence. But our sideout game got broken down by their serving, blocking and defence. We had no answers. Irina Voronkova has been carrying a heavy load for her team for a long time and she hit almost 50% efficiency today. Goncharova hit close to 70%. Their serves gave us trouble, their jump spinners hurt us." Turkey are the fourth team form Pool B to reach quarterfinals . [Photo by Volleyball World]

Turkey were the second European team to claim the victory on Saturday, beating Argentina in straight sets and making history for Turkey. No Turkish team, in both men’s and women’s competition, has ever reached the quarterfinal of Olympic Games.
Turkey outplayed their opponent in almost all elements, scoring 44 winning spikes, 13 stuff blocks and 2 aces, comparing to 33 winning spikes, 5 stuff blocks and 1 ace on Argentinian side. While Hande Baladin emerged as the leading scorer for Turkey with 14 points, her teammates were not far behind. Captain Eda Erdem scored 13 points, while Ebrar Karakurt and Zehra Gunes gained 12 points each. The latter performed wonders at the net, scoring 7 stuff blocks, which in effect makes her the leading blocker in the competition with 18 points overall. But the individual achievements fall short of importance, as the match result was the key element for Turkey’s further journey in the competition. The team remains fourth in Pool B with 2 victories and 7 points and while China can still match their wins and points - if China record a win and Turkey lose their match to ROC on Monday - Turkey would outscore the reigning Olympic champion in set ratio. Regardless of the results on the last day of preliminary round, Turkey will be joining Italy, ROC and USA in the quarterfinal phase.

“Our group is extremely difficult. Everyone is beating each other. We beat the champion, China, 3-0, and I think that showed how anything is possible in our crazy group. We are so happy to make the top eight. We are going to fight for a medal.” 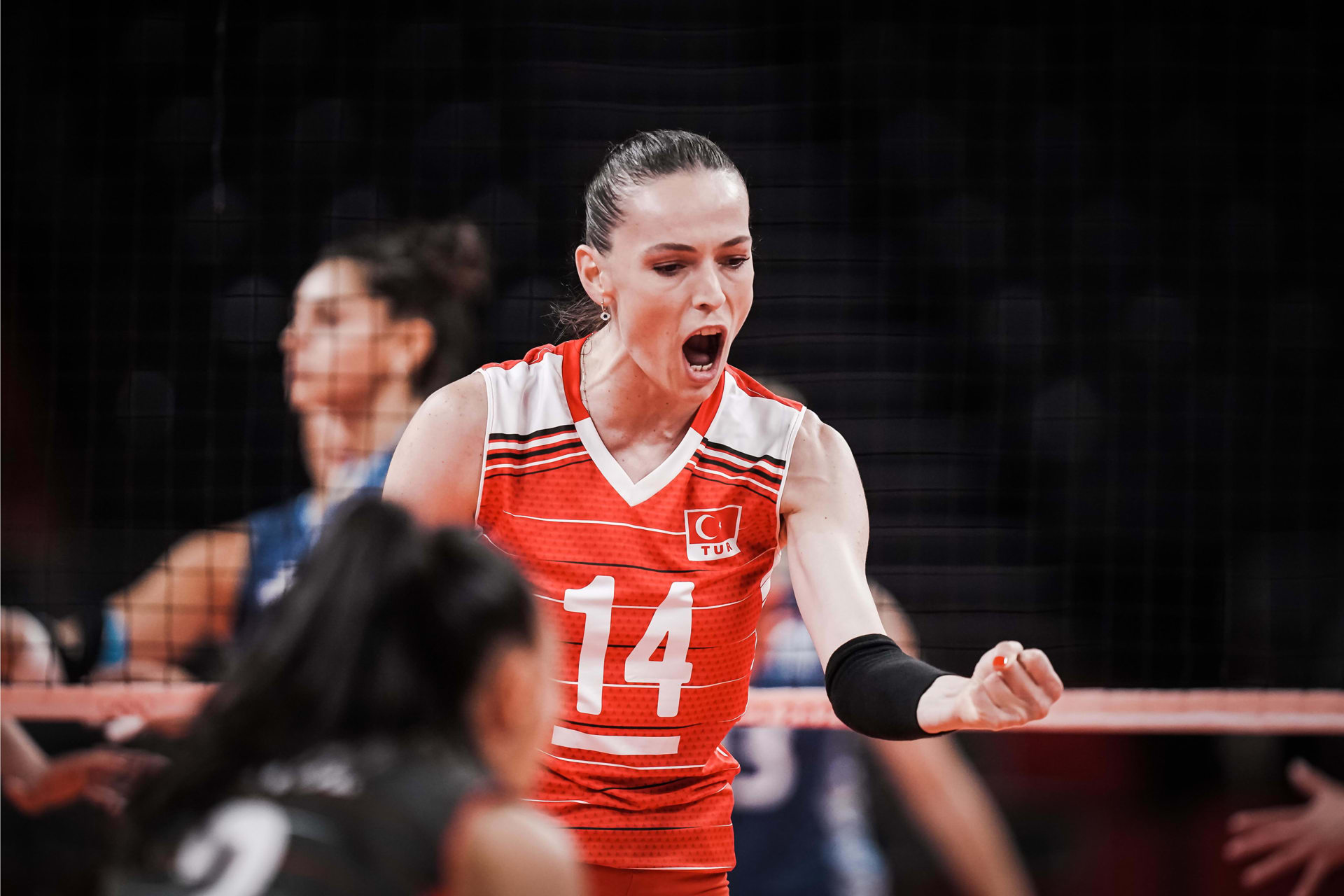 "When I was asked before the Olympics which are the best teams in the world, I said China, USA and Italy. And then I see them all together in our group. That seemed impossible for Turkey. But no one would have predicted that China would lose and be out of the tournament. If someone did predict that outcome, they are very rich today. Now we have a chance at a medal. Everything is possible." Serbia suffered their first loss in the competition. [Photo by Volleyball World]

Serbia suffered their first loss in the competition after a four-set match against Brazil. The Europeans dropped to second position with Pool A, having 3 victories and 9 points, while Brazil took over the leader position with 4 wins and 11 points. Despite the loss, Serbians challenged Brazil in some elements, leading in blocks and making fewer errors than the Brazilian side. Tijana Boskovic was back with her record-scoring ways, bringing her team 32 points - 30 winning spikes, 1 block and 1 ace. Bojana Milenkovic added 9 points of her own, including 4 blocks. Fernanda led Brazil with 17 points, including 14 winning spikes, 1 block and 2 aces. Boskovic’s impressive point tally keeps her on top of the Best Scorer’s and Best Attacker’s rankings with 103 points overall and 92 winning spikes.
Serbia, alongside Brazil and Korea have secured their quarterfinal spots, while the fight for the last spot from Pool A will continue on Monday between Japan and Dominican Republic in a direct clash. Serbia will be facing Korea and play to keep their second position in the group. Despite the defeat, Italy remain top of Pool B. [Photo by Volleyball World]

Despite knowing that their chances for quarterfinals are gone, the Chinese decided to not leave the competition without a fight, putting a tough challenge in front of the Italians. But while Italy dominated slightly in attack and serve, China forced them to make too many errors, which resulted in Italy’s first defeat at Tokyo 2020. Despite the loss, Paola Egonu was the top scorer in the match with 18 points (14 winning spikes, 2 blocks and 2 aces), while Elena Pietrini scored 14 points of her own. Anna Danesi performed well in block, scoring 5 points. Li Yingying was once again the leading player for China with 15 points. The result did not tarnish Italy’s position in the group as they remained on top of the table with 3 victories and 9 points so far. Italians will be defending that position on the last day of the round when they will be facing USA.