With the club season coming to an end this upcoming Sunday when the #SuperFinalsLjubljana will take place, fans across Europe are already looking forward to the start of the national season, where their favourite players will enter the courts in various competitions. One of them - the much-anticipated 2022 edition of the CEV European Golden League - Men and Women, is set to start on May 25, with as many as five men’s and three women’s games taking place (NB Women’s game Ukraine-Romania is scheduled for May 24).

The eventual winners in both tournaments will not only enjoy a high money prize, but the right to contest at the FIVB Volleyball Challenger Cup in the summer of 2022, where a much coveted ticket to join the international Volleyball elite in the 2023 VNL will be up for grabs. The 11 participating teams are divided into three pools (Pool A: Portugal, Slovakia and reigning champions Turkey; Pool B: Croatia, Denmark, Spain, Ukraine; Pool C: Belgium, Czech Republic, Estonia, Latvia). During the League phase, the teams will contest a double round robin in their groups, starting on May 25 (the pool composition is according to the serpentine system based on the CEV National team ranking).

After completion of the pool phase, Croatia will be hosting the men’s Final Four where the home favourites will be vying for top honours together with the three pool winners. If Croatia are among the pool winners, the best 2nd ranked team across all pools will qualify.

Pool A: Portugal and Slovakia are in the company of the reigning champions Turkey, who finished with the gold not only in 2021, but in 2019 as well (due to the coronavirus outbreak the CEV Volleyball European League did not take place in 2020). Led again by 2021 MVP and star opposite Adis Lagumdzija, Turkey are one of the favourites for claiming the title again. The Turkish team count on some well experienced players as Metin Toy, Murat Yenipazar and Yiğit Gülmezoğlu among others, and on some young hopes such as Efe Bayram and Ahmet Tumer.

As for Portugal and Slovakia, they can definitely look for some improvement in the standings, as the Portuguese players last year finished on last position (10th), while Slovakia were 7th together with the Czech Republic and Spain.

Pool B: Last year’s finallists from Ukraine will meet on the court the home favourites from Croatia, as both teams seem to be favourites in the group. The Ukrainian squad counts on the star outside spiker Oleh Plotnytskyi, but on the other side of the net there will be the #EuroVolleyM 2021 best server Leo Andric. The Croatian team delivered their best performance last year at the CEV Volleyball European Championship, and will for sure look to keep on improving, getting ready to host the F4 of the Golden #EuroLeagueM.

Not to underestimate is the team of Denmark who are the CEV Volleyball European Silver League 2021 Winners. The Spanish team is probably the underdog in this group of players, although they can always surprise the opponent.

Pool C: In a quite balanced pool, Belgium, Czech Republic, Estonia and Latvia will fight for the first place. Estonia are last year’s bronze medallists, while the Red Dragons from Belgium finished fourth. While Latvia are expected to deliver more or less the same performance as in 2021, all eyes will be on the team of the Czech Republic, who last year became the surprise of the 1/8th finals at #EuroVolleyM, winning 3-0 against the reigning champions of France. 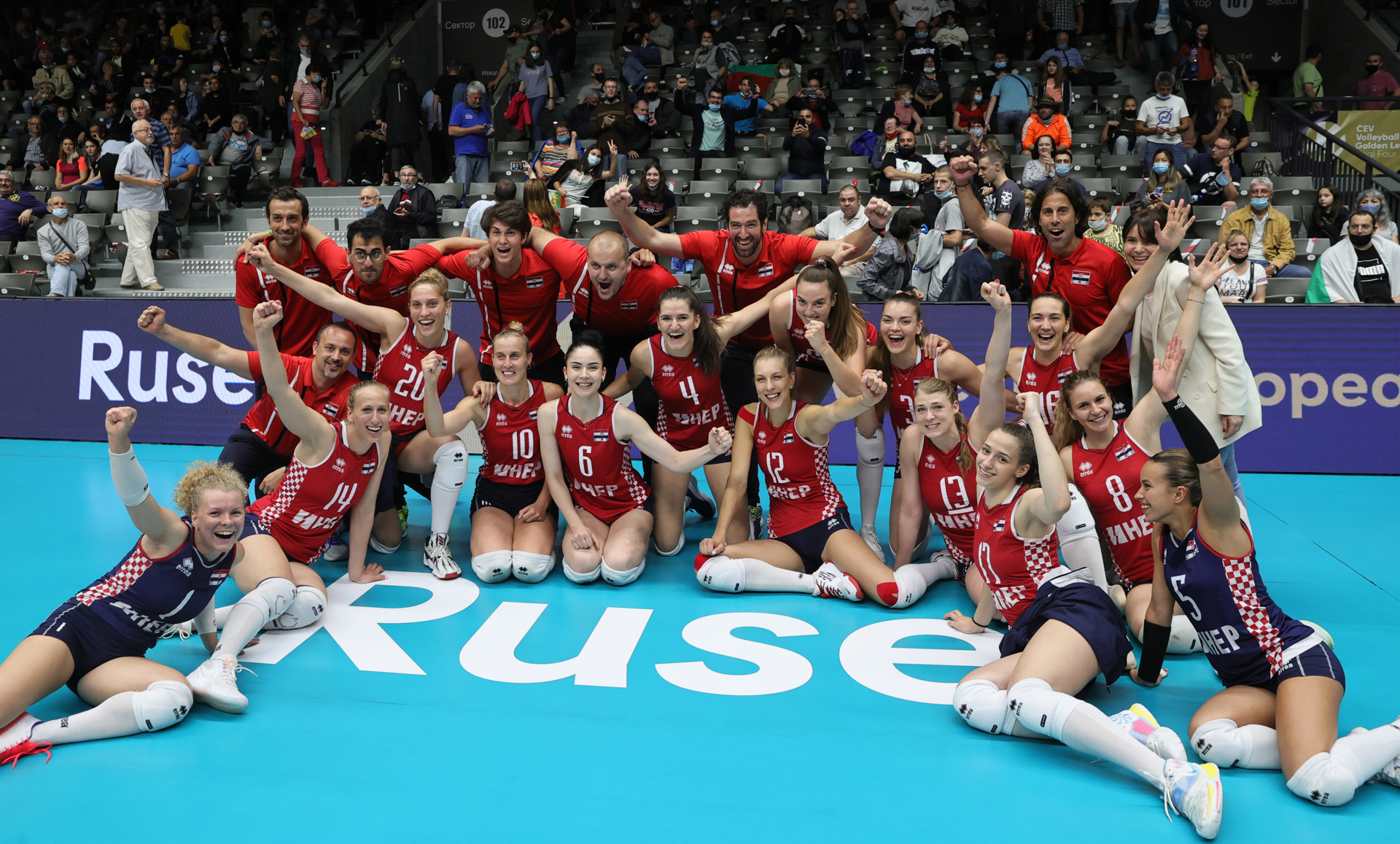 The CEV Volleyball European Golden League will have a new champion for sure, as last year’s winners - Bulgaria, take on a new challenge this year, as they will be competing in the international Volleyball elite at the VNL. Consequently, the runner-up team of the CEV Women’s Golden League 2022 will be the next eligible team to replace Bulgaria for the FIVB Volleyball Challenger Cup 2022.

Nine teams will take part in the 2022 edition of the competition. The teams are divided into three pools (Pool A: Bosnia and Herzegovina, France, Spain; Pool B: Croatia, Czech Republic, Slovakia; Pool C: Hungary, Romania, Ukraine).

Since no Final Four tournament will take place, the semi-finals and the final will be played as a single match.

Pool A: The 2021 CEV Volleyball European Silver League - Bosnia and Herzegovina will meet in this group the 2021 CEV Volleyball European Golden League bronze medallists from Spain, and the 2021 fifth placed team of France. Winning the Silver #EuroLeagueW last year was an important achievement for the Bosnian team (their first podium in the competition), and led by their star player and MVP of the tournament - Edina Begic, they will for sure try to show their full capabilities

Spain, on the other hand, had a rather decent season last year, and although they might not be considered favourites of winning the trophy, they are slowly building up a stable performance throughout the years. France will have the chance to get a sweet revenge from Spain, as last year, in the last and most important fixture between both teams, it was Spain who took the much needed two sets, and qualified for the F4.

Pool B: 2019 trophy winners - the team of the Czech Republic made it to the F4 last year, but in Ruse, Bulgaria, they couldn’t seize a victory and finished fourth. In Pool B, they will meet their opponent from the 2021 final tournament, Croatia, who on the other hand, are the 2021 runner-up, and are considered by many, one of the favourites for the 2022 title. Croatia’s superstar - Samanta Fabris, who finished with 18 points in last year’s Golden Medal Match, will be more than determined to bring home the trophy. There has been a significant change in Team Croatia staff, as Daniele Santarelli put an end to his era in the team. However, the new head coach, the 35-year-old Ferhat Akbas from Turkey, aims high.
Pool’s underdogs - Slovakia, finished fifth place in 2021, and are ready to deliver some surprises to tie the situation in the group.

Pool C: Compared to the other pools and looking at the 2021 final standings, none of the teams (Hungary, Ukraine, Romania) can be considered big favourites of winning the trophy. However, Ukraine made a great step towards aiming high, as the former coach of the Bulgaria’s women’s national team, and 2021 Golden League winner, Ivan Petkov signed as a head coach together with his staff - Lazar Lazarov (assistant coach) and Darko Mitrovic (assistant coach 2).

Hungary, on the other hand, did not perform quite good last year, finishing last, but those who follow the competition, remember that the team played a final against Bulgaria in 2018, and grabbed the silver, while in 2015 were crowned champions. Romania don’t have any big achievements on the EuroLeagueW podium, but after a decent performance in 2021 they are not to be underestimated.

With many interesting fixtures coming up in the next weeks, the national teams, competing at #EuroLeagueM and #EuroLeagueW, can definitely get a getter preparation as well for the EuroVolley 2023 qualifiers that will be held later this summer, while fans can enjoy high-class Volleyball battles at the beginning of the national teams’ season.