Czechia and France to fight for the 2022 Golden #EuroLeagueW trophy

Czechia and France will meet on the court in a battle for the trophy at the 2022 CEV Volleyball European Golden League 2022 - Women. The teams succeeded in defeating their semi-final opponents, Romania and Croatia , respectively, and on Saturday, will lock horns to determine this year’s winner.

While the first semi-final match between the Czech Republic and Romania turned out to be a real Volleyball thriller in five sets, in the second one, France did not have any problems with their opponents, and remain unbeaten in the 2022 edition of the competition.

Czechia, who are 2019 winners, will have the chance to win a third #EuroLeagueW Gold Medal in one decade. On the other hand, France have never lifted the trophy. 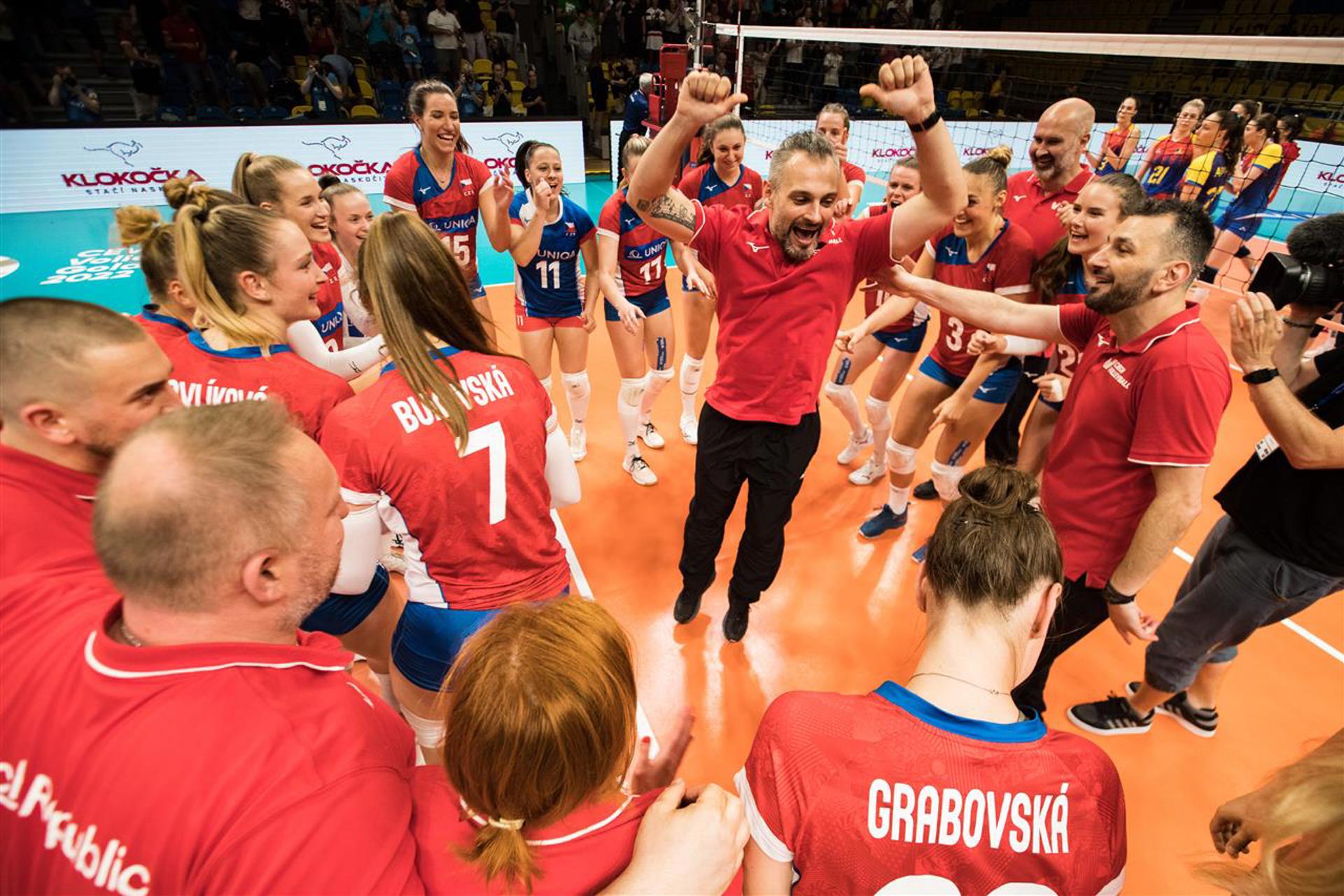 Czechia celebrating the ticket to the Final

The Czech Republic and Romania got the ball rolling after an exciting first set. Both sides entered the court motivated, and ready to fight for each ball, as they started a point-for-point rally throughout the whole set. Romania put up a real fight, but with some decisive actions after the 20th point (an ace for 22-20 by Denisa Pavlikova and a great spike by the home side’s captain, Michaela Mlejnkova for the set point after a great rally), the players around head coach Ioannis Athanasopoulos emerged victorious. The better success on attack (15 winning spikes to nine) was crucial for the hosts in this set, as on the blocking and at the serving line the Romanian team was slightly better (four to three kill blocks, and three to two aces), delivering good defence as well.

Czechia did not disappoint their fans in the third set, and even though Romania tried their best, recovering from an early set back, the Czech players seized all their chances on their opponents’ errors (nine), and getting closer to the Gold Medal Match. Romania finished this set with more winning spikes (16 to 13), but it wasn’t enough.

In a must-win fourth set for Romania, the players, coached by Guillermo Naranjo, found their power and started breathing their rivals’ necks, turning the tables after the 10th point, showing spectacular defence. Even though that Czechia’s Klara Faltinova stepped up, it wasn’t enough to stop the inspired team of Romania, that finished with two more successful attacks in this part - 11 to nine. The Czech Republic denied one set point to their rivals.

After a close call in the beginning of the tie-break, Czech Republic, led by captain Michaela Mlejnkova, could speed up, leading at 9-6. Romania suffered in organising their block, even though they saved one match point, Czechia claimed the victory after a spike by Veronika Trnkova.

Statistically, the game was rather balanced - Czechia were better on the winning spikes (63 to 60) and aced nine times (to five by their opponents). Romania recorded one more block (11 to 10).

Home leader, Michaela Mljnkova topped the charts with 20 points to her name, followed by Romania’s Didona Iuna Catalina Zadorjnai with 19.

France did not leave any doubts over who was the better team in the second semi-final game.

Only in the first minutes of the game, did Croatia had the lead, as they stormed to a 6-1. Thanks to a good performance on the block, France closed the big gap (7-9) and gradually built up a comfortable point difference in their favour (16-9) to take the opener.
In this set, France proved better on all counts - 12 winning spikes (to six), five kill blocks to three, two aces to zero. 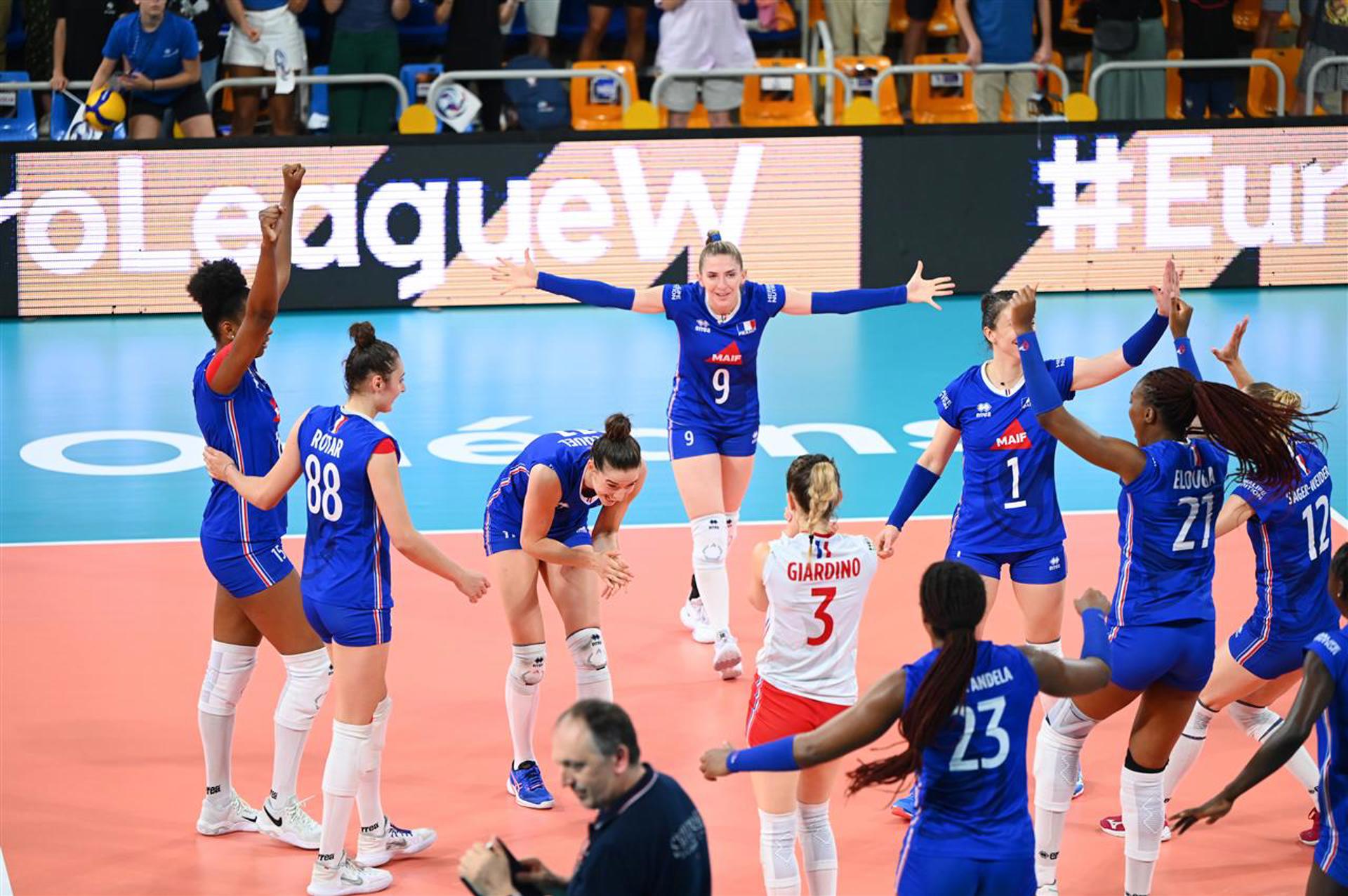 It looked like that Croatia could get back on their feet in the beginning of the second set (5-5), but France did not allow any surprises, and led by Lucille Gicquel, took things into their hands. Dominating completely on the court, and despite some efforts delivered by the Croatian team, with Amelie Rotar on the serve, France were unstoppable, winning the second set, and getting closer to the win. Once again, were the French players impeccable in attacking - 16 to only eight winning spikes in this set.

Enjoying the game to its fullest, the players around head coach Emile Rousseaux, dictated the rhythm of the play, while Croatia were unable to react (allowing their opponents to even record a serie of seven points in a row for 18-7). Nothing was left for the Croats, who recorded a straight-sets loss, while France booked their spot at the Final.

Overall, the outstanding performance at the serving line (nine aces!) and the difference in the level of efficiency in the attack was crucial for the French victory - the hosts finished with 46% while Croatia with 23%.
Nina Stojilkovic became one of France’s heroes this evening, with as many as five aces to her name, while top scorers of the match became her teammates - Lucille Gicquel and Héléna Cazaute with 11 points each.