Czechia and Türkiye in a battle for Golden #EuroLeagueM trophy

Back-to-back defending Golden #EuroLeagueM champions, Türkiye will fight for a third trophy in a row, after defeating at 3-1 the hosts of the Final Four-Croatia. Adis Lagumdzija with 24 points to his name, and his colleagues, could stop the inspired Petar Dirlic (25 points) and his teammates.
In the Gold Medal Match, the players of head coach Nedim Özbey will face Czechia, who earlier that day delivered an outstanding comeback against 2021 silver medallists from Ukraine - losing the first two sets, they could find their way back to the victory.

The Big Finale is set to take place this Sunday, at 20:30 CEST in the Arena City Sport Hall in
Varaždin, while the Bronze medal battle between Ukraine and Croatia will start at 15:00 CEST. 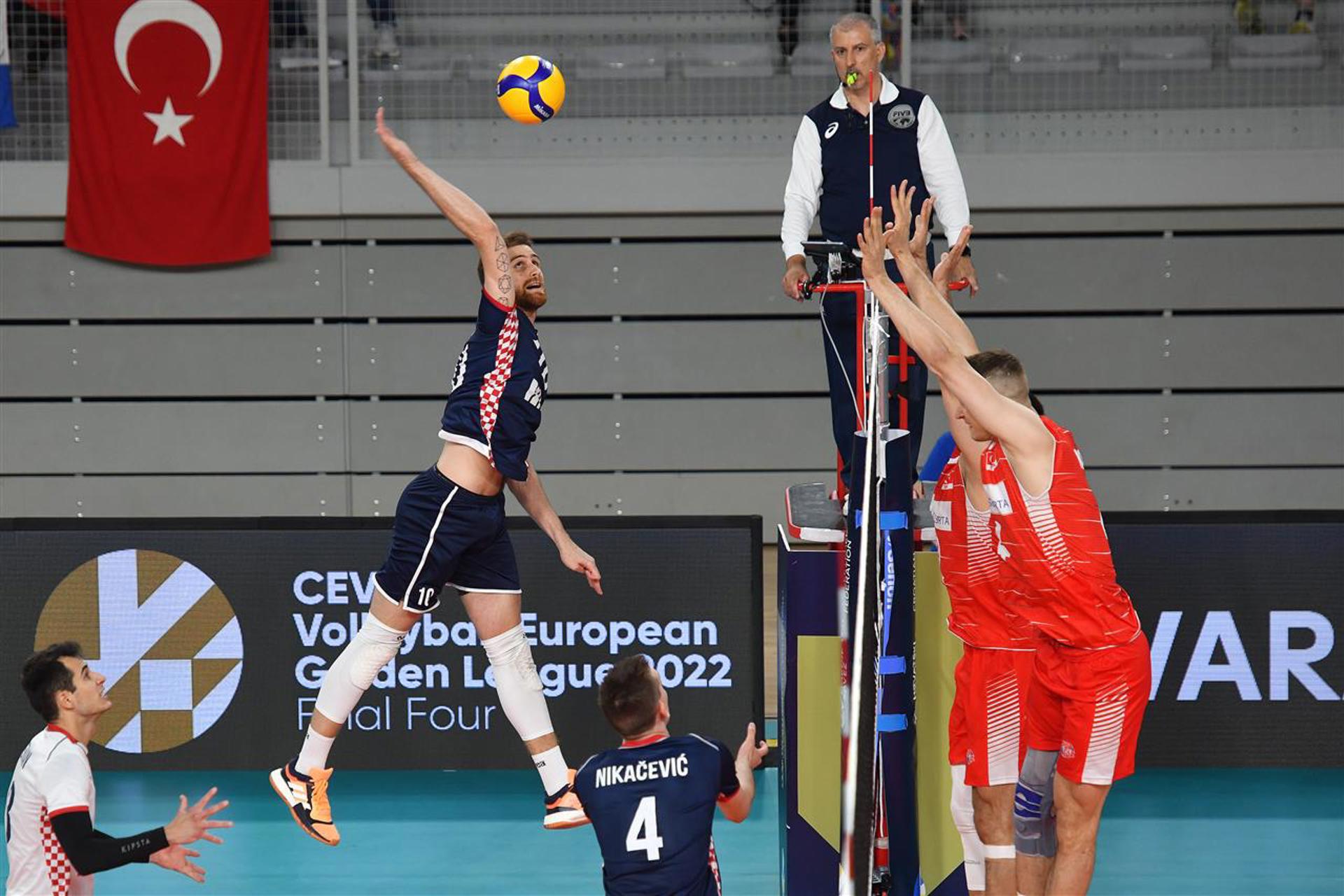 Türkiye outperformed Croatia in a match that lasted exactly two hours. The hosts put a real fight, but the 2019 and 2021 winners stopped them in the deciding moments.
Overall, the players around head coach Cedric Enard were better on blocking (nine to six) and aced seven times (five). However, the better efficiency on attack (52% to 48%) and the more concentrated performance were crucial for the Turkish win.
2021 MVP, Adis Lagumdzija scored as many as 24 points, but Croatia's Petar Dirlic took the honours for top scorer with 25 points to his name.

The first set set the tone for an exciting and intense battle ahead in the match. Although Türkiye started slightly better (4-2), Croatia pushed hard. A point-for-point race marked the last minutes of the part, and even though the host had a two set points, the 2021 winners from Türkiye denied them, to eventually open in their favour after a great set by captain Arslan Eksi and finishing spike by Bedirhan Bülbül. As many as 18 winning spikes helped the Turkish team to take the set. However, on the other side of the net, Croatia were better on the blocking (three to one) and aced two times (to one). 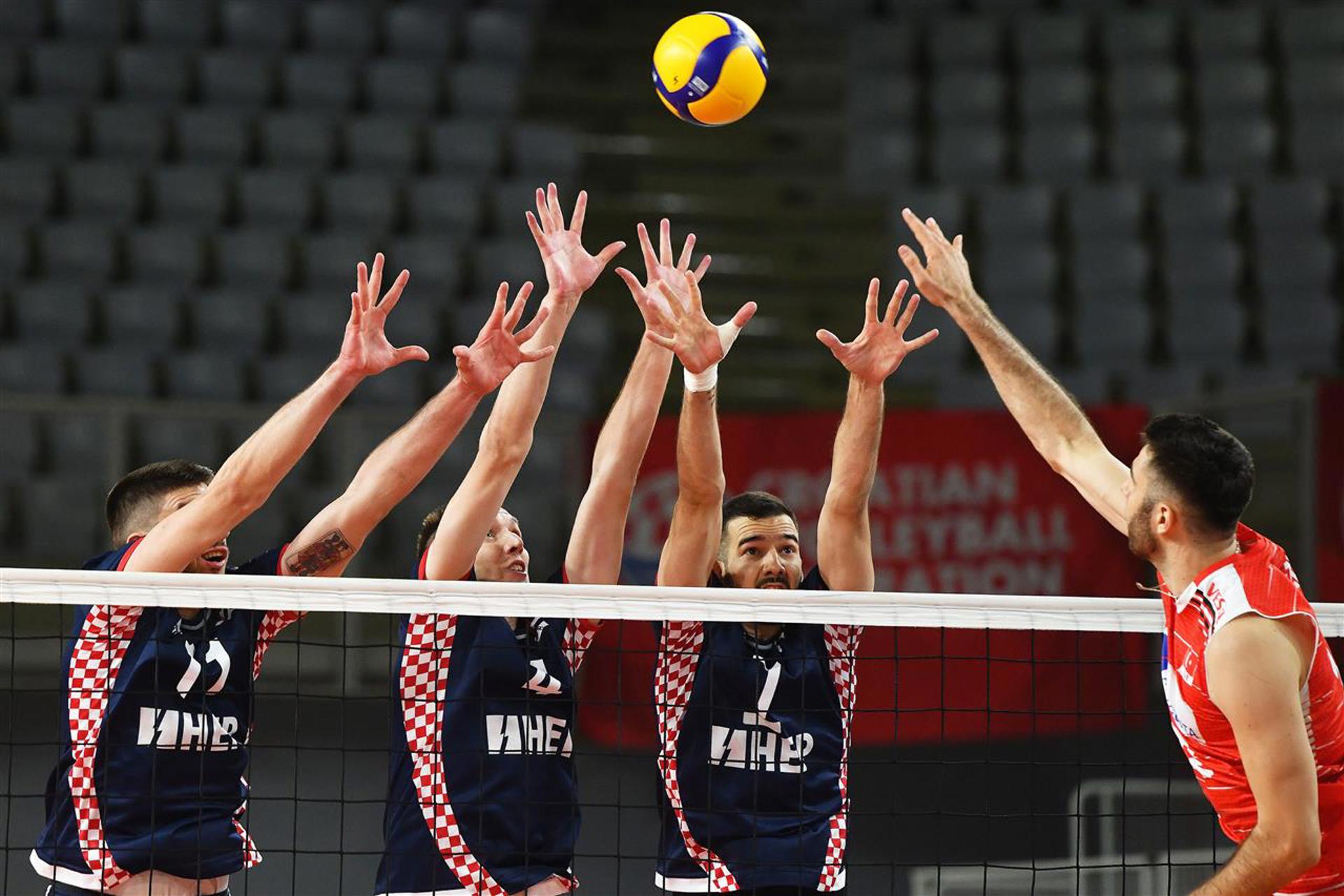 The players of head coach Cedric Enard were determined not to lose any more chances. They stepped up their game in the second set(10-7, 15-12), and even though the back-to-back defending champions from Turkey tried to get closer, in no moment did Croatia lose concentration (even when, on the other side of the net, was the 2021 MVP, Adis Lagumdzija). Kruno Nikacevic with an ace helped his team to tie the score. Three aces and three kill blocks were crucial for the hosts in this set.

Only in the first minutes of the third set were the teams equal. Türkiye then speeded up, leaving no doubts over their domination in this set (16-10, 21-13). The reigning champions lost concentration for a moment (23-19), but Croatia couldn’t put them against the wall, as they suffered from own errors as well (11).

The Turkish team dominated on the court in the last set, leading with a comfortable point-difference throughout most of the time. Four kill blocks and two aces made the difference for the players of head coach Nedim Özbey, as on the other hand, Croatia recorded four more points from attacks. However, Türkiye’s greater level of concentration (only one error in this set, to seven by Croatia) became the key component to the set-win.

"It's a Final Four! Of course, we were expecting a tough match. We had a difficult fixture, especially in the first two sets, but in the end, we prevailed, and we are happy to be again at the Final. I hope that tomorrow, we will beat Czechia and will lift the trophy for a third time in a row!"

"The match was difficult, we can be satisfied, we showed a very good game. All my teammates performed good, I could have contributed more. Congratulations to the Turkish national team on the victory, they are a very good team and I think that in the end, the length of the bench was crucial. After the second set, they changed practically the whole line-up and beat us. We are going on to fight for the third place against Ukraine, and we hope that we will win tomorrow. "- 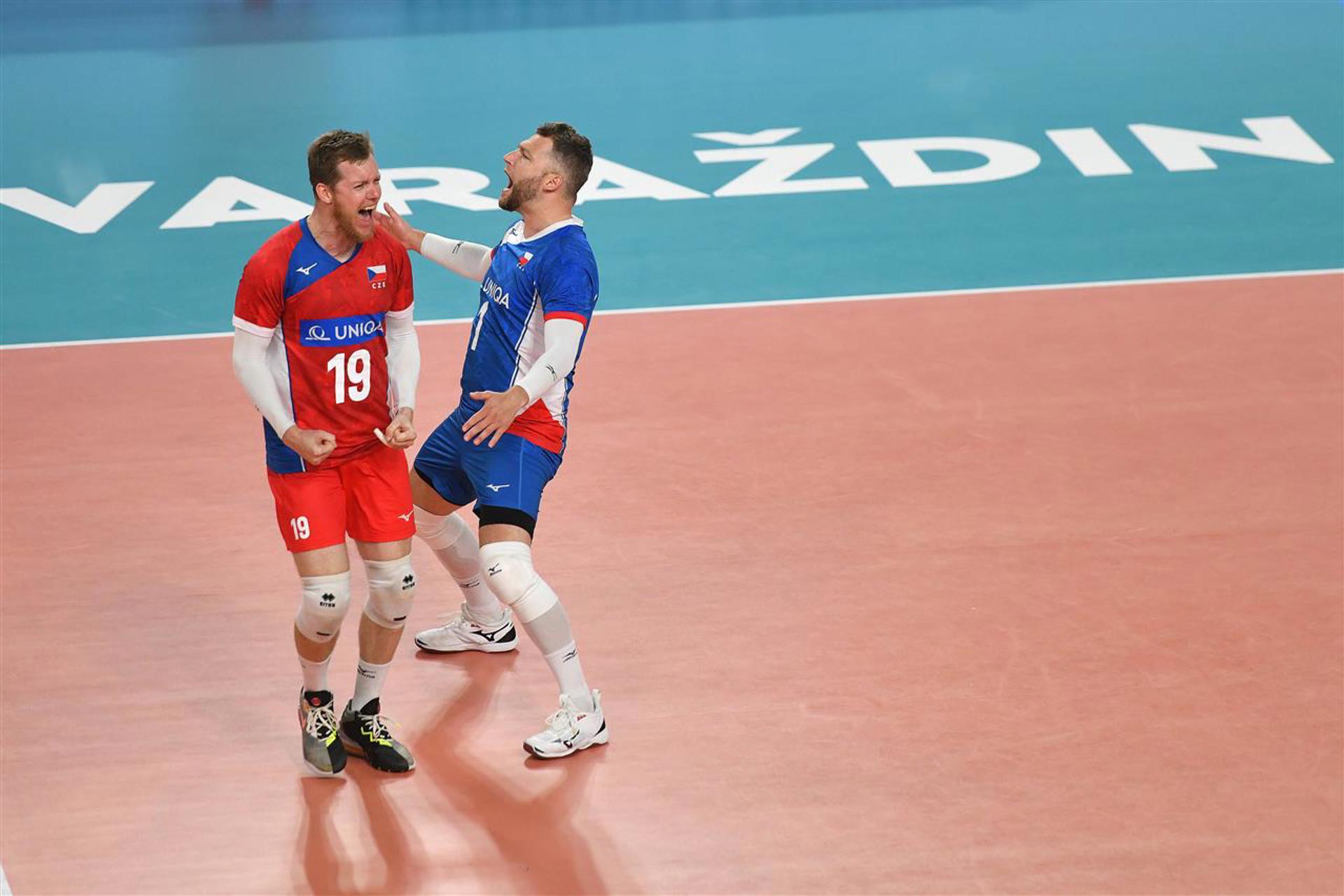 Czechia and Ukraine delivered a real Volleyball spectacle in the first semi-final of the day, at the Final Four of the Men’s Golden #EuroLeagueM. The players around head coach Jiri Novak were two sets behind, but came back in the match, claiming the next three. Statistically, Ukraine were better on attack (63 to 58 winning spikes), while on the blocking, the sides delivered a rather equal performance - 10 to 11 for Ukraine. It was the better serving (nine to two aces) that played a pivotal role for the Czech’s win, as the Novak’s players recorded aces in the most important moments of the game. The Czechs also had a better service reception, 48 against 36%

Throughout the whole first set, Ukraine would lead, but Czechia would breathe down their necks. Even though Oleh Plotnytskyi and his teammate stormed to a 4-0 right after the first referee whistle, finishing with no problems their attacks (seven spikes until the 11th point), Czechia were putting their best effort in defence. It paid off, as the Czech got closer twice - 14-15, and in the end of the set at 23-24. However, Ukraine showed nerves of steel, and also seized their chances on their opponents’ errors (the most important one, probably, the error by Galabov on the serving line for the set point).

It was a close call in the beginning of the second set (4-4), but the players around head coach Jiri Novak gave Ukraine a taste of their own medicine, delivering some monster blocks, taking the lead at 13-11. However, team leaders Yurii Semeniuk and Oleh Plotnytskyi stepped up, and turned the tables (19-17), but just for a moment, as Czechia did not give up. Even though they were close to tying the set score, Illia Kovalov put the end of “the discussion”. The
Czechs served better until then, three to one aces, but the Ukrainians were more
potent in attack, 30 to 20 winning spikes, and were delivering a better performance on the blocking (6-4) with. Both sides had identical service reception of 49%. The only thing that the Ukrainians offered the Czechs were the unforced mistakes, 18 to 13.

Czechia refused to lose the match just yet, as starting better in the third set (6-2), showed nothing was over for them. Both sides began “a cat-and-mouse” fame (11-11, 13-13, 18-18, 20-20), but the better performance on the serving line (three aces) sealed the deal for the Czech team - Galabov made it up for his error in the first set, acing for 22-21, while Marek Sotola recorded a direct set point.

The Czech Republic entered even more motivated the fourth set (9-4), but Ukraine got back on their feet (10-9). However, thanks to great concentration, and resilience in the difficult moments, Czechia could maintain their leadership position, even if with only one point. Strong serves in the deciding moments, turned out to be the key to set-success.

Inspired, the Czech players completed the comeback, “knocking out” Ukraine in the tie-break (10-4), as the players of Ugis Krastins suffered in their attacks (12 to six for Czech in this set). An ace by captain Adam Zajicek gave Czechia the first match-point. Ukraine denied it, but it wasn’t enough.

“We are very happy because in the first two sets, it looked like that we would lose. Then, maybe the opponents got a little bit tired, and stopped with the strong serve. It was our chance. With good reception and a good side-out - that’s how we won the game!”

“It was a good match. The Czech played really good. They fought for every ball. They won deservedly, they have to play for the Gold. It wasn’t our goal to fight for the Bronze, but we will fight and we want to leave the competition with a medal.”