Year in Review: Europeans celebrate busy season on the sand

The 2022 season was certainly one of the most special ever for European beach volleyball as, besides competing in a memorable edition of the EuroBeachVolley, players from the continent benefited from CEV’s efforts to add more elite-level events to the region’s annual schedule and were also able to test themselves in the new CEV BeachVolley Nations Cup and the CEV Queen & King of the Court European Finals. 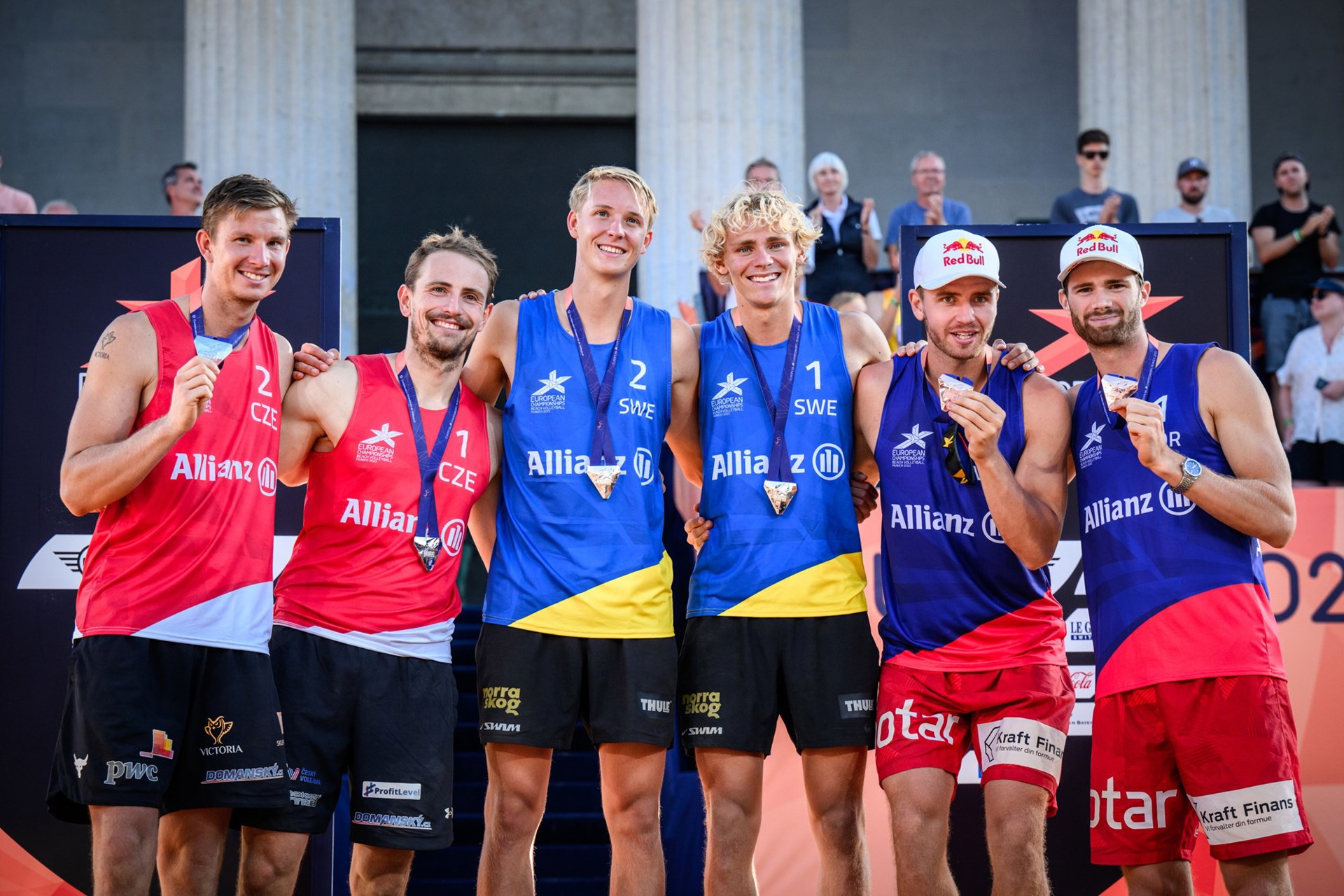 Teams from the Czech Republic, Sweden and Norway at the podium at the EuroBeachVolley

The recently-created tournaments have both unique formats and proved to be exciting additions to the European calendar, fitting perfectly with the traditional EuroBeachVolley, which in 2022 had a memorable 30th edition.

For the first time ever, the EuroBeachVolley was played as a part of the European Championships, joining eight other disciplines in the multi-sport event that took place in Munich from August 11-21. Having the event in that context in a beach volleyball power like Germany brought an amazing vibe to the tournament, which led to absolutely exciting matches reuniting the 64 men’s and women’s teams that got on the court at the iconic Königsplatz. 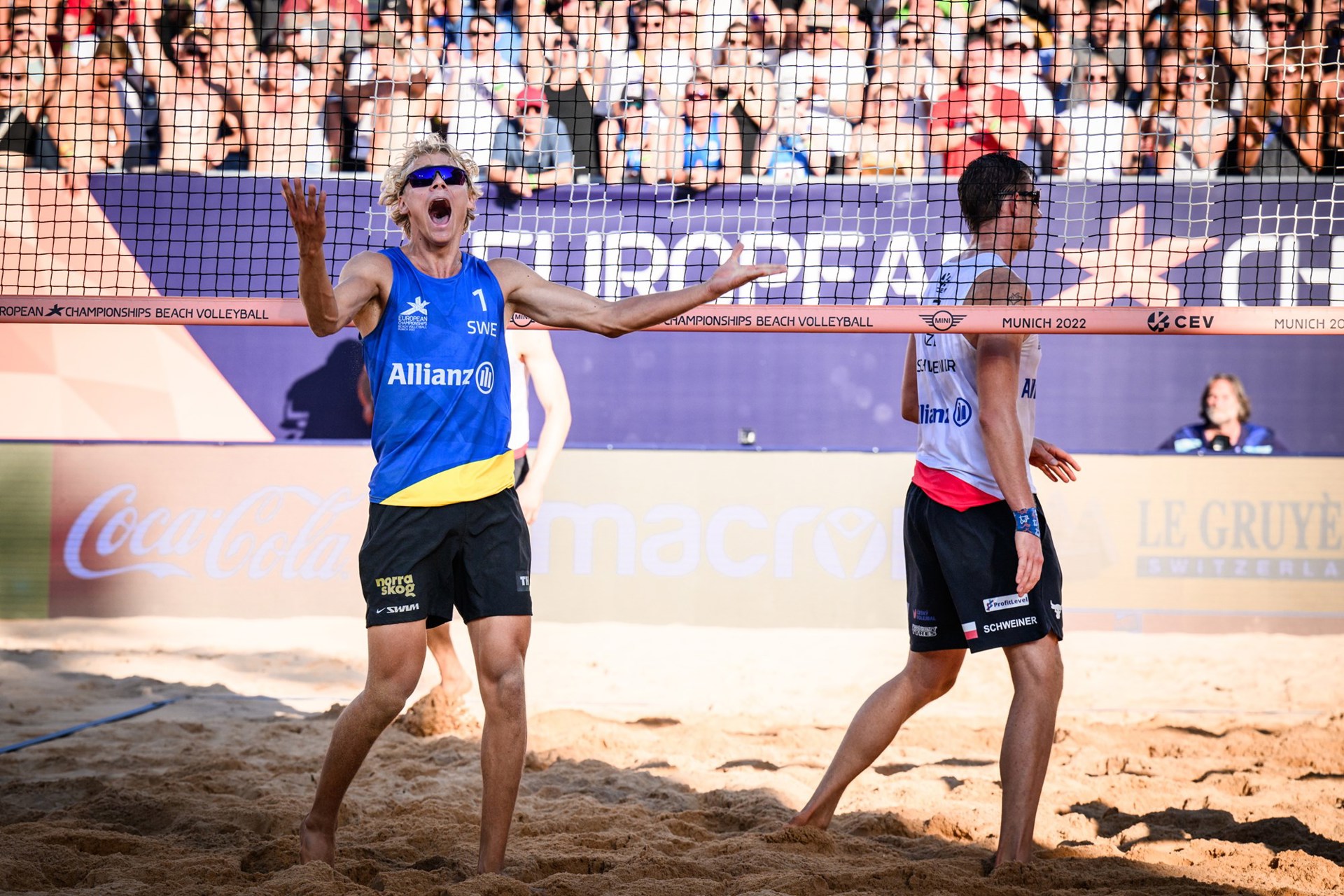 The men’s tournament saw the unlikely victory of Swedish wonderkids David Åhman and Jonatan Hellvig, who at the age of 20, won the fans with their exciting playing style and overcame the strong competition from the top teams in the continent to give their country its biggest accomplishment to date in beach volleyball.

Åhman and Hellvig had a dominant performance in the gold medal match, where they topped Czech Olympians Ondrej Perusic and David Schweiner, but their most impactful success happened in the semifinals, when they downed reigning Olympic and world champions Anders Mol and Christian Sørum, denying the Norwegians the opportunity of winning their fifth-straight EuroBeachVolley title. The Vikings ended up in third place.

“It feels unbelievable. We knew they would be a very tough team to beat, but we played incredibly well. I’m very proud of what we did.” 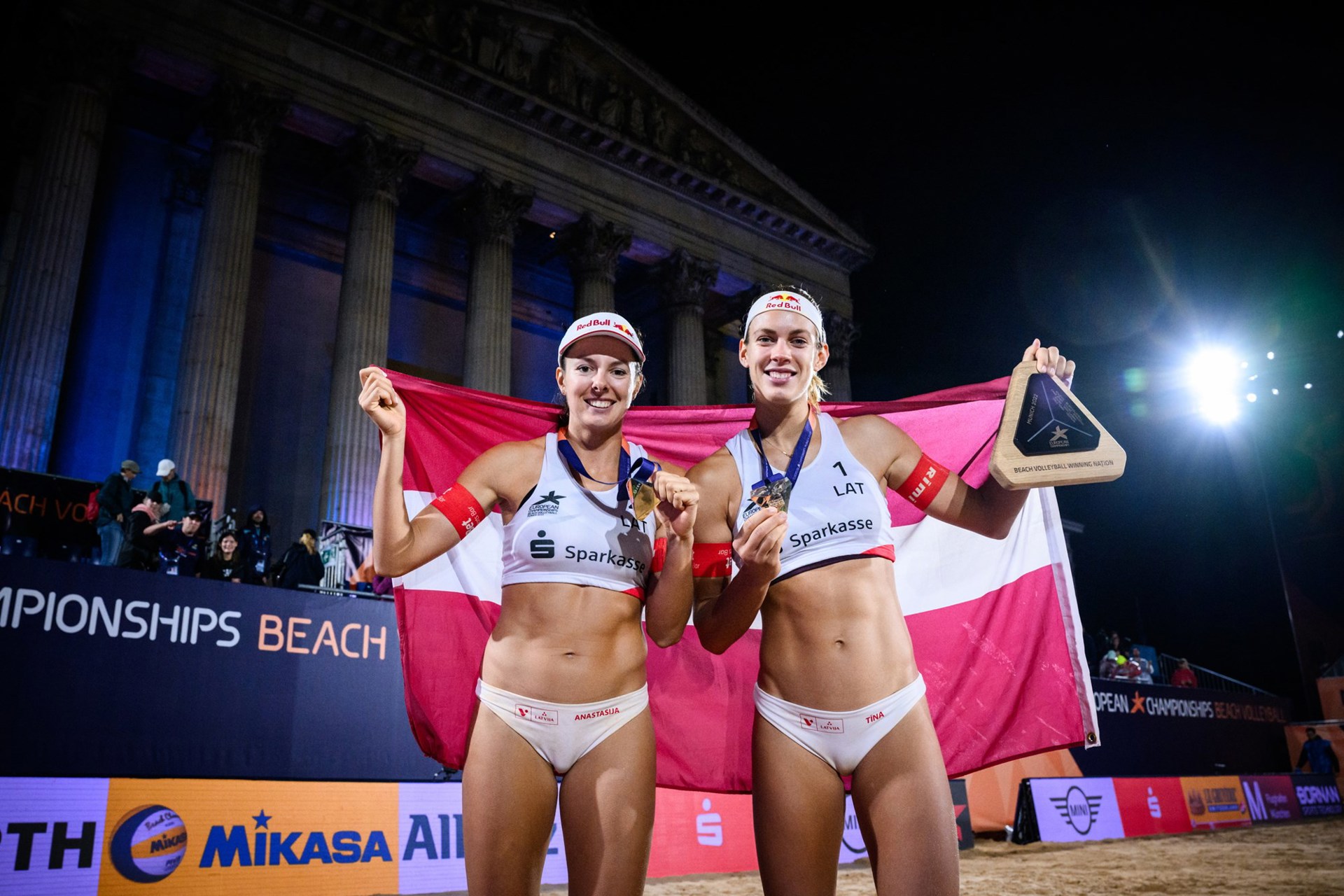 On the women’s side, Tina Graudina and Anastasija Samoilova took Latvia back to the top of Europe when it comes to women’s beach volleyball, winning their second EuroBeachVolley title in just four years – they were also the winners in 2019.

The Latvians, who made it to the semifinals of last year’s Tokyo Olympics, dethroned defending champions Nina Brunner and Tanja Hüberli in a dramatic three-set gold medal match in which they dropped their only set in the entire tournament. Dutch Raisa Schoon and Katja Stam finished third.

"We're very proud! This is unbelievable, a really magical moment for us!"

The city of Vienna, which had been the last one to host the EuroBeachVolley, was tasked with welcoming the inaugural edition of the Beach Nations Cup and, as has been the norm with the Austrian capital, it delivered yet another spectacular event from August 2-7.

The country-vs-country format, which pitted the eight top European nations in each gender against each other, proved to be a great success, generating exciting battles and getting the fans on the edge of their seats all week long. 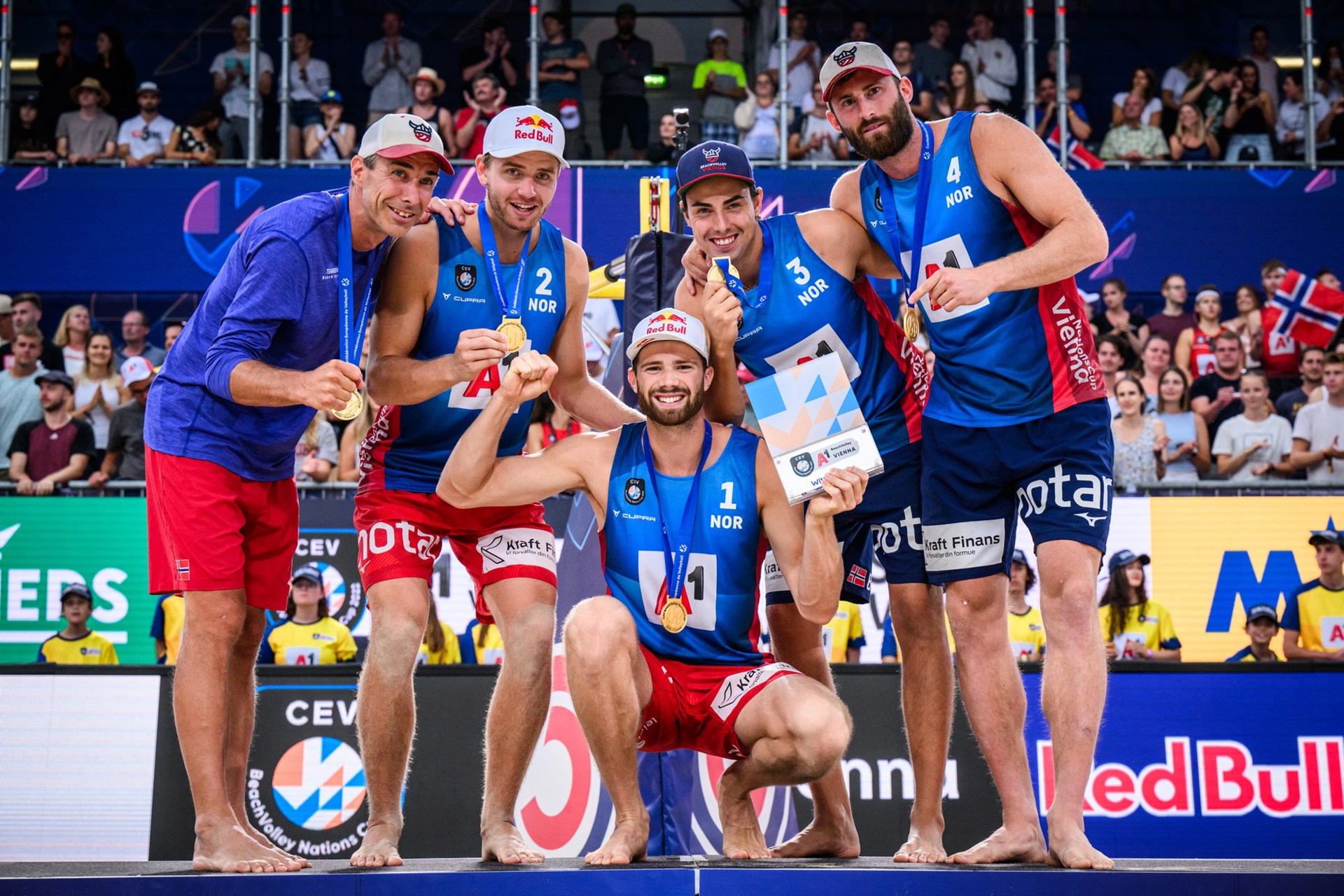 The Norwegian quarter formed by Anders and Hendrik Mol, Sørum and Berntsen poses with the trophy

Norway were the winners on the men’s side, Mol and Sørum driving the four-men that also featured Hendrik Mol and Mathias Berntsen to a golden-set victory against the Italian quartet formed by Paolo Nicolai, Samuele Cottafava, Adrian Carambula and Enrico Rossi in the final at the Red Bull Beach Arena.

“This is amazing. We need to thank the fans, they gave us the energy to push through in every single match and give our best. And also the Italians for a great battle. We were hungry for revenge after losing to them in pool play. I’m happy to get that win and also to stand here with the BeachNationsCup trophy. The team did a great job.” 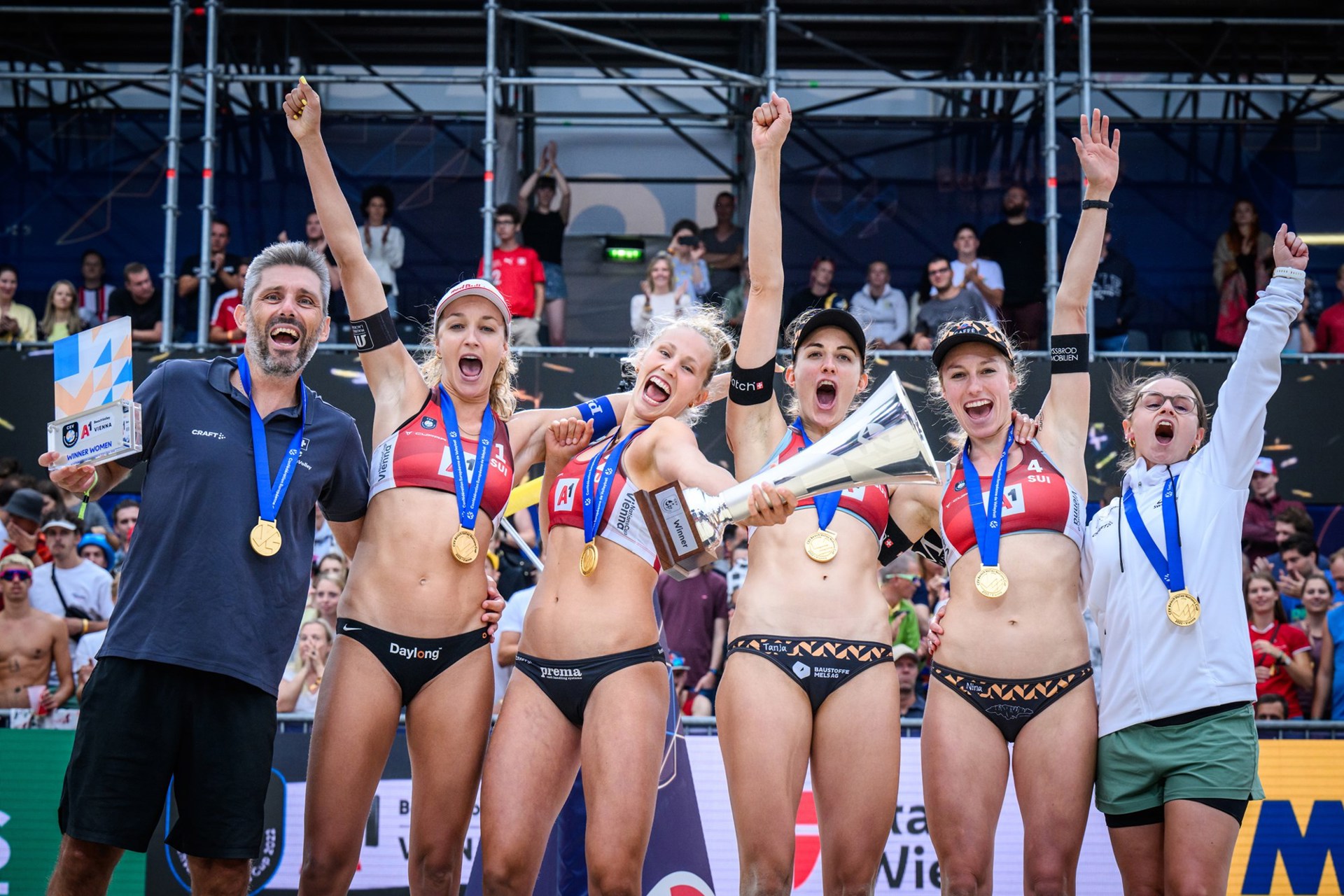 The women’s tournament had two of the winningest beach volleyball nations in Europe facing each other in the final and, despite the absence of injured Olympic medallist Joana Heidrich, the Swiss team of Nina Brunner, Tanja Hüberli, Anouk Vergé-Dépré and Menia Bentele got the best of Germans Karla Borger, Julia Sude, Cinja Tillmann and Svenja Müller to triumph.

“It was so much fun. We were a little nervous at the end of the second set and we almost gave our lead away. Having our coach on the court on our side was super helpful in that moment. This tournament was so much fun, especially with us retuning to Vienna. It couldn’t be any better.”

Queen and King of the Court European Finals

The continental season officially came to an end from September 6-11, when the Dutch city of Utrecht hosted the first Queen & King of the Court European Finals. A partnership between CEV, Dutch promoter Sportworx and the Dutch Volleyball Federation (Nevobo), the event reunited the top players in the continent to battle in the fast-paced, exciting format created by the Queen and King of the Court. 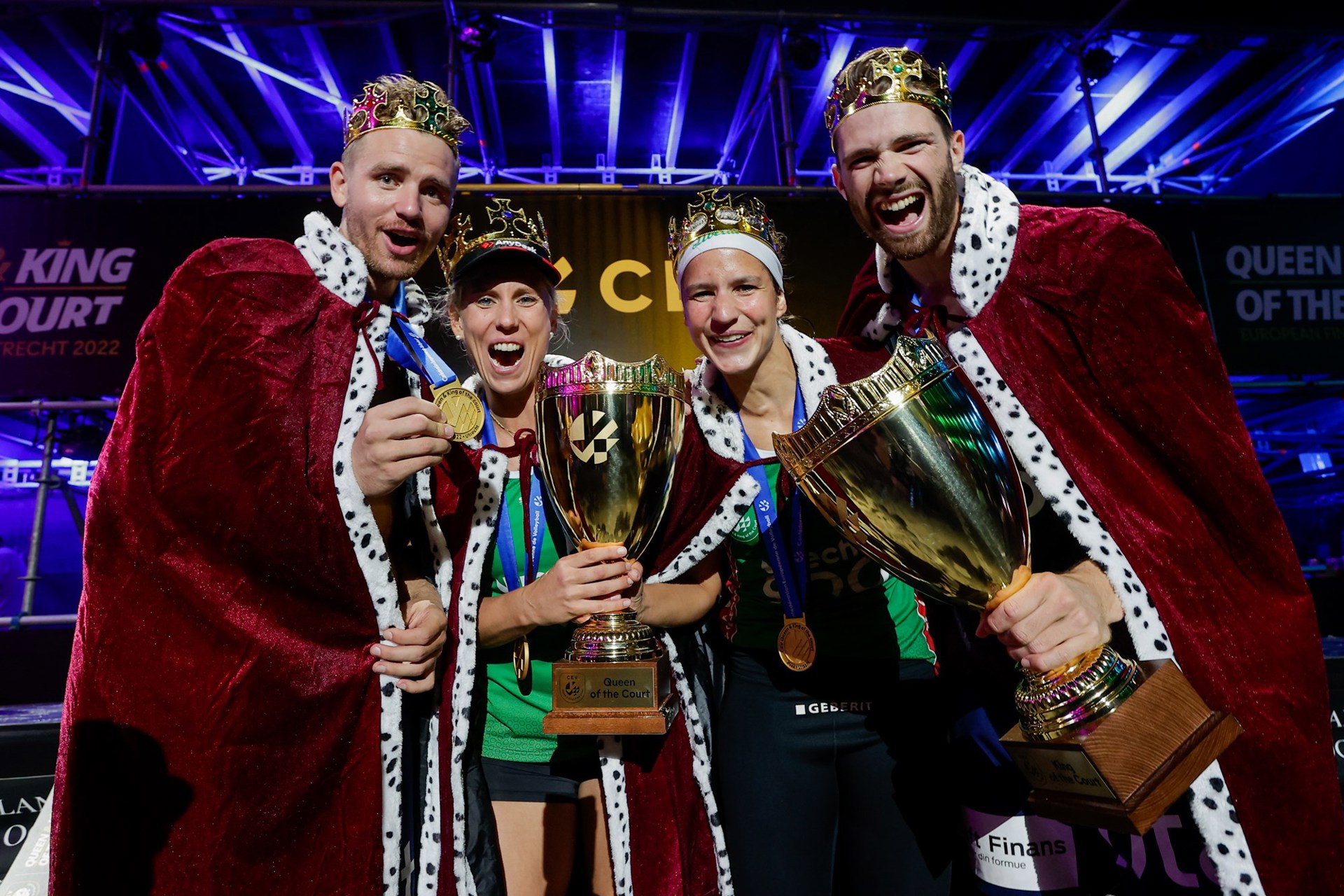 Norwegians and Germans earned the crowns in Utrecht

Mol and Sørum proved that a great ‘regular’ beach volleyball team can also be a great King of the Court team with their victory in Utrecht. In the final round, they got revenge over second-placed Åhman and Hellvig and also overcame Estonians Kusti Nolvak and Mart Tiisaar in order to become the first player to hold CEV EuroBeachVolley, CEV Nations Cup and European King of the Court titles.

“We didn’t have the golden ball today and we were really unsure about how things would play out because it had helped us in every round. We were a little bit nervous and we were behind in all three rounds. It wasn’t pretty, but we got the points that we needed to win the trophy.”

The women’s tournament, on the other hand, showed that temporary partnerships can also go a long way with the victory of Karla Borger and Chantal Laboureur. The Germans are both defenders and never partnered during their careers, but still found a way to overcome Brunner and Hüberli and secure the crowns. It was an emotional victory for Laboureur, who had announced just a few weeks before the event her decision to end her career at the end of the season.

“We entered the final determined to not look at the clock and play and see what would happen. I felt that maybe it made us play a little more relaxed. I was really exhausted after the playoffs and I wasn’t sure how well I’d be able to play. I think we just got into a rhythm, kept siding out and didn’t think too much about it. It’s funny to win it with Chantal because we’ve known each other for about 20 years and we’ve always been opponents.”