Young rising Beach Volleyball stars Maria Voronina/Mariia Bocharova of Russia and Sweden’s David Åhman/Jonatan Hellvig have added another accolade to their rapidly growing list of honours – as they emerged victorious from the final day of competition at #EuroBeachVolleyU22 in Baden.

Voronina and Bocharova needed two sets only to beat reigning U20 European champions Anete Namike and Varvara Brailko of Latvia in the semis (21-18, 21-16) – with Dutchwomen Raïsa Schoon and Emi van Driel looking just as dominant in the other semi-final where they thumped U18 European champions Anhelina Khmil and Tetiana Lazarenko of Ukraine 21-14, 21-15.

After this setback, Khmil and Lazarenko regrouped to claim the bronze medal following a 2-1 victory (21-16, 17-21, 15-11) over Brailko and Namike. The gold medal match pitted the two event pre-favourites, with Voronina and Bocharova losing their first set in the tournament as Schoon and Van Driel stormed to a 24-22 first set win. Bocharova helped the Russian side change gear in the second set, where they claimed a four-point lead and despite a late Dutch comeback, Voronina and Bocharova sealed a 21-18 victory. The tiebreak was another close battle, where Voronina helped Russia break away and claim a 15-12 victory to secure the gold medal. This way, Voronina and Bocharova claimed back the title they had previously won in 2019 – before settling for the silver medal last year. 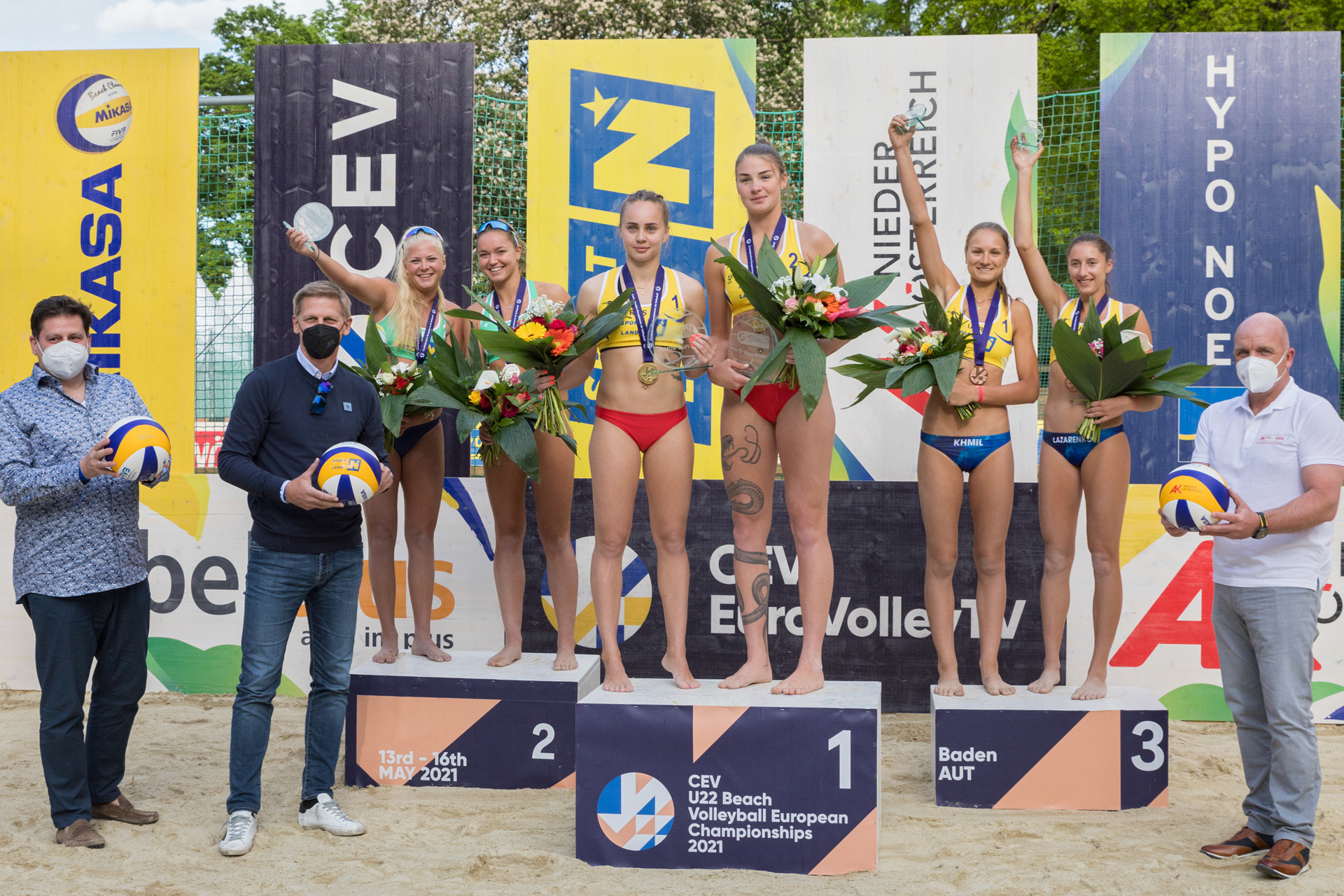 Teams from Russia, the Netherlands and Ukraine compose the women's podium in Baden

Åhman/Hellvig resumed their quest for gold with a truly impressive performance in the semi-final, where they thrashed two-time defending champions Alexey Gusev/Pavel Shustrov of Russia 21-14, 21-13. Arturs Rinkevics and Ardis Bedritis of Latvia advanced to the gold medal match as well, but they had to work a lot harder to achieve this feat in a semi-final against last year’s silver medallists Milosz Kruk and Mikolaj Miszczuk of Poland (23-21, 19-21, 15-11).

In a repeat of last year’s gold medal match, Gusev/Shustrov beat Kruk/Miszczuk 21-15, 21-18 – to finish the event in style and with the bronze medal after securing back-to-back titles in 2019 and 2020. In the men’s final, the Swedes had to come from behind in the first set before Hellvig delivered a show at the net with his blocks. Åhman/Hellvig showed their class in the second set to seal a 21-18, 21-16 victory. Their triumph in Baden completes a full collection of age group European titles – to go with their gold-medal winning performances in the U18 and U20 categories in 2018 and 2020, respectively. Moreover, the young David and Jonatan won gold at the 2018 Youth Olympics in Buenos Aires, Argentina. Sweden, Latvia and Russia make up the men's podium of this year's #EuroBeachVolleyU22