France earned their maiden title at the Golden European League - Women after triumphing over Czech Republic in straight-sets at Palais Des Sports ORLEANS. The hosts, who completed the 2022 edition undefeated, were dominant in all components. Their leader and the Most Valuable Player (MVP) of the tournament, Lucille Gicquel amazed with her performance in the final match, scoring as many as 20 points, including the most important one - the gold medal point. 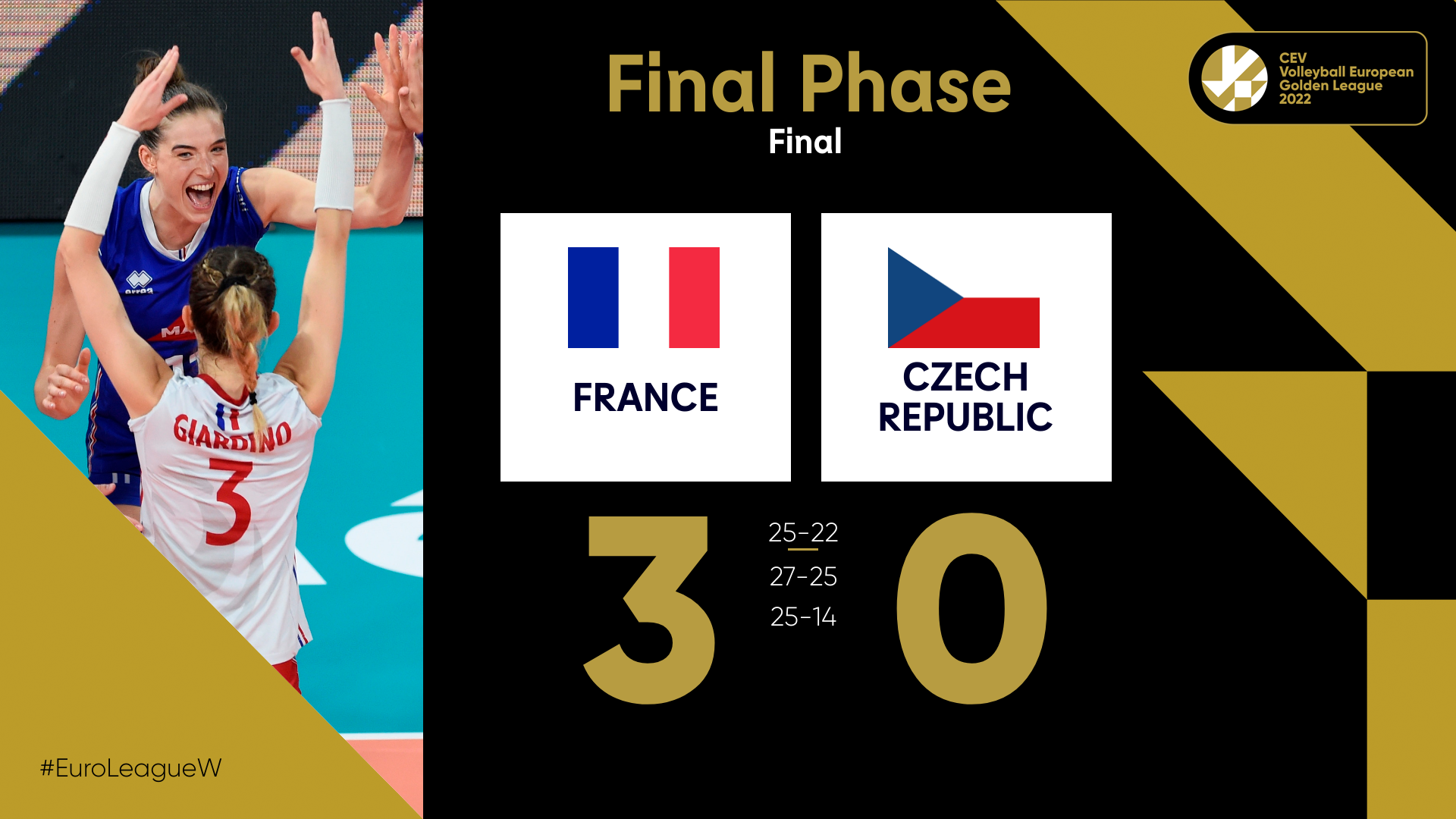 The hosts, sparked by their home crowd and powered by Lucille Gicquel (6 points) and Amandha Sylves (5 points), enjoyed a flying start to the match, taking a 6-1 and 14-8 lead. So big advantage dulled their vigilance abit, and Czech Republic with Denisa Pavlinkova on the service line made up the gap to tie at 18-18. After a short period of the point-by-point game, France scored two points in a row with winning blocks - actually this element made the difference in the opener 4-1 - and the hosts closed the set after a spike from Leia Ratahiry.

The second set was way more competitive from its very beginning. Although France was far from playing flawlessly (10 own mistakes), the teams created a great spectacle for the fans, filled with passionate rallies. Gabriela Orvosova was the leader of Czech Republic and it was the guest team to have the first set ball, but France denied it and the game was prolonged into extra-time. Eventually, the hero of France - Gicquel, who tallied in total as many as 10 points in the second set (70% of success in attack) sealed the deal by stopping the rival's spike with the block.

The hosts immediately ran away with the score in the next set, reaching an eight-point advantage at 13-5. But the Czech Republic knew that it was do or die and with all their efforts and Katarina Valkova on serve reduced the gap, scoring five consecutive points. It was a stimulus for France, who shifted up and re-built their advantage and never looked back, earning historic title after winning the set 25-14. Gicquel who topped the scorers' chart with 20 points, was the one to score the point that gave her team the maiden title. She recorded in total 14 kills, 2 blocks, 4 aces and 58% success in attack and was awarded with the MVP award. Orvosova was the top scorer for Czech Republic with 11 points to her name.

There is only happiness tonight. I'm really happy and proud to be a part of this team. We won the Golden League, but we had to fight really hard, because Czech Republic played really well.

We wanted to fight for the gold medals and in the end we failed after two close sets. But I think we fought to the last ball and I'm proud of the whole team for how we handled the whole journey here. After a lot of travelling, we made it here, enjoyed it and after five weeks of hard work we come back home with silver medals and with our heads up.