The runners-up of the EuroVolley 2019 are looking forward to this year's edition to fight for the European crown again. After a successful and promising performance in their rookie campaign at the VNL 2021, when Slovenia proved that with no doubt they belong to the world's elite finishing 4th, the Slovenian top players Tine Urnaut, Dejan Vincic, Jan Kozamernik and Mitja Gasparini with full commitment have run a number of Volleyball camps to spread their passion for Volleyball and knowledge among children all across their homeland. Many of their teammates visited the camps as guests to encourage the young Volleyball adepts.

It all started with the captain of team Slovenia Tine Urnaut shortly after their remarkable success at the EuroVolley 2015, which they completed – like two years ago – with silver medals starting their story of success. "After the 2015 European Championships some people contacted me and told me 'let's do a camp' and I was really excited, because when I was a kid I went to these kinds of camps and I loved it. Every camp was a great experience, I learnt a lot and met many new people – coaches and players, so I wanted to give this kind of opportunity to all young Volleyball enthusiasts in Slovenia, because until that point there was no Volleyball camps in Slovenia for a period of 10-15 years, we had only beach volleyball camps, so it is where the idea came from. It was a perfect moment and I caught the way" – said Urnaut. 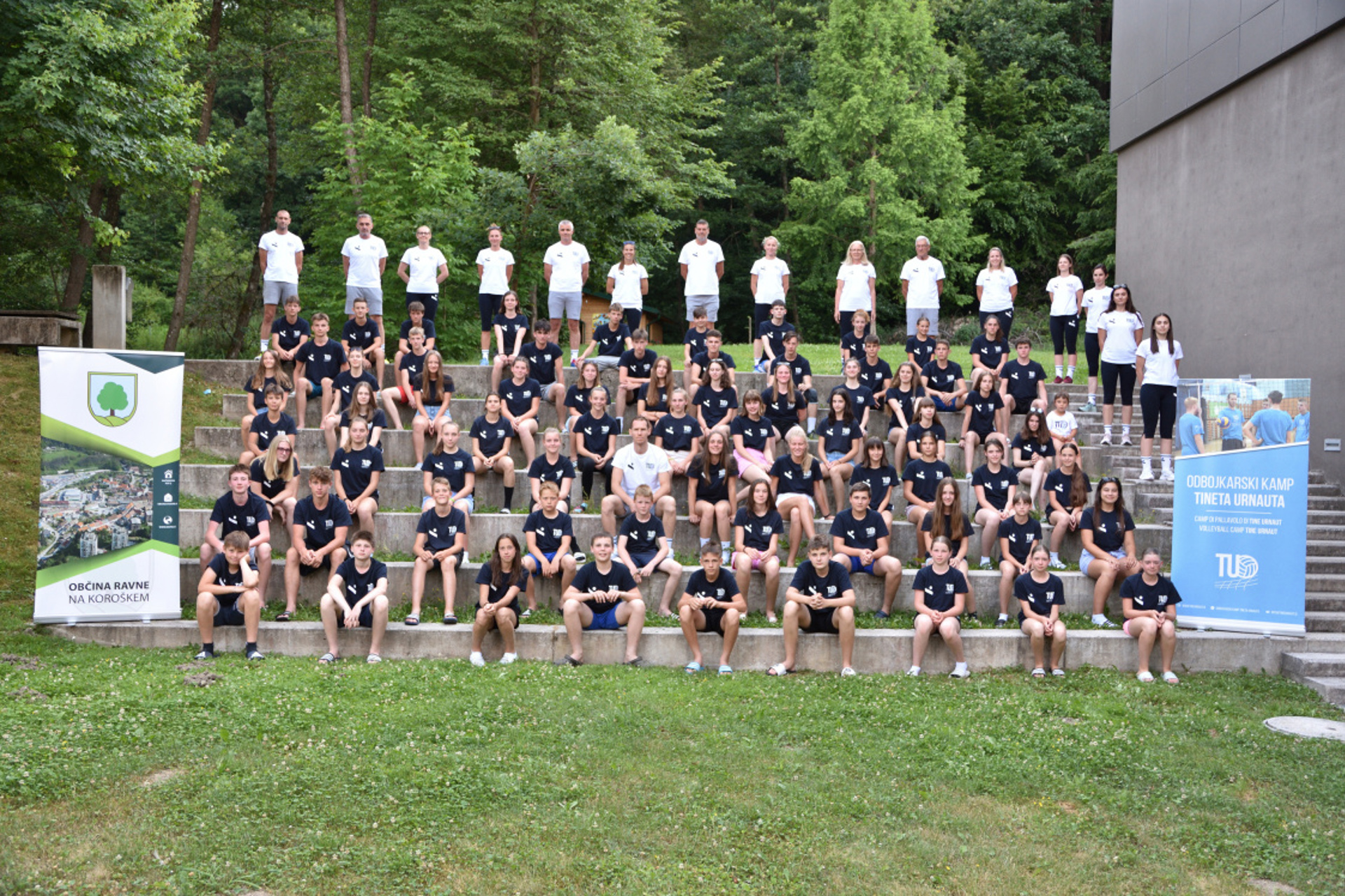 He has seized the opportunity perfectly, as this year he organised the 6th edition of the camp, which was held in his hometown Ravne na Koroškem. Although his first camp back in 2016 was located in Kranjska Gora, later he decided to move it to the place where he made his first volleyball steps. So far, more than 450 children had an opportunity to master their skills under the watchful eyes of the Slovenian captain. "Each edition is very special, we have many young girls and boys who want to learn Volleyball and it's a great fun" – he emphasised. However, this one was a challenging one, as it started during the final phase of the VNL, so he joined it straight away after his arrival: "We arrived at one o'clock at night and in the next morning I went to the training. It was not easy, but all my family is involved in this project, I have my brothers as coaches, also some of my friends. My mother has been the main organiser, she stays behind everything. She did an amazing job in every aspect and without her it would not be possible for me. They were running the camp already for two days, so I needed to come in quickly, but I got a lot of energy back from the kids, all the enthusiasm that was there helped me a lot."

Led by the example of the captain, his teammates decided to organise the camps on their own, too. Slovenian setter Dejan Vinčić started the second edition on Monday (July 19) in Nova Gorica. "I had this idea in my mind already for the last few years, but it was difficult to manage everything. We usually spend the whole summer with the national team and then we have 2-3 weeks off, so it's not easy, especially when you have kids as you want to spend this time completely with them 100%. I was observing Urnaut’s camps and how all these things work, how good it is, how great of a response it gets and I was thinking why don't we have more camps like that. When I was a kid, we basically didn't have an opportunity to meet our idols, players who you watch on TV and I can imagine how great it is to have one week with players you look up to" – admitted Vinčić.

It turned out that the pandemic season 2020 had a silver lining. "Last summer we had so much time, because everything was cancelled due to Covid-19 that I said it's the perfect time to start. I also decided that I will do it every summer, I didn't want to do it one season and not the next one. I dedicated myself to doing it every year. For now, the response has been amazing, the kids are happy and we are happy. I was so excited to meet kids on Monday. We have an even bigger group than last year, as 75 kids applied. At the end of my first camp I was so fulfilled. Nothing can compare or replace this feeling, it's really amazing when you see kids being happy and enjoying the camp, also my teammates from the national team came to spend time with them. For kids, if I put myself in their place, it's unbelievable, they are watching us on TV and then we are with them. For me personally, it's difficult to describe with words this feeling how great it is to fulfill someone's dreams and help him to become better, as at the end of the day it's not only fun, but they come here to learn something new."

After these words, there is no surprise that other players, who were the guests in previous years, have organized their own events in 2021. Mitja Gasparini, the most-capped player in the national team of Slovenia (206), made his debut as a host of the camp in his hometown Izola, on the Adriatic coast starting it, like Urnaut, straight away after coming home from the ‘Bubble’. "I organized the camp for the first time, but I collaborated during the other events in the past. I was a guest during Tine Urnaut's camps and last year I visited Vinčić's camp with my daughter. When I saw all the kids being so happy and willing to learn and have a good time playing together, I decided to do it in my hometown, too. To get back to the roots, and also because in Izola a long time ago we had a few clubs, now it’s just one team. I wanted to show where I come from and encourage kids to play Volleyball and other sports, as we also had guests from other sports. It’s a really great job, of course exhausting, but when you see smiling and happy kids you know that you did a good job" – he explained.

During the camps that last around one week each, children not only practice Volleyball improving their skills under the guidance of their idols, but also have an opportunity to enjoy other sport activities, get answers from their heroes to all the questions they ever wanted to ask, visit the local attractions and learn more about sports and a healthy lifestyle. The players have been fully involved in all activities during the camps spending time with kids from early morning until night. The 25-year-old Slovenian middle blocker, Jan Kozamernik hosted his first camp in Ljubljana two weeks ago. "I was thinking about what I can do for my hometown, my community, where I grew up and where I started to play volleyball and I thought this would be a good idea. This is why I connected with my first club and my elementary school, so we practiced at the gym where I used to train. It’s about giving back to the community. I tried to give a lot of energy to the kids, especially to motivate them to be passionate about Volleyball or something else. I tried to explain to them how it is to be a professional Volleyball player, so they could understand what challenges they have to face, what are good things and also bad ones about being a professional Volleyball player. But first of all, I tried to motivate them to find something that they really like – in general, in life – because if you find something that you love, like I found Volleyball, it's a lot easier to go and work every day for the goals that you have set. I tried to transmit this message. If they will be Volleyball players after our camps, it will be perfect and we all are going to be super happy, especially for Slovenia as it's such a small country" – said Kozamernik.

Jan Kozamernik with participants of his camp in Ljubljana

Slovenian players show excellent teamwork not only on the court. All the 'organisers' visited other camps and could count on the support from the rest of the Slovenian national team. Klemen Čebulj, Gregor Ropret, Jani Kovačič, Tonček and Žiga Štern along with other players were among the guests during the camps this summer. "We made volleyball popular in Slovenia, we share information with each other and visit each other's camps. You can see different things and try to take them to your camp. We are supporting and helping each other. We try to not make the camps at the same time, so it means that if one kid wants to attend a few camps it’s doable. We are not competing with each other, we are proud that we are doing it. Tine was a pioneer starting it when Volleyball was not so popular, but now we are happy that more players get involved" – pointed out Vinčić.

“Since I started playing with the national team, I always had this dream that one day we would play in the World League, that we would go to the best tournaments achieving big results there, that Volleyball would become more popular in Slovenia. And all our hard work is paying off, the things which we have been doing through the years and which we are doing now have raised the interest in Volleyball, especially after the EuroVolley 2019 held in Slovenia...

... These camps help young kids to learn something new, to be in contact with Volleyball through the summer. I am happy that my teammates decided to do this, because it also proves that there is a lot of interest, there are many young kids that want to learn this sport and it's all for a great future of Volleyball in Slovenia."

"Family photo" from the first edition of Mitja Gasparini's camp