Bulgarian pairs topped both the men’s and the women’s podiums at the EUR 10,000 Marina Dinevi Beach Volleyball Tournament to delight the home fans in Sveti Vlas over the weekend. The experienced Desislava Nikolova and Irena Mishonova did not drop a single set on the way to their second gold on this year’s Bulgarian National Tour. The newly formed pairing of Dimitar Dimitrov/Dimitar Kalchev triumphed with the men’s trophy in an as emphatic fashion. The picturesque setting of Venid Beach near the Marina Dinevi yacht port on the Bulgarian Black Sea coast welcomed 12 women’s and 15 men’s duos, thus accounting for players from five different countries. In addition to the many Bulgarian participants, athletes from Kazakhstan, Spain, Ukraine and USA also took to the two competition courts in Sveti Vlas.

The first-ever FIVB-homologated event on the Bulgarian National Tour took place over three competition days under perfect sunny weather on Friday and Sunday and rain on Saturday, which only made the nail-biting sand battles even more dramatic.

Nikolova and Mishonova, who had already won gold at the first Tour stop two weeks earlier in Sofia, repeated their achievement in Sveti Vlas, cruising to the top of the podium on five consecutive straight-set victories. In Sunday’s final, the second-seeded duo shut out another Bulgarian pair, fourth-seeded Stefani Kyoseva/Simona Nikolova by 2-0 (21-11, 21-18). The bronze went to top-seeded Americans Jade Race/Lydia Smith, who claimed a hard-fought 2-1 (21-17, 19-21, 15-9) win over Bulgaria’s Iveta Stanchulova/Emileta Racheva in the bronze medal match.

“I think we did well although we still have a lot to work on and a lot to win. This place is so beautiful and the organisation was the best so far this season. I hope it all continues in the spirit of mutual respect between players and promoters so everything can stay as wonderful…” 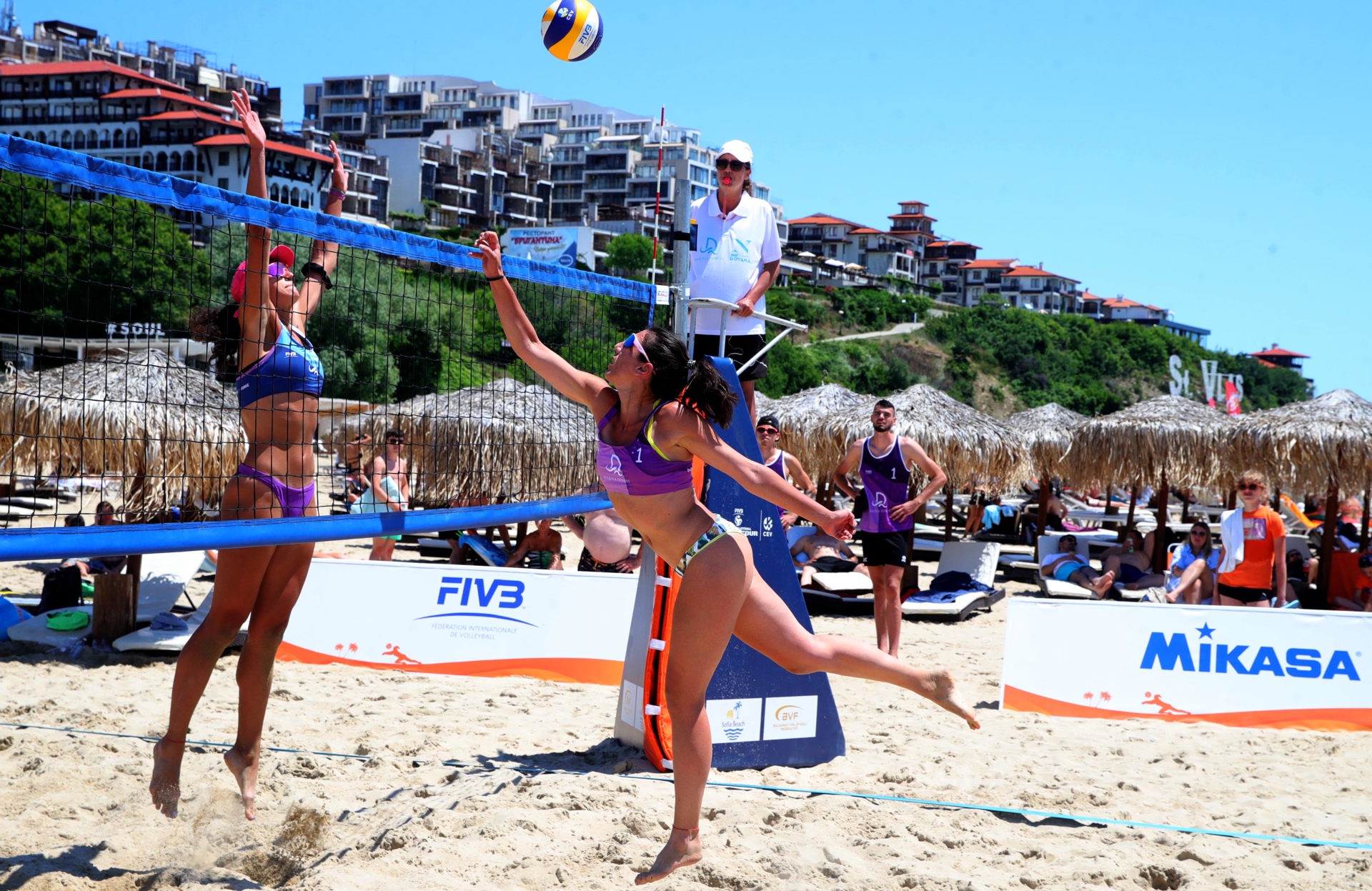 The 206-cm-tall opposite of the Bulgarian national volleyball team and Italy’s Consar RCM Ravenna, Dimitar Dimitrov, accepted the invitation by one of Bulgaria’s most talented beach volleyball defenders Dimitar Kalchev to join him on the sand and the new pair managed to win their very first tournament together, also without dropping a single set in five matches played.

Playing as seed two in the main draw bracket, Dimitrov/Kalchev produced a 2-0 (21-15, 21-16) upset of the top-seeded duo of experienced beach stars Milen Stoyanov and Miroslav Gradinarov, both former BVA Balkan champions and Bulgarian national champions, to top the all-Bulgarian men’s podium and rejoice with the trophy. Third-seeded Hristo Kolev/Georgi Bratoev, the Best Setter of the London 2012 Olympic volleyball tournament, snatched the bronze after a 2-0 (21-17, 21-17) win over the tournament’s sensations, 17-year-old Yasen Stanev and 16-year-old Alexander Tsanev, in the third place match. 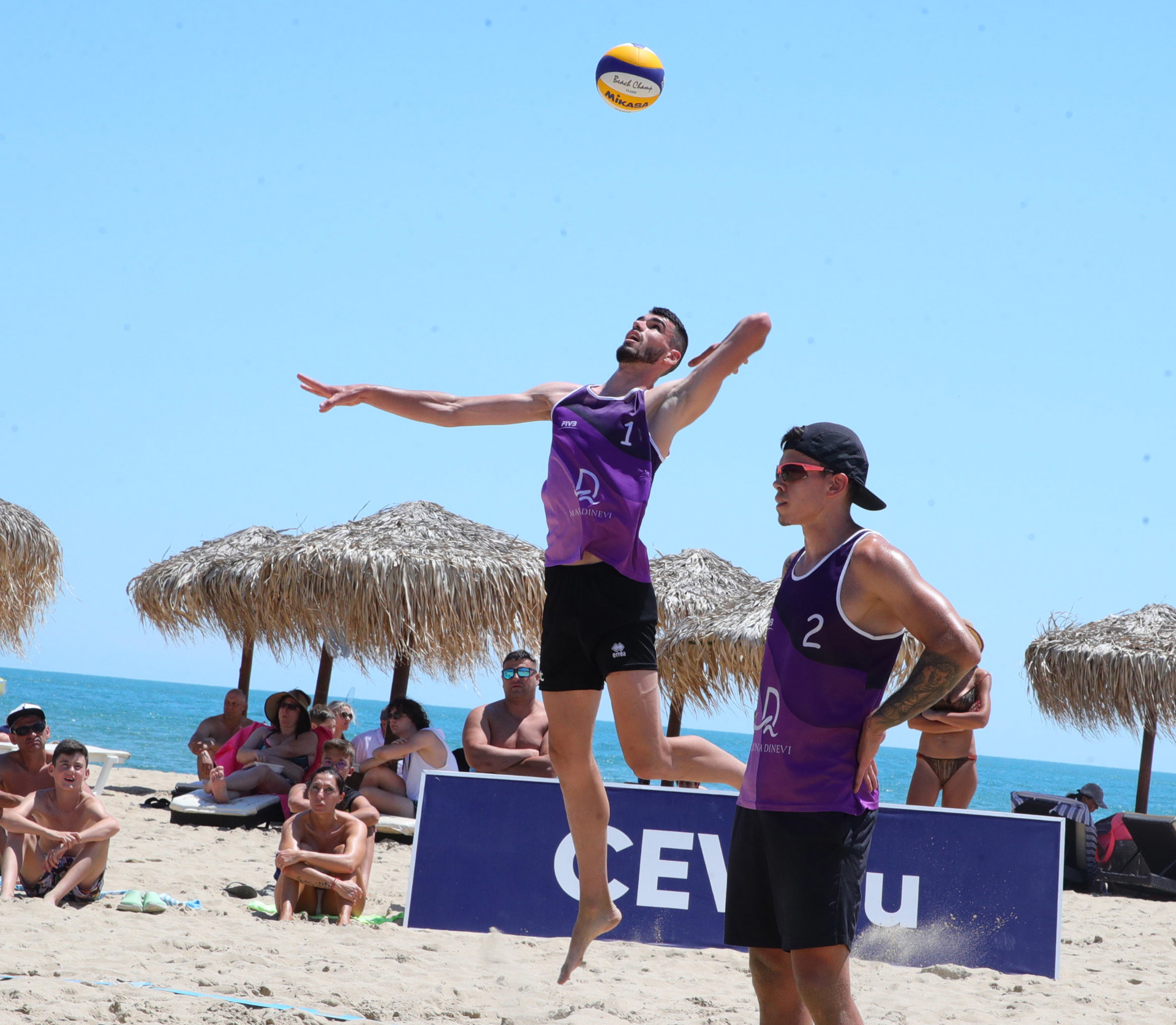 “First, we would like to thank the promoters, because they set an example for everybody else in Bulgaria of how to organise a beach volleyball event. I am happy we persevered mentally and physically. We were well motivated to show our best.”

“We played strong and reached our goal. For me, Miro and Milen were the favourites and we thank them for a great performance,” 21-year-old Dimitar Dimitrov showed his respect for the prominent opponents.

The tournament was organised under the auspices of the Bulgarian Volleyball Federation by Nu Boyana Film Studios and their CEO Yariv Lerner.