Home teams with mixed feelings as pre-favourites impress at #EuroBeachVolleyU22

The 2021 edition of #EuroBeachVolleyU22 presented by SPORT.LAND.NÖ started on Thursday with the first round of matches in the group stage – and the teams dealing with challenging weather conditions, including strong winds and rain. Laurenz Leitner/Laurenc Grössig, who carry Austria’s hopes of home glory in the men’s competition, caught a good start in the event with a 2-0 victory against a team representing Croatia. As for the remaining home tandems, i.e. Theo Reiter/Timo Hammarberg and Ben Stockhammer/Jacob Kitzinger, they lost to strong opposition from Russia and Poland, respectively.

There were few surprises involving the potential medal favourites. The reigning U20 European champions David Åhman/Jonatan Hellvig of Sweden, who have returned to Baden where they won the 2018 edition of the CEV Youth Continental Cup, easily claimed their match against Romania. Last year’s #EuroBeachVolleyU22 silver medallists Rudy Schneider and Simon Pfretzschner of Germany beat a team from Finland. The English brothers Javier Bello and Joaquin Bello did not live up to the expectations, as they lost their opening match to a team from the Netherlands, Leon Luini and Matthew Immers. 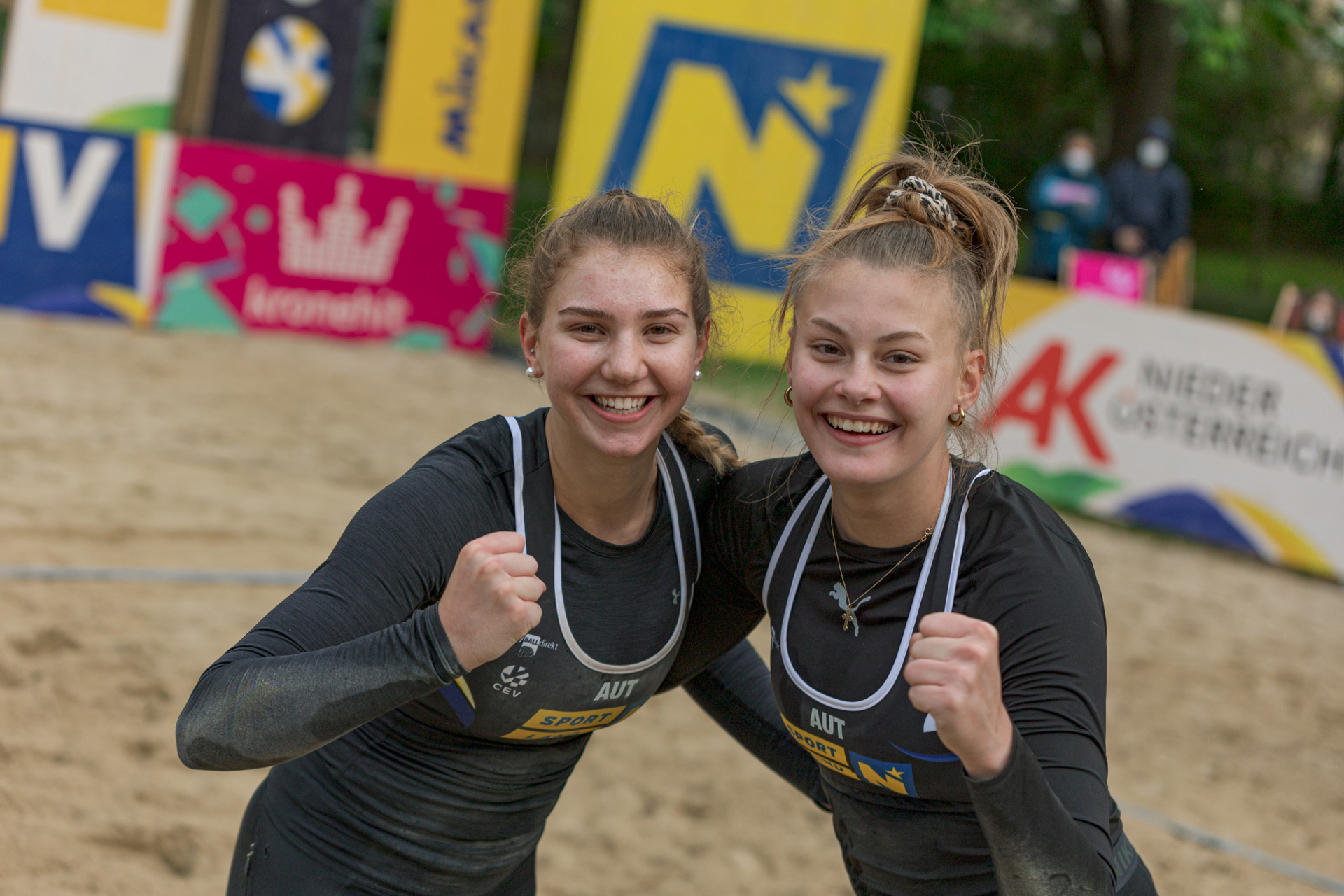 The top women’s team from Austria, Ronja Klinger and Julia Mitter lost both of their pool matches to Spain and Denmark. Magdalena Rabitsch and Anja Trailovic lost their opening game against Switzerland, but they could succeed against Romania later in the day. Marie Bruckner and Lina Hinteregger, the third Austrian team in the competition, remained winless at the end of the day.

The top favourites from Russia Maria Voronina/Mariia Bocharova won against the Czech Republic as well as against their own compatriots Elizaveta Ludkova and Arina Riazhnova. Raïsa Schoon, who earlier this year finished first at the Nations Clash in Düsseldorf, is fighting for a podium finish in Baden with partner Emi van Driel. The young Oranjes started their journey with easy wins over teams from Latvia – more specifically reigning U20 European champions Anete Namike and Varvara Brailko – and France. The silver medal winners from last year’s #EuroBeachVolleyU20, Mara Betschart and Annik Stähli of Switzerland, on the other hand, lost two matches in a row. Claudia Scampoli/Valentina Gottardi of Italy registered two wins over teams from Lithuania and Croatia. Scampoli is back in action in Baden after competing in the CEV Continental Cup Phase 2 event held last week at the same venue. Svenja Müller/Anna-Lena Grüne from Germany are currently top of Pool E, whilst in Pool F teams from Poland and Lithuania will battle for the top spot on Friday.