Swiss women to meet in Tokyo’s Round of 16

A draw performed after the conclusion of pool play at the Shiokaze Park Stadium on Saturday has determined the path of the 15 European teams (six women’s and nine men’s) that remain alive in the Tokyo Olympics and has set up some interesting matchups for the Round of 16 in both genders.

One of them will reunite the two Swiss teams qualified for the Games as Nina Betschart and Tanja Huberli, who went undefeated to win Pool F, will meet Pool B runners-up and reigning EuroBeachVolley champions Joana Heidrich and Anouk Verge-Depre. The Tokyo Round of 16 match will mark the fifth meeting between the Swiss in international tournaments and the score is currently even at 2-2.

Another All-European duel in the Round of 16 will pit Russian Olympic Committee’s Nadezda Makroguzova and Svetlana, who won all their matches on Pool E, against Latvians Tina Graudina and Anastasija Kravcenoka, who defeated Kenya’s Gaudencia Makokha and Brackcides Khadambi 2-0 (21-6, 21-14) to win their second match on Pool D. 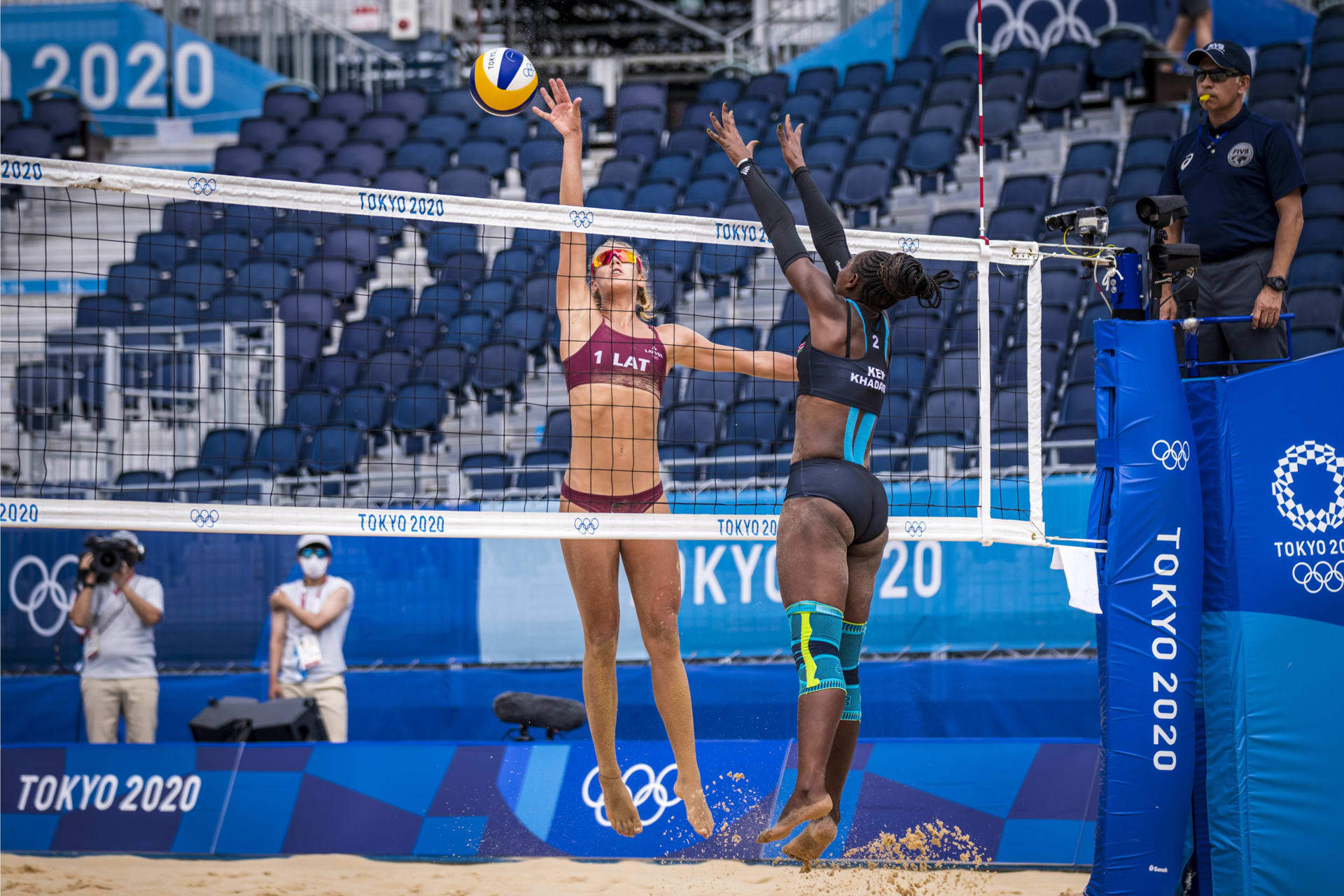 Graudina hits in the match that guaranteed the Latvians in the Round of 16 (Photo: Volleyball World)

Russians and Latvians have met twice in international beach volleyball competition, including in the final of the 2018 U-22 European Championships, and Makroguzova and Kholomina have won in straight sets in both occasions.

Reigning Olympic champion Laura Ludwig will meet a familiar face in the Round of 16 as German partner Margareta Kozuch and her will play against Brazilians Agatha Bednarczuk and Duda Lisboa after finishing second on Pool F. The series between the teams is tied with one victory to each side.

Ludwig and Agatha were opponents in the gold medal match of the Rio 2016 Olympics when the German star and then-partner Kira Walkenhorst defeated Agatha and Barbara Seixas to become the first European team to top the podium at the Games. The two veterans have been playing each other since 2007 and Ludwig has had more success, coming out on top in 11 of the 16 duels between them. 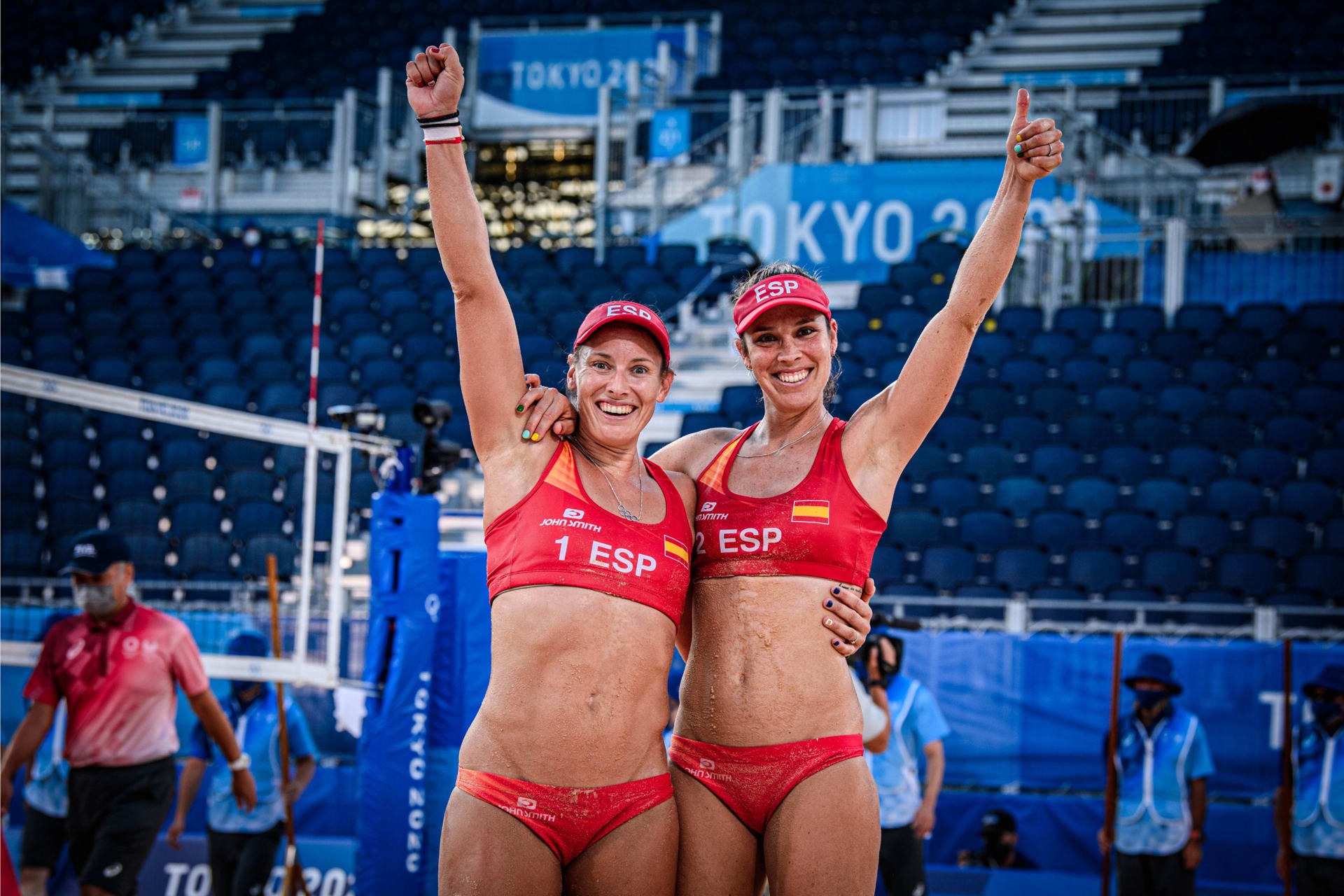 The sixth European team guaranteed in the Round of 16 is the one Spanish Liliana Fernandez and Elsa Baquerizo. The three-time Olympians were third on Pool B and had to play in the ‘lucky loser’ round, where they eliminated Japanese Miki Ishii and Megumi Murakami in two sets (21-15, 21-10).

They will now face reigning world champions Sarah Pavan and Melissa Humana-Paredes of Canada, a team they only played twice, winning once and losing on the other occasion.

“They are maybe the very favourite team in this tournament. They are world champs and very stable in the tour. We know it’s going to be a tough match. We’ll have to give our best to beat them. We’ll try to come out strong.”

Also on the ‘lucky loser’ round, Dutch Katja Stam and Raisa Schoon were eliminated after they were defeated by Cubans Leila Martinez and Lidiannis ‘Lidy’ Echeverria in straight sets (17-21, 17-21).

The Final day of the pool stage of Tokyo 2020 men’s Olympic beach volleyball tournament had its tense moments as teams looked to book the final places in the knockout stages. Among those still having to push just a bit harder were the World Champions representing the Russian Olympic Committee, Viacheslav Krasilnikov and Oleg Stoyanovskiy. 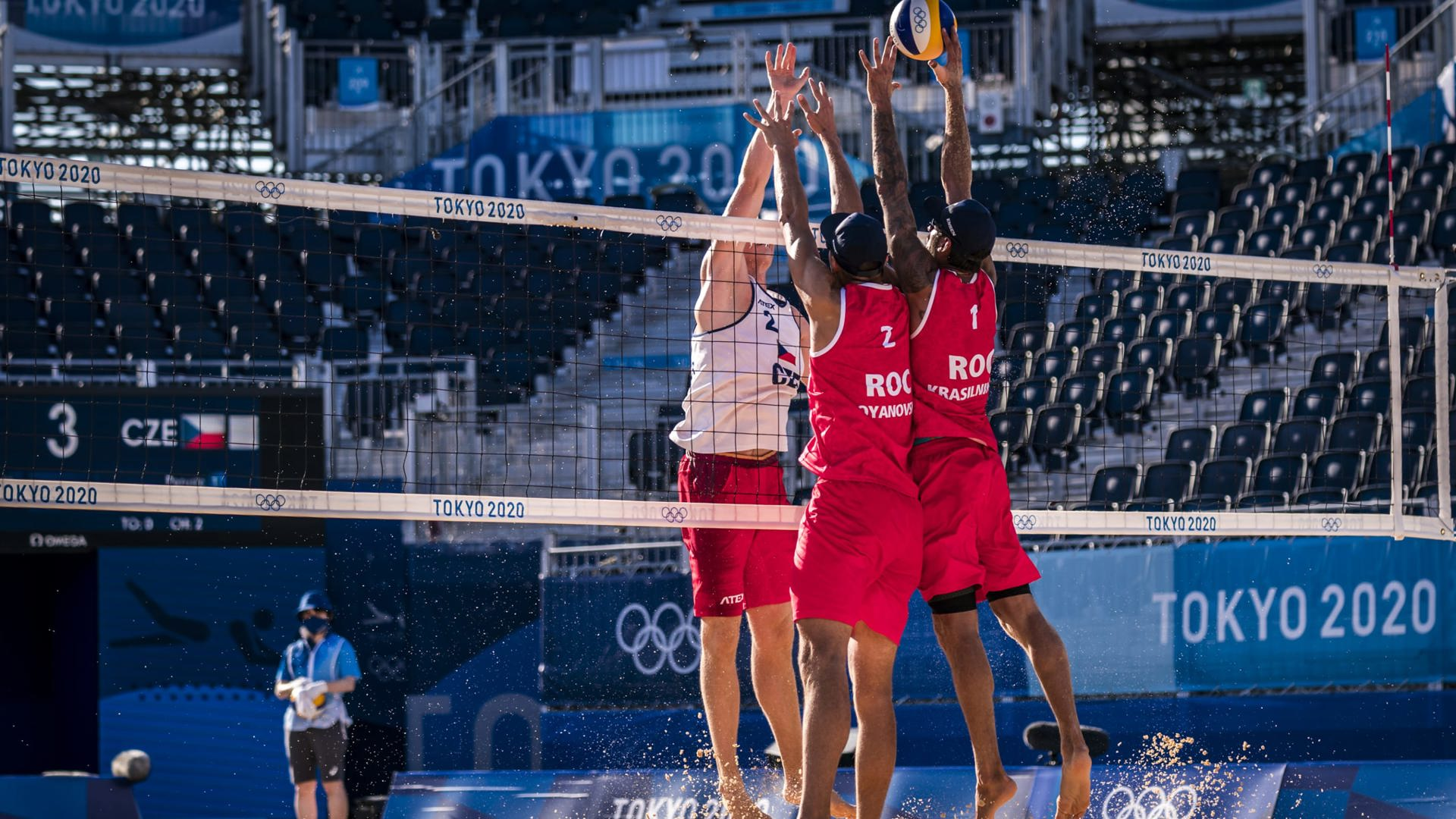 Unusual double-block from the World Champions

The pair’s matchup against Ondrej Perusic and David Schweiner from the Czech Republic could not have started any worse as they narrowly lost the first set and were facing a realistic possibility of being knocked out of the competition. However, the World Champions got back in the game and pushed towards a 2-1 win (19-21, 21-13, 15-8) that guaranteed first place in their pool.

“We are number one in the pool, but before the match we could have finished fourth. No pressure! Just an opportunity for us to get on top of the pool. And we took it.”

In the eight finals, Krasilnikov and Stoyanovskiy will face the Spanish duo of Pablo Herrera and Gavira Collado who got the better of the Polish team of Kantor/Losiak in a hard fought lucky-loser match in 3 sets (29-31, 21-19, 7-15). Disappointment for the Polish Team, out of Tokyo 2020

Elsewhere on the day, Germany’s Thole and Wickler needed only two sets (21-16,21-11) to defeat the Japanese pair of Yusuke ‘Gottsu’ Ishijima and Katsuhiro Shiratori and secure their place in the next stage of the competition from the second spot in Pool F, where they will go against the Americans Jake Gibb & Tri Bourne.

The final match of the day saw Switzerland’s Heidrich/Gerson go up against Chile’s Grimalt M./ Grimalt E. in the second lucky-loser match that was to decide the final team to go through to the eight finals. Unfortunately, the Swiss couldn’t match the energy of their opponents and had to concede defeat in just two sets (21-1, 21-18) and bow out of the tournament. Not enough from the Swiss duo to go through

With nine European teams qualified into the next round, we will be seeing three All-European battles giving the guarantee of minimum three representatives of the continent in the Quarter Finals.

*Matches to be played on Sunday and Monday (1-2 August)