12 teams ready to fight for the #EuroVolleyU20M crown

After an exciting Volleyball summer in the underage groups, the last event for 2022 in the age group European Championships is set to take place in the course of the next days. The 12 top men’s teams U20 will meet in Italy, in the picturesque Adriatic resorts Montesilvano and Vasto, where from September 17 to 25 the Final Round of the CEV U20 Volleyball European Championship 2022 - Men, will be happening. The U20 European Championship Finals will return to Italy for the first time since the 2000 edition. 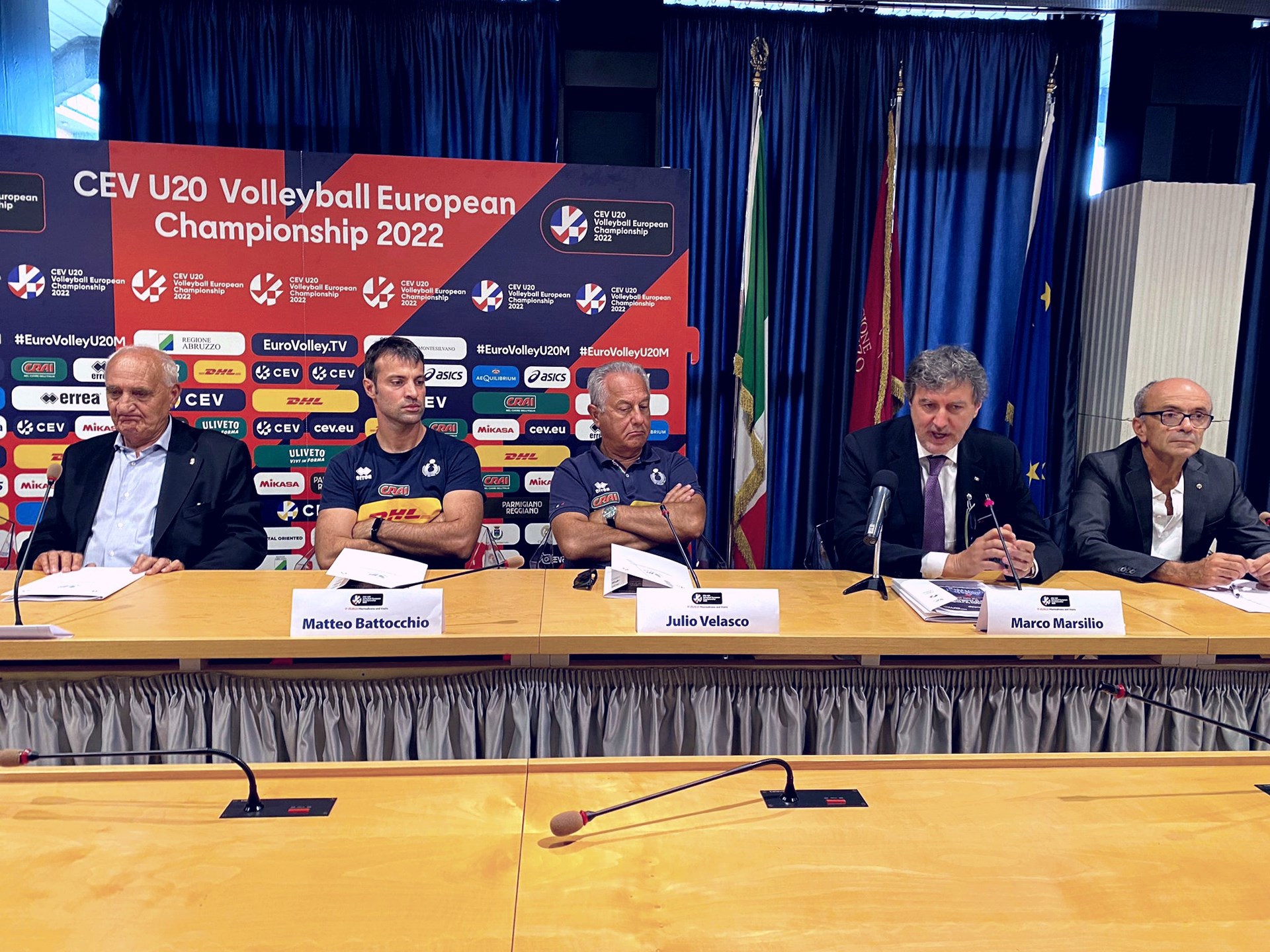 The hosts from Italy won the silver medals two years ago, when the championship took place in Brno (Czech Republic), counting then on some of today’s big stars of Italian Volleyball - such as Alessandro Michieletto. Italy will aim at achieving an unprecedented clean sweep, as after claiming the titles in all underage categories, the only missing trophy is the one in the U20 category.

Much is at stake, as besides the trophy and the recognition as the best European team in this underage category, the winner together with the highest classified teams, not already qualified, from the CEV U20M Volleyball European Championship, will qualify for the FIVB U21 Men Volleyball World Championship 2023, according to the vacancies granted by FIVB to Europe (two slots to CEV).

12 teams, composed by players born on January 1st 2003 or thereafter, will lock horns on the road to achieving the big goal.

The 12 qualified teams are divided into two pools. 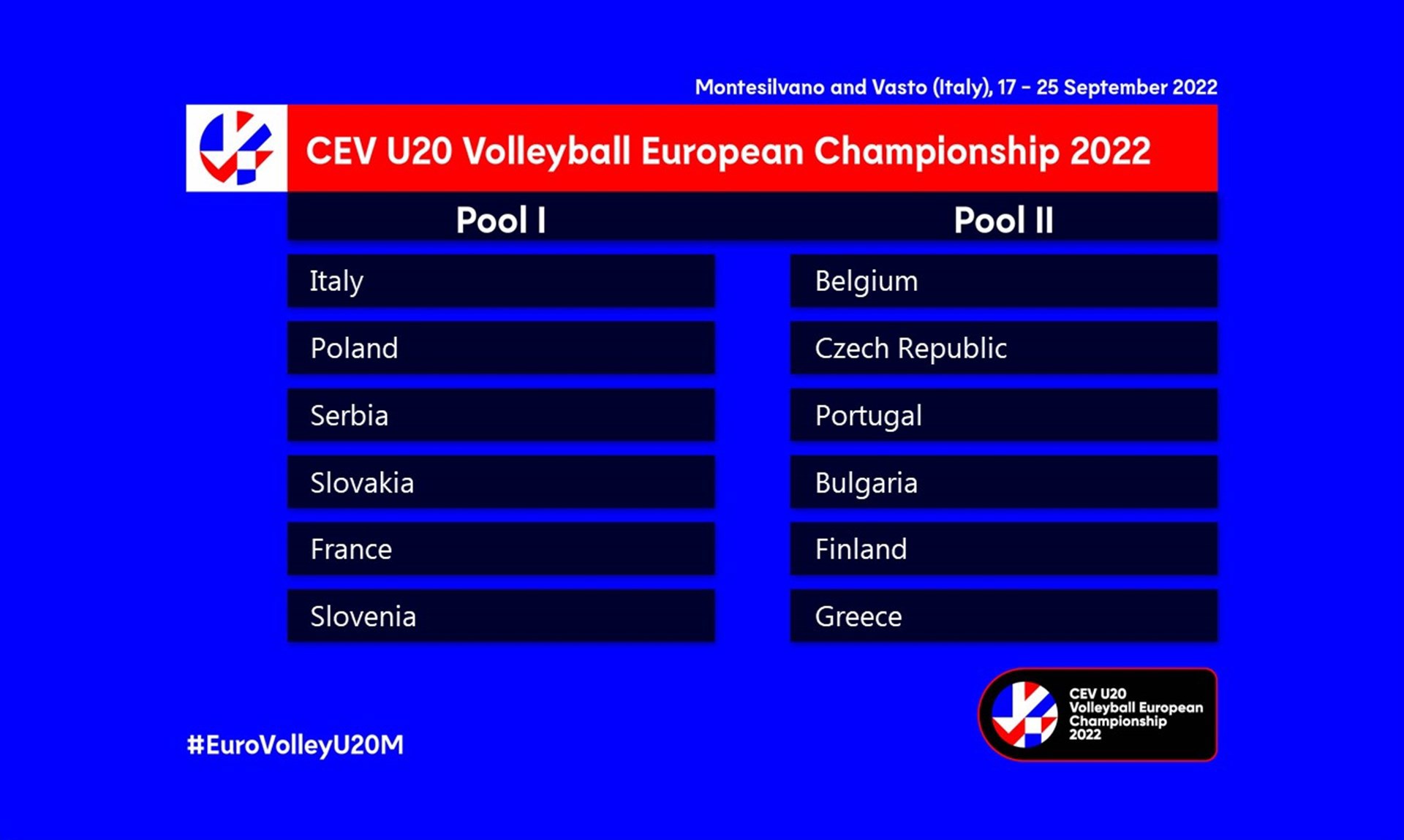 The two best teams from each pool will play at the semifinals 1-4, while the third and the fourth from each group qualify for semifinals 5-8. The winners from semifinals 1-4 proceed ahead to the Gold Medal Match, and the losers enter the battle for the Bronze.

The Road to the Final Round

Italy will enter the battles motivated to show their full potential, and to write a new page in the history of the 2022 Italian Volleyball Summer.

“We have a great group and it has been wonderful to be able to work with these players. They have been working hard and for sure, you can expect that they will be playing with glowing hearts. We represent a National Federation that has been doing a great job. We obviously have high expectations and we would like to improve. We will be taking to the court in order to give everything so that we can make it as far as possible in this competition.”

Qualified teams as winners from the 2nd round tournaments

Pool B in Poland

Poland hosted the Qualifier in Pool B, meeting the teams of Spain, Türkiye and Ukraine. With two straight sets victories and one 3-1, they booked their ticket to the Final Round.

Kacper Ratajewski became the team’s top scorer in this Qualifiers campaign. He played in three matches (11 sets) and scored 47 points (4.27 average per set)

Following in Poland’s steps, Serbia also won the Qualifier they hosted as they faced France, Greece and Austria. However, they had it more difficult, as they secured a place at the Final Round after two tie-break wins and one 3-1.

Luka Stankovic performed in three matches (10 sets), and recorded 46 points, meaning he would score an average of 4.6 per set.

Portugal played host to a Qualifier tournament on home soil, locking horns with Germany, Israel and Switzerland. Impeccable, the hosts did perform on a high note, recording as many as three 3-0 wins out of three matches.

Nuno Marques played all nine sets of his team, and finished as Portugal’s best scorer - 47 points and an average of 5.22 per set.

Czech Republic proved better than the hosts Latvia, Slovenia and Romania. They recorded two straight-sets wins and one 3-1, finishing on first place in the group.

David Kоllator was Czechia’s main weapon in the Qualifiers campaign, finishing as the team best scorer - 47 points in 10 sets (4.7 average per set).

U19 vice world champions, Bulgaria didn’t disappoint home crowds in the Qualifier that took place in Sofia. They did not leave any chances to their opponents from the Netherlands, Denmark and Estonia, beating them all at 3-0, and flying to the Final Round. Just before the start of #EuroVolleyU20M the Bulgarians won the Balkan Championship, and are ready to enter the European Championship battles.

Vladimir Garkov led the team in this Qualifiers campaign, becoming the top scorer, with 36 points to his name in nine sets (an average of 4 per set).

Hosts Croatia couldn’t do their job right in the company of Belgium, Sweden and Hungary. The Young Red Dragons instead secured a place at the Final Round after recording three victories (two by 3-1, and one by 3-0).

Basil Dermaux amazed with 62 points in 11 sets, meaning that scored an average of 5.64 per set.

Slovakia was above all in Pool H, where they played Finland, Norway, and hosts Montenegro. The Slovak team recorded two 3-2 victories, and one 3-1 on their road to the Final Round.

Erik Gulak contributed the most for booking the ticket to the Finals - he scored as many as 42 points in 11 sets (3.91 average per set).

Teams qualified from 3rd Round

Pool I in Greece

Greece hosted the 3rd Round Qualifier in Pool I, in the company of France, Sweden and Germany. The last chance to book a ticket at the Final Round was seized by team France who recorded two straight-sets victories and one 3-1.

The hosts also secured a spot at the most important matches, after finishing second in the Pool.

Nathan Canovas took part in five games (played in 15 sets) and finished as France’s best scorer - 63 points and an average of 4.2 per set.

Finland, Slovenia, Spain and the Netherlands entered the deciding battles. It was the team of Finland who found their way to the first place in the group, and with two 3-1 victories and one 3-2 joined the 12 teams at the Final Round.

Slovenia locked the second position in the group, also securing a spot at the Final Round.

Luka Martila of Finland took part in three matches only (13 sets), but this didn’t stop him to finish as the team’s best scorer  - 77 points and an average of 5.92.

Nik Mujanovic of Slovenia performed in five matches (21 sets), finishing with as many as 107 points (5.1 average per set).

Many interesting matches coming up next, as some of the future stars of men’s European Volleyball will fight for the title at #EuroVolleyU20M. Follow the action live on EuroVolley.TV (from semifinals on), and keep updated on the dedicated webpage&on our social media channels.

All those interested in attending the semifinals and finals scheduled in Montesilvano on Saturday 24 and Sunday 25 September will be able to purchase tickets at the following link.