The Golden #EuroLeagueM Final Four fairytale concluded with a happy ending for the Czech Republic, as they are the newly crowned champions of the CEV Volleyball European Golden League - Men. On Sunday, they dethroned the back-to-back champions from Türkiye, outperforming them at 3-1, claiming their first title in the competition since its maiden edition back in 2004. 18 years later, the Czech Republic finish on the top of the podium, followed by 2019&2021 champions Türkiye, while the hosts from Croatia are left with the bronze medals, as they survived a five-set thriller against 2021 silver medallists Ukraine. 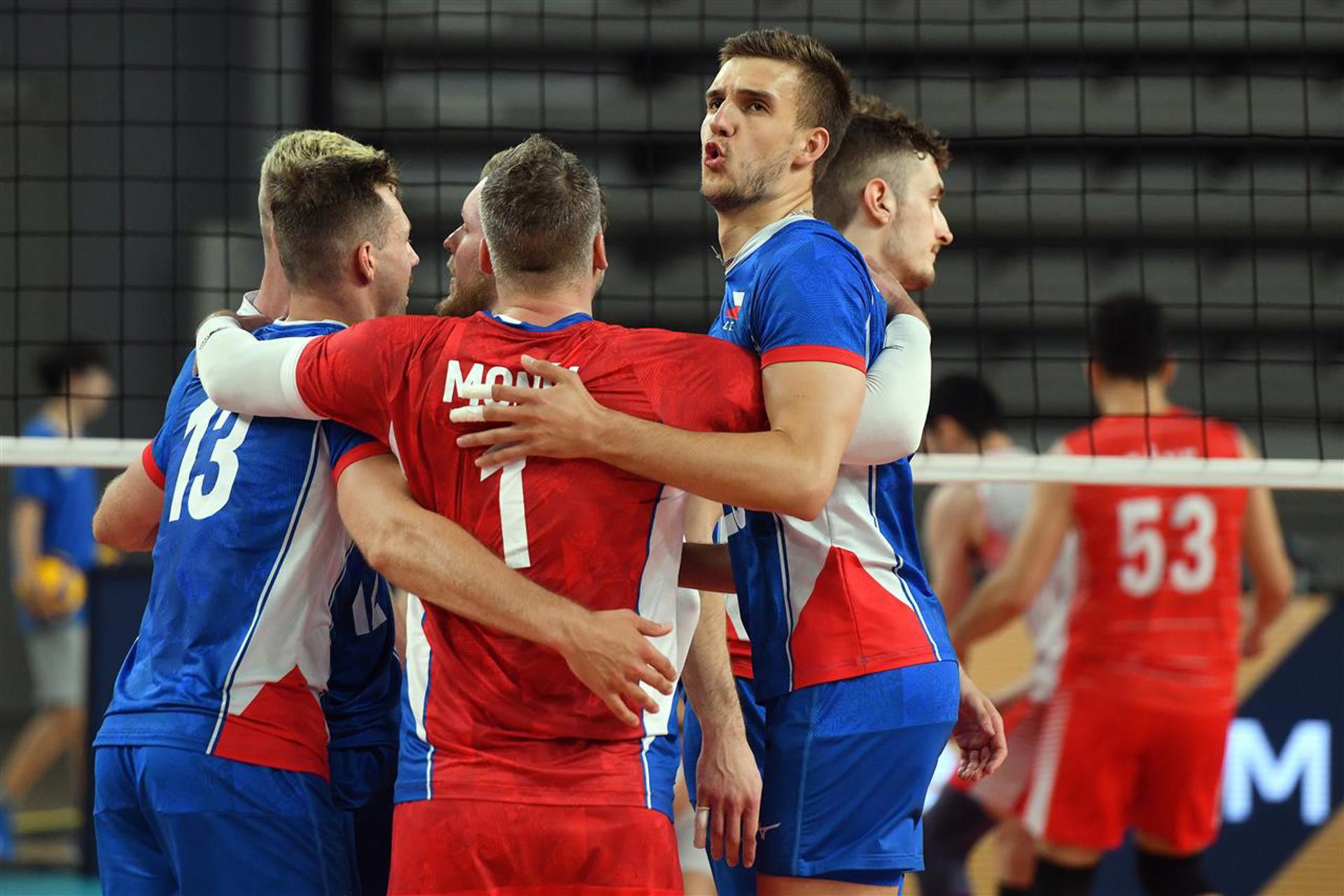 The two undefeated teams in this year’s edition of the competition - Türkiye and Czechia met in Gradska Sportska Dvorana Varazdin, Croatia, to determine the winner. In the end, it was the team of head coach Jiri Novak who stopped the domination of the Turkish players (who, before the final, had lost only two sets). After a fierce battle, the Czech players showed precision and nerves of steel in the important moments, finishing slightly better on attack - 61 to 55. Türkiye, on the other hand, were better on the blocking (eight to six), and aced one more time (six to five).
Jan Galabov became once again Czechia’s trump card (top scorer with 21 points), while for Türkiye, Adis Lagumdzija recorded 19, but it wasn’t enough for a better outcome.

Galabov also received the MVP award during the closing ceremony.

With Efe Bayram on fire right after the first referee whistle (three points in a row), Türkiye seemed to have started on the right foot in the match. However, on the other side of the net, the team of the Czech Republic also stepped up their game, led by Patrik Indra (6pts. in the set). The teams started a race for each point, but the players, coached by Jiri Novak, were able to seize their chances (20-16), and even a time-out for Türkiye didn’t work out, as with a final touch, Jan Galabov brought the 25th point to the Czech team.

It looked like that Türkiye were back on track in the second set, as they were leading throughout the most of it. However, Czechia’s players showed great mental strength, and even when they were four points behind (16-20), with Jiri Srb on the serve, and empowered Galabov and Marek Sotola, they came back, to even take the lead at 23-22 in their favour, and afterwards, get closer to the win. Precisely, Galabov was the star of his team in these minutes, with 14 points to his name by that time of the match. Statistically, the set was balanced, as only one more winning spike, one more ace and one less error sealed the deal for the Czech Republic.

Türkiye refused to give up, and with team efforts, were able to lead throughout the most of the next set (9-7, 15-13), оr when they would feel their rivals close, they would count on leader Adis Lagumdzija, who didn’t disappoint, especially after the 20th point. It was the better performance on the blocking (four to one) and stronger serve that helped Türkiye to get back on their feet.

Czechia didn’t lose concentration, and started leading comfortably in the fourth set (10-7, 13-10, 16-12). Türkiye pushed hard, breathing their opponents’ necks (16-17, 20-21), with Adis Lagumdzija taking responsibility for the important balls, stealing the spotlight. Despite his efforts, the Czech remained the more focused team, and with an ace by Martin Licek claimed the title.

“It's beautiful, I don't know what to say. They say that champions finish with an ace, and I'm glad we did it today and got the gold. It was the serve and the reception that helped us! I think we enjoyed it more than the Turks.”

“It's great! Before this match, we didn't have any super high hopes that we could do it. We did it on the field, the tactical stuff helped us, and we pulled it off. We went into it with a clear head because we had nothing to lose. The Turks were the clear favourites, maybe that's why we played better, and we could go head-to-head.”

Croatia and Ukraine battled it out hard for the bronze medals, delivering a Volleyball marathon in five sets (second tie-breaker in a row for 2017 winners&2021 silver medallists from Ukraine). The players of Ugis Krastins were close to come back, after losing the first two sets, and afterwards equalising at 2-2. However, in the deciding one, after a real “cat-and-mouse” game, the hosts of the Final Four tournament in Varaždin, Croatia grabbed the medals.

Petar Dirlic was one of the main Croatian weapons on Sunday, as he topped the charts with 29 points to his name (58% exc.). For Ukraine, Oleh Plotnytskyi added 25 (55% exc.).

Statistically, Ukraine outperformed their opponents on attacking (56 to 48 winning spikes), and aced nine times (to four). Croatia, on the other hand, were slightly better on blocking (13 to 11 kill blocks), and seized all their chances on their rivals’ errors - 35 to 26. 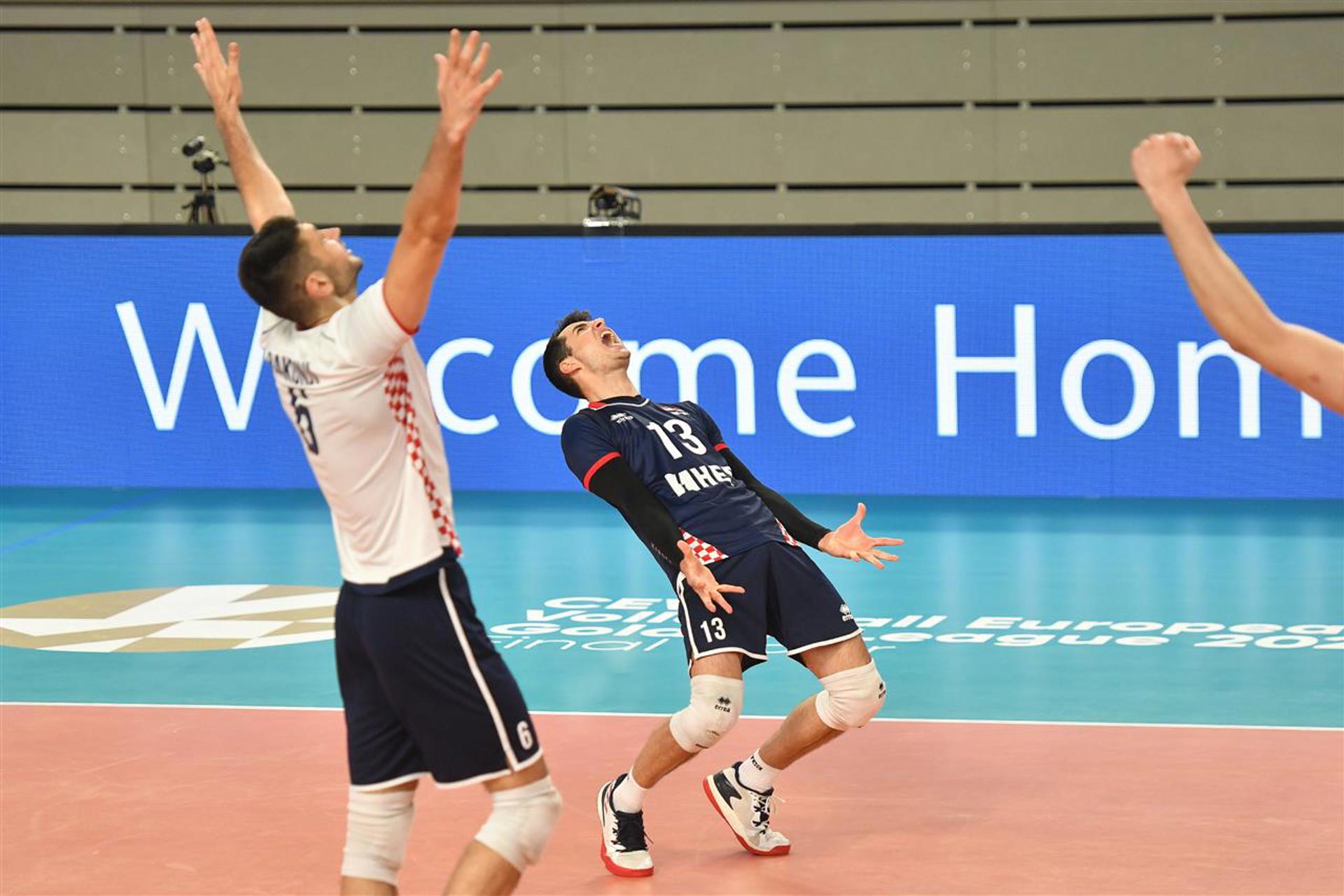 Croatia entered better in the match, taking an early lead at 5-1, and never looking back in the first set (18-12, 21-14). Peter Dirlic was shining on the court, scoring six points, while on the other side of the net, Ukraine’s captain, Oleh Plotnytskyi finished with five. More errors (nine) costed Ukraine the better outcome in this set, as they were slightly better on attack (11 to 10).

The beginning of the second set was a more intriguing one, as the teams were chasing each others in the result (6-6). Two successful attacks by Plotnytskyi even gave the leadership position to Ukraine (14-12 in their favour), but with some good performance on the block, the players of Enard would take again the lead. Dirlic again became ‘Man of the Hour’ in the last moments of the set, finishing the important balls and giving Croatia the 2-0 set lead.
As many as five blocks sealed the deal for the Croats in this set, as they let more errors as well - eight.

Ukraine were not ready to give up yet. They stormed to a 13-6 lead in their difference, and despite Croatia’s great efforts (17-16), with Maksym Drozd on the serve, and great contribution on the block by Plotnytskyi and Semeniuk, they got back on track.
The players of Ugis Krastins dominated on attack and at the serving line in this part - 12 to nine winning spikes; four to one ace. Both teams delivered four kill blocks each.

Flying, Ukraine continued pushing hard in the first minutes of the fourth set as well (7-2), and never looked back (19-10), disappointing Croatia. Plotnytskyi and his teammates dominated on all counts in this crucial fourth set - 11 successful attacks (to five); 45% efficiency on this element; two kill blocks (to one) and three aces (to zero).

The hosts showed nerves of steel in the tiebreak, as, led by Dirlic, could make a 3-point difference at 9-6. Even though, Ukraine weren’t ready to give in, but after a close call until the last minute, Enard’s players grabbed the bronze.

“For sure, we are really happy about the result, but this is one thing only. This young team takes at this first Golden #EuroLeagueM together, as we have in mind some retired players, new staff, etc. I am happy about the process, because we have things to fix, but we worked well, and today’s victory brings something positive for this team - it confirms that our direction is good. We will have to keep going, and right now, I am proud of the guys!”

“First of all, I would like to congratulate my teammates, because I think that this is a great success for Croatia’s Men’s national team. We played very well in the first two sets, but then again, as yesterday, we had some ups and downs, but fortunately, today, we won!”