One more exciting round for the #EuroVolleyM Qualifiers!

Story of the day

Teams were back in court for one more round of the Qualifiers, and they showed they are keen to be in the #EuroVolleyM Final Round in 2023. This Saturday, we could watch five exciting matches that had every sort of plot, including fast victories from visitors! In Tbilisi, Georgia received Hungary for the pool F. But playing at home didn`t mean an advantage for the Georgian team, as Hungary needed exact 60 minutes to win three sets in a row (12-25, 17-25, 13-25). The dominance was both in attack and defence: Hungary had the net domination with nine winning blocks compared to two of Georgia, and scored seven aces during the match! Marcell Pesti (HUN) was the top attacker (10 points) and the top scorer of the match (15 points) and now Hungary has the first victory in the qualifiers, while Georgia accumulates two defeats.

Latvia and Finland met in the Pool B. No easy time for the homeowners again: Latvia gave Finland 25 points for opponents' mistakes and allowed the Nordics to win the first two sets. The local team tried a reaction on the third set and fixed its attack: with 15 winning spikes, they lead the set from the beginning and gained a chance to go on in the match. But Finland recovered its pace on the fourth and last set, to close the match with 3-1 (17-25, 19-25, 25-20, 22-25). Now, both teams have one victory in the Qualifiers.

In Baku, Azerbaijan received Turkey for the match in the Pool A. The difference in attack volume between the two teams reflects the final score: Turkey scored incredibly 38 winning spikes and needed only 68 minutes to win three sets in a row (11-25, 20-25, 16-25). The first set was the most unequal of the night, with Azerbaijan scoring only 11 points. That was the second defeat for the Azerbaijan team and the first win for Turkey in the competition.

Cyprus met Norway in the second leg of the pool B and the final score does not tell all about the match! Although Cyprus scored three sets in a row, the difference in points in each set was really tight (25-19, 27-25, 25-21) as Norway fought for each point! The balance is reflected in the overall statistics: while Cyprus scored more Winning Spikes (45/34), Norway was safer on Blocks (10/4 points). By finishing this match, Cyprus got the first victory in the tournament. Norway still didn`t win.

The last match of the night was also the most balanced one: Bosnia Herzegovina and Albania needed the whole five-sets game in Sarajevo to decide who would leave with a victory. And one more time it was a night for the visitors: after losing the first two sets, Albania changed strategy and won two sets plus the tie-break (25-19, 25-11, 22-25, 21-25, 13-15) to guarantee the first victory in the Pool G. Bosnia Herzegovina counts two losses. 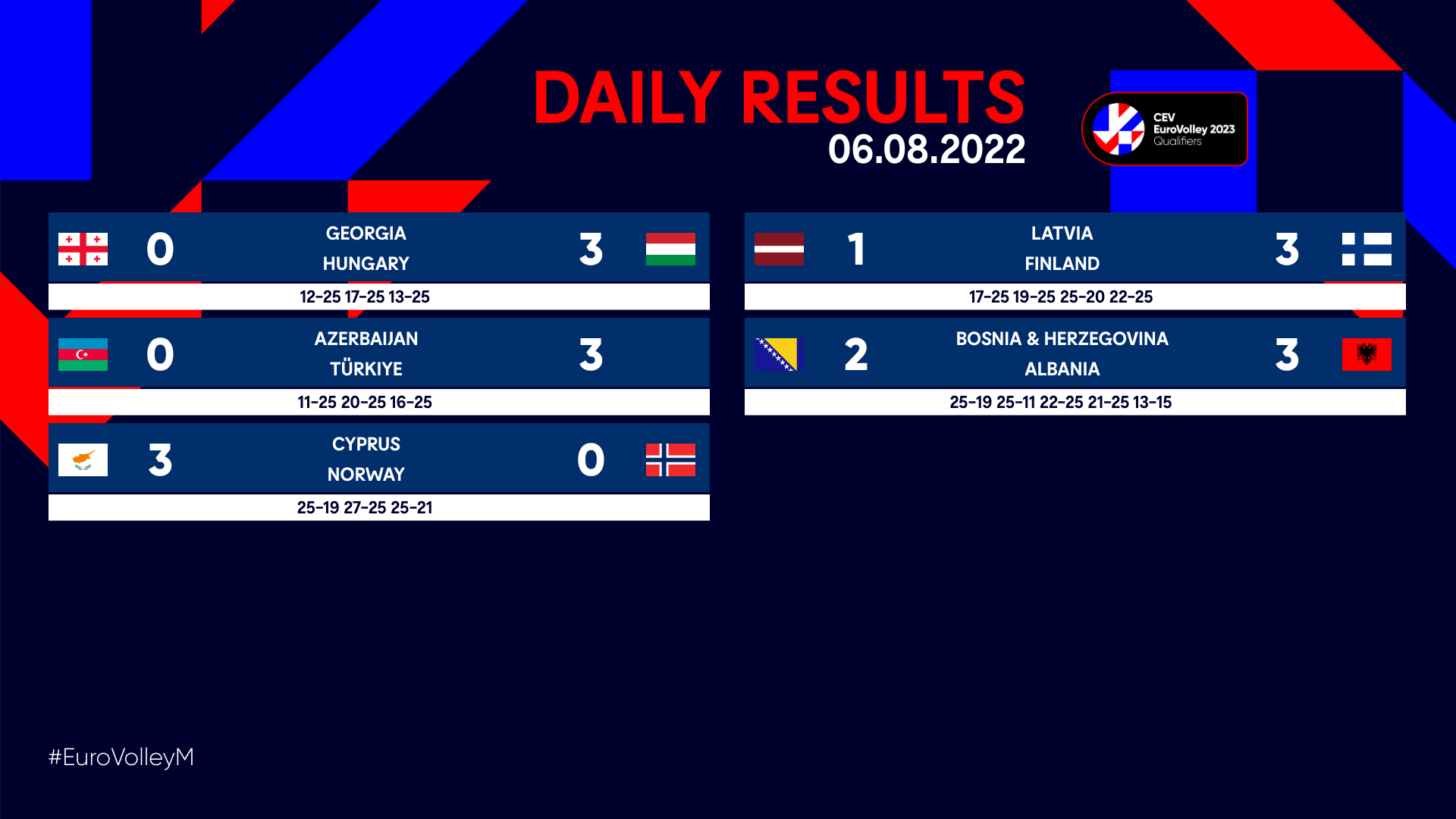 EuroVolleyM Qualifiers are being played across seven pools, and can be followed Live on EuroVolley.TV.