France closed Golden #EuroLeagueW Pool A with its fourth consecutive win, and advance to the Semi-Finals alongside with Croatia and Czech Republic

Two crucial matches were played today in the Golden #EuroLeagueW.

The Czechs lost to the Croatians in the last game of the regular group. However, they advanced to the Semi-Finals in Prostějov. After winning the opening set, the Czech players failed to build on the results from the previous Golden European League matches and lost to the Croatians in Zlín 1:3 sets. They will play their semi-final match on Thursday in Prostějov. The Croatian volleyball team secured the 2nd place in the group and will play for the Finals.

On the other hand, French National Team outplayed Spain throughout to claim a clear victory in straight set, with an impressive performance on serve, block and the 22 points from Lucille Gicquel.

The Croatians got the first successful ball after the attack and suddenly increased the score to 0:2 and 1:3. A video challenge decided 9:10 for the Croatians. The Croatian volleyball players did not let the home team take the lead and gained a 3-point lead, to which coach Athanasopoulos responded with a timeout. The next coach's challenge came at 12:15 from the home team's point of view, but this time the run was made and the score changed to 13:14, after the Croatian girls' smash into the net it was tied.

Trnková secured the lead for the Czechs with two successful blocks. Coach Akbas reacted with a substitution and his charges tied the game at 16:16.

With the score 19:17 for the home team, the Croatian coach took a timeout, and responded with a second one after increasing the score to 20:17. Trnková added the 21st point directly from her serve. Her serving streak ended at 22:17. The Czechs didn't take advantage of the first set point on Valková's serve and Orvošová ended the set. The second set started better for the home players, but the Croatian player leveled the score at 3:3.

Faltinova secured the Czechs' two-point lead with a smash down the line. Jehlářová increased the score to 8:5 after an attack through the middle of the net.

The Croatians, however, closed the gap and after Faltinová's unsuccessful rebound and Markovič's ace, they led by two points. Coach Athanasopoulos called his charges to the bench. Šamadan successfully finished at the net and added an ace, and Svoboda came on court at 10:12.

After the longest exchange of the match, Trnková tied the game at 13:13 with a block, and the Croatians then went back up by 2 points. Croatian passer Deak played the second over, then blocked Svobodová and the score was 14:17. Time out on the Czech side came at 17:19, Trnková with a block got the crowd out of their seats and reduced the score. Orvošová lobbed over Butigan to close the gap to a point, Grabovská replaced her and her serve gave the Czechs the lead 21:20.

Mlejnková tied the game at 22:22 with a block. Markovič won a set point for the Croatians and the Czech coach called time out. Markovič used a successful attack to tie the match at 1:1. 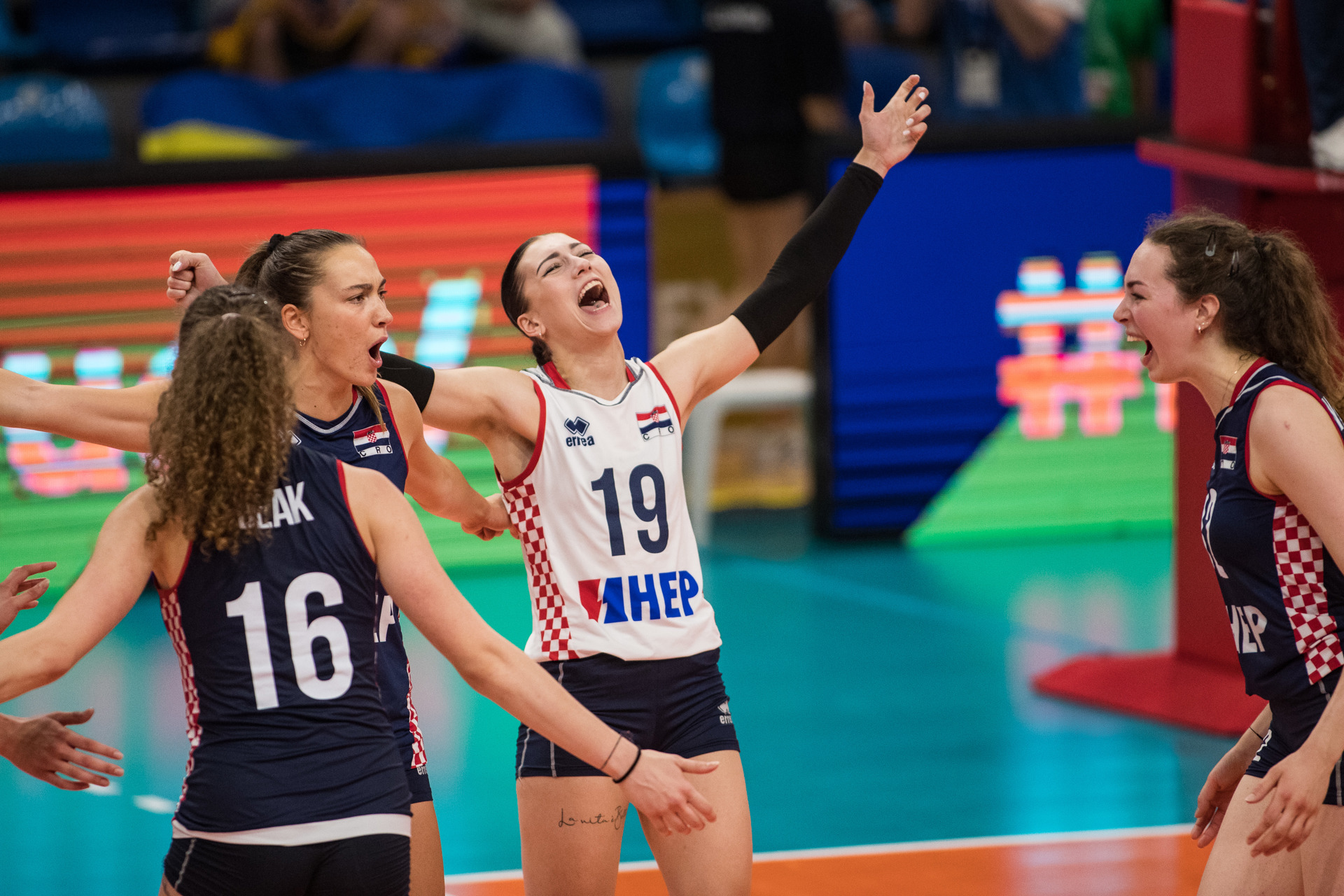 In the third set, Trnková tied it at 2:2 with another point block, and suddenly Orvošová hit a smash. Markovič managed to overcome the Czech block for the third time and tied the match at 4:4. Deak was successful in defence, Mlejnková in attack from the back position. Deak added an ace and the Croatians led by 3 points.

Pavlíková came on the court and her first contact with the ball meant a successful attack. At 8:8, Orvošová tied the score with a block, Jehlářová moved the lead to the home team's side in the same way.

The score rapidly equalized again 12:13. Markovič tied the score at 17:17 with a solid block, and Butigan attacked for another successful kill. Miloš increased the lead to 21:19. A double challenge scored another point for the visiting volleyball players and Grbavica increased the score to 23:19 with a block. The same player secured the set point of the third set, which ended 25:20 for the Croatians.

In the fourth and last set, Miloš and Butigan successfully defended three times in the opening set and the Croatians took the lead. Four touches on the Czech side meant an unfavourable score of 5:15 and Mlejnková was replaced by Pavlíková. Bukovská also came on the court, but the Croatians were already leading by 11 points. The home players made mistakes on the pass and on offense and the Croatians took their biggest lead of the game 21:6, then 22:7.

Šamadan secured a swing point for the Croatians with an ace, but the Czechs turned it away. Faltínová broke the block and reduced the score to 11:24. The last point of the match was scored by Miloš. 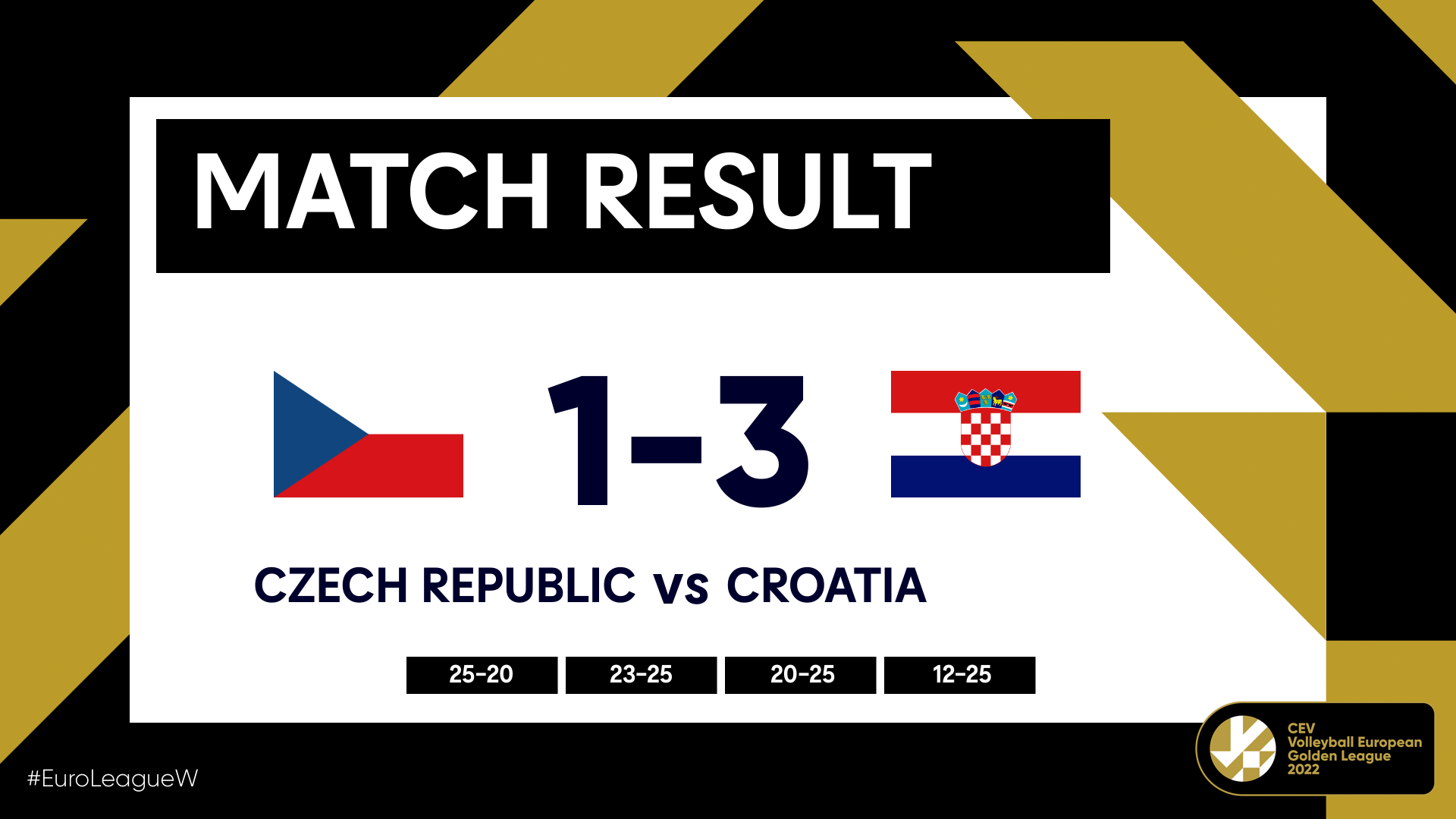 "The team was increasing the performance. We hade a good feelings after the hard work of the week and we showed it in the court"

"When we played against Czech Republic at home, they played really well and win against us in very good game. After that moment, we won three matches in a row. Now we are happy that we are qualified for the Semi-Finals and we will try do our best to win the next match"

"We didn't help ourselves with our serve from the beginning. It was difficult on offense because we were attacking full defense and I think the Croatians played very well. Advancing to the European Golden League Women's Semi-Finals is a great achievement, so we have to put this game behind us very quickly and prepare for our next opponents. I would like to invite the spectators to Prostějov because we will need their support very much"”

“Today we lost because of our reception. Croatia was very aggressive on the serve and we couldn’t pass. For them it was easy to read our offense. We were not aggressive enough, which was one of our strong elements in previous matches. Next week we will play in Prostějov and I really hope that all Czech fans will come and support us, because we want to go to the European Golden League Finals"

In the second #EuroLeagueW match of the day. The Spanish fans, most of them players of the U12 Spanish Championship being held in Valladolid at the same time, carried the Leonas on their wings, in search of equality. Emil Rousseaux stopped the Spanish reaction with a timeout, to seal the first set with a clear 17-25. The script of the end of the first set, with French solidity and Spanish errors, would be maintained in the beginning of the second, with France acquiring a quick 1-5 lead. Spain would calm their performance to tie at 13, to the joy of the home fans. Denia Bravo, Raquel Lazaro and Lucia Varela led the Spanish play to try to turn the set into a close affair. Lucille Gicquel's nine points broke the balance to seal the 18-25 victory.

Spain increased the intensity in their game, but it would not be enough against the leader of group A. France walked the path of efficiency, with a serve that pressured the Spanish reception and a block, impossible to overcome for the team coached by Pascual Saurin.

Lucille Gicquel was the top scorer of the match with 22 points. 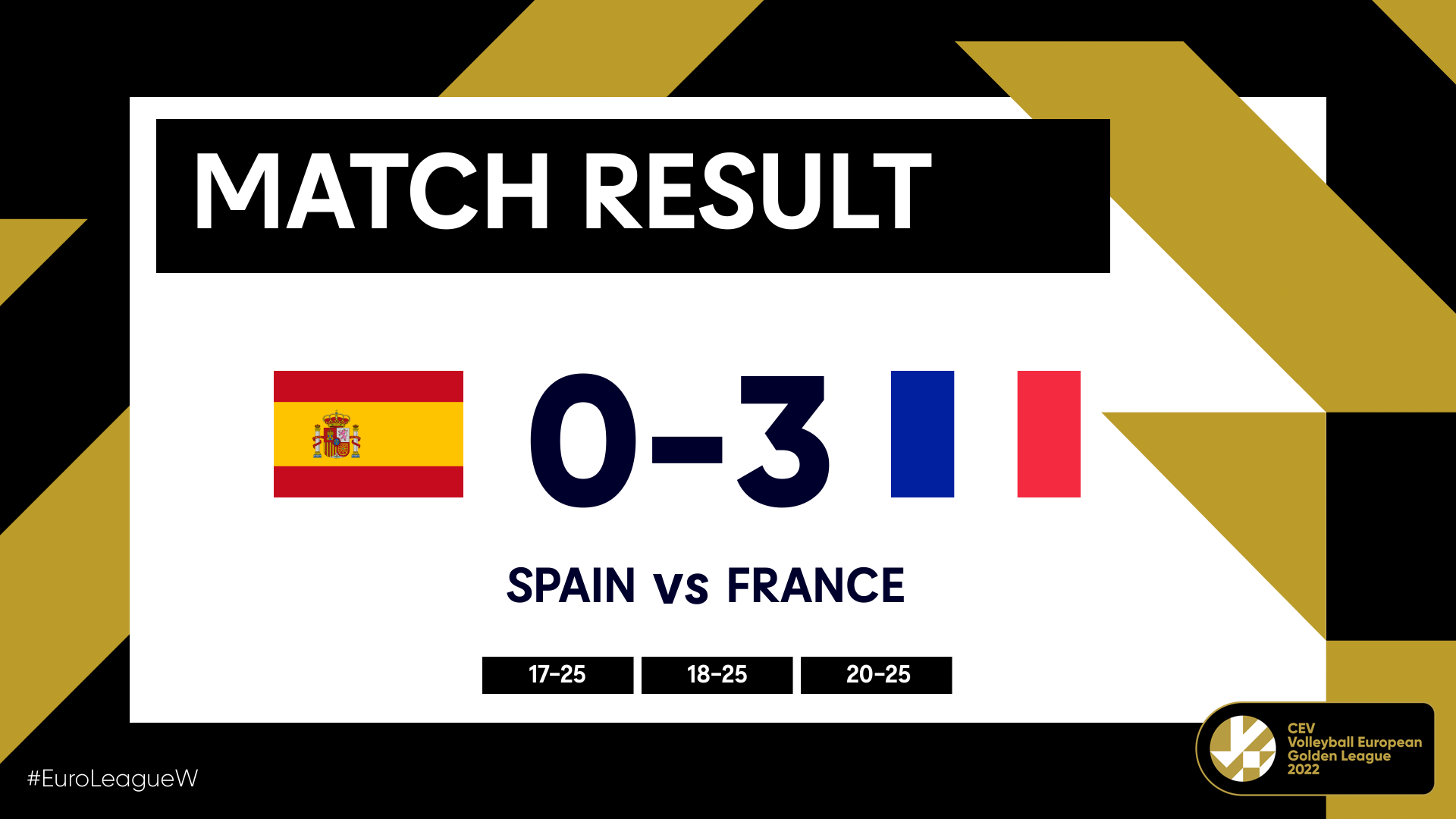 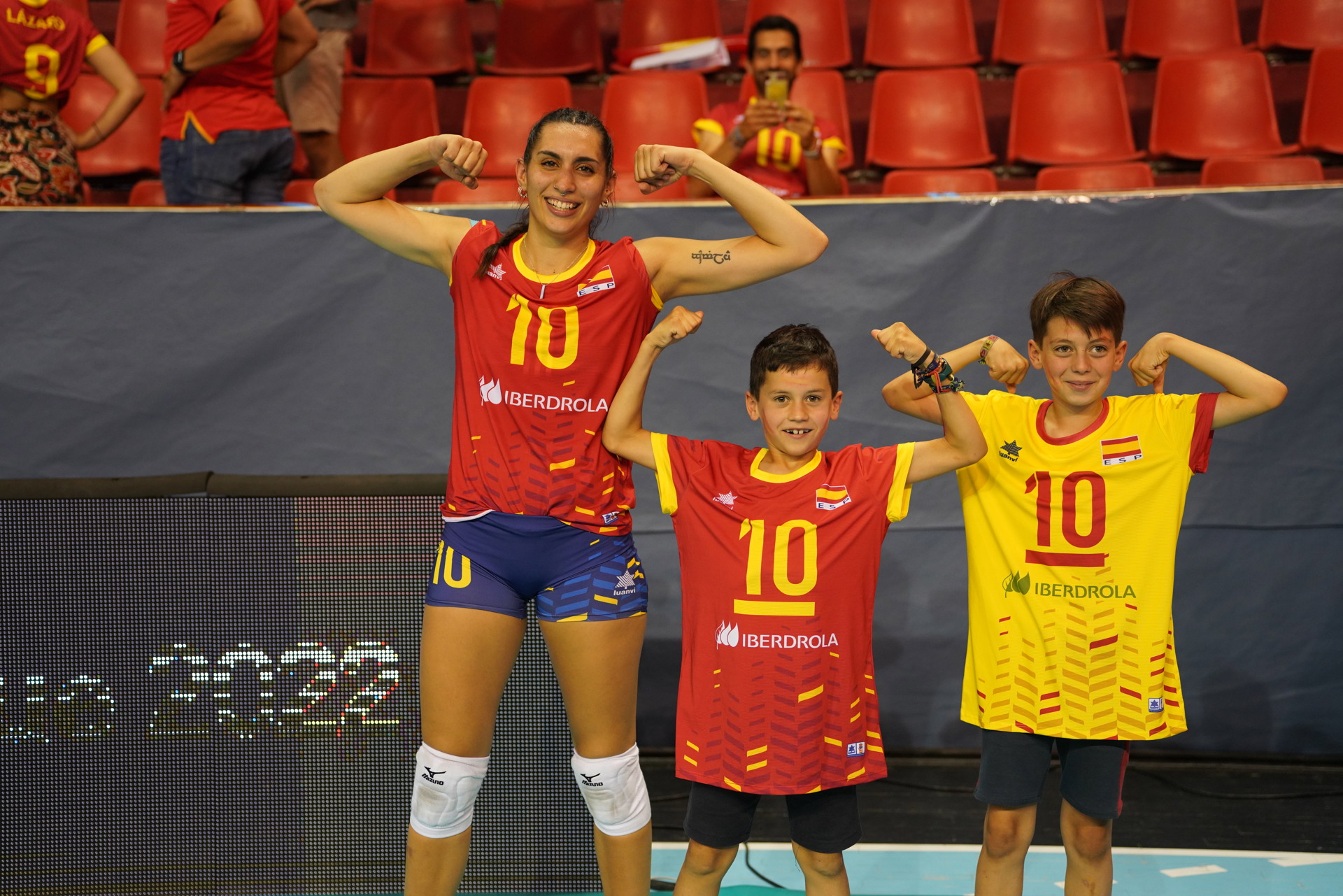 "I think that we did a very good job in service and block. We controlled the gam from start until the end. My team made what i expected they do, and i was satisfied with the result"

"It was a difficult game for us. We played the first game in the European Golden League against Spain, and we expected a better level from them. We really made a good work from the start and we are very happy for the victory"