Russia and Slovenia vie for #EuroVolleyU17M crown in Tirana

Russia and Slovenia will return to lock horns in the gold medal match of this year’s #EuroVolleyU17M in Tirana after previously delivering a dramatic five-setter in the pool stage of the competition. Italy and Poland will go for a repeat of their group match as well – this time with the bronze medal at stake. 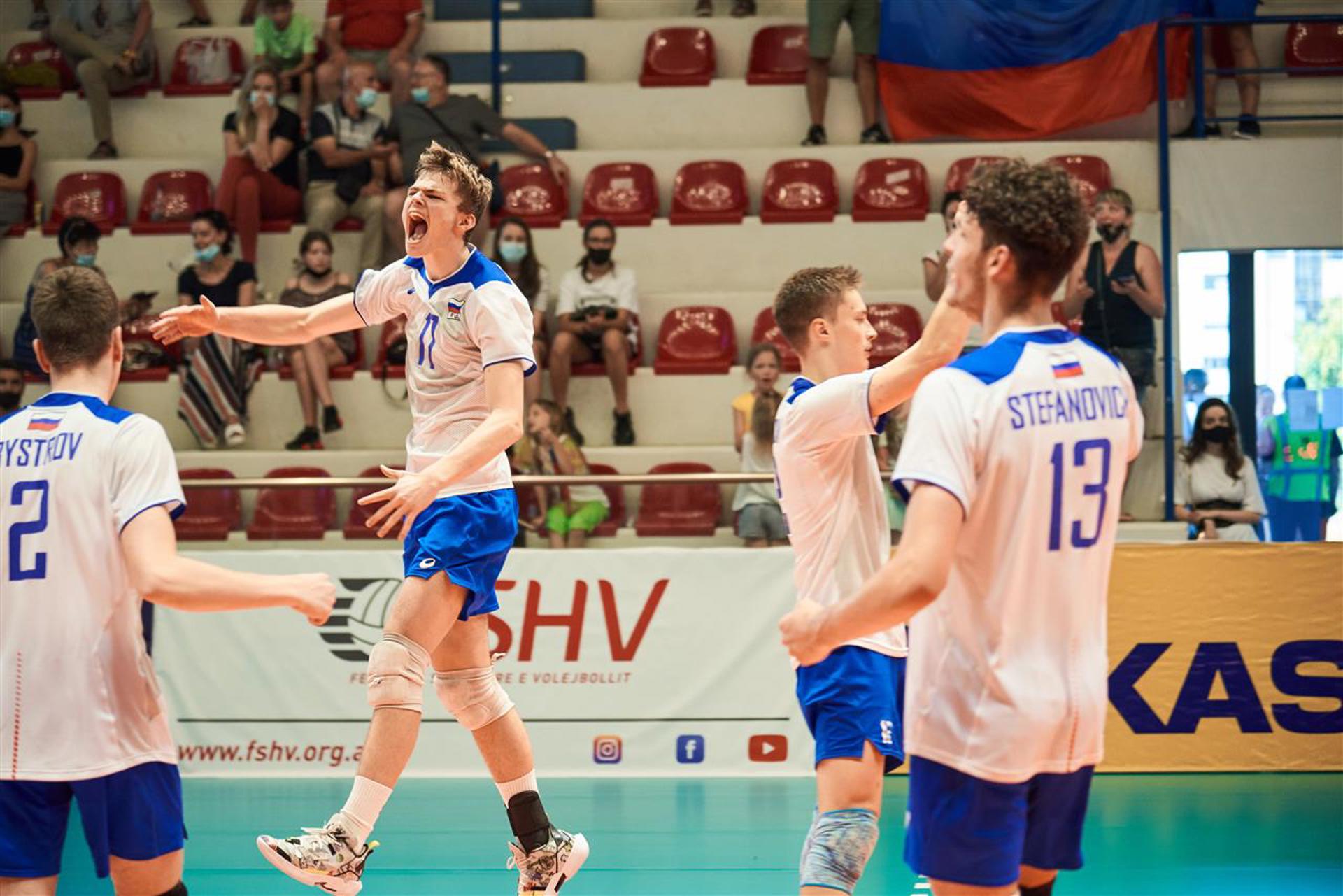 Russia and Slovenia were almost equally dominant in their respective semis on Saturday. Italy were able to put up more of a fight in the second set where they wasted a set point that could have changed the course of the game, but Russia eventually stormed to a 3-0 victory (25-19, 27-25, 25-17) to keep their immaculate record at the tournament in the Albanian capital city. Gleb Stefanovich was once again Russia’s ‘man of the match’ with a personal tally of 17 points, as Tomaso Barotto scored just as many for Italy in their losing effort. Russia performed especially well with their serve, recording as many as nine aces in the process vs. only three for the Azzurrini.

Though the Russians finished the job in three sets and in a little more than an hour’s time, their coach was yet unhappy with his team’s performance.

“No, it was not easier than we thought. We stuck to our game plan mostly, but there were moments of insecurity, there were lapses of concentration. We jeopardised our own chances in the end of the second set that could have changed the course of the game. But, overall, we delivered when it most mattered, although we have to admit, that at these age group competitions, maintaining focus and concentration is sometimes difficult.”

The Russian captain, Kirill Chekmizov added that the team worked hard on the rest day, but suffered in the first and especially in the second set. “In the third set, we played more relaxed, but more confident, whereas in the first two sets, though we tried to maintain concentration and focus, we had some nervous moments that could have cost us dear.”

As for the Italy coach, Monica Cresta, there was little doubt that Russia fully deserved the win.

“We were unlucky as our opposite hitter got injured in the warm up prior to the game. Taking into account what we have gone through the last few days, that was another blow, but this does not mean that Russia won because of that. No, Russia deserved the win, for the solid performance it delivered on the court. We had no illusions what a tough opponent we had on the other side of the net today.”

Captain Lorenzo Magliano echoed his coach’s words, valuing Russia as a dangerous opponent. “A physical, powerful team, they were better than us in the serve and maintained focus when we lost it,” added the 16-year old.

For coach Cresta, the competition has been a battle throughout but Italy will make do with a bronze medal match as a consolation. Meanwhile, her counterpart, Nozdrin vigorously denied the favourite’s tag for his team, insisting as well that he had no preferences as who the opponent would be in the Sunday’s final. In fact, it is an “old acquaintance”, as Russia will take on Slovenia, in the ultimate battle for the coveted trophy of the continental volleyball. Slovenia beat Poland in three sets as well on Saturday evening, in a match that was a lot more balanced, which lasted almost an hour and a half and where only two points in each of the sets separated the teams. 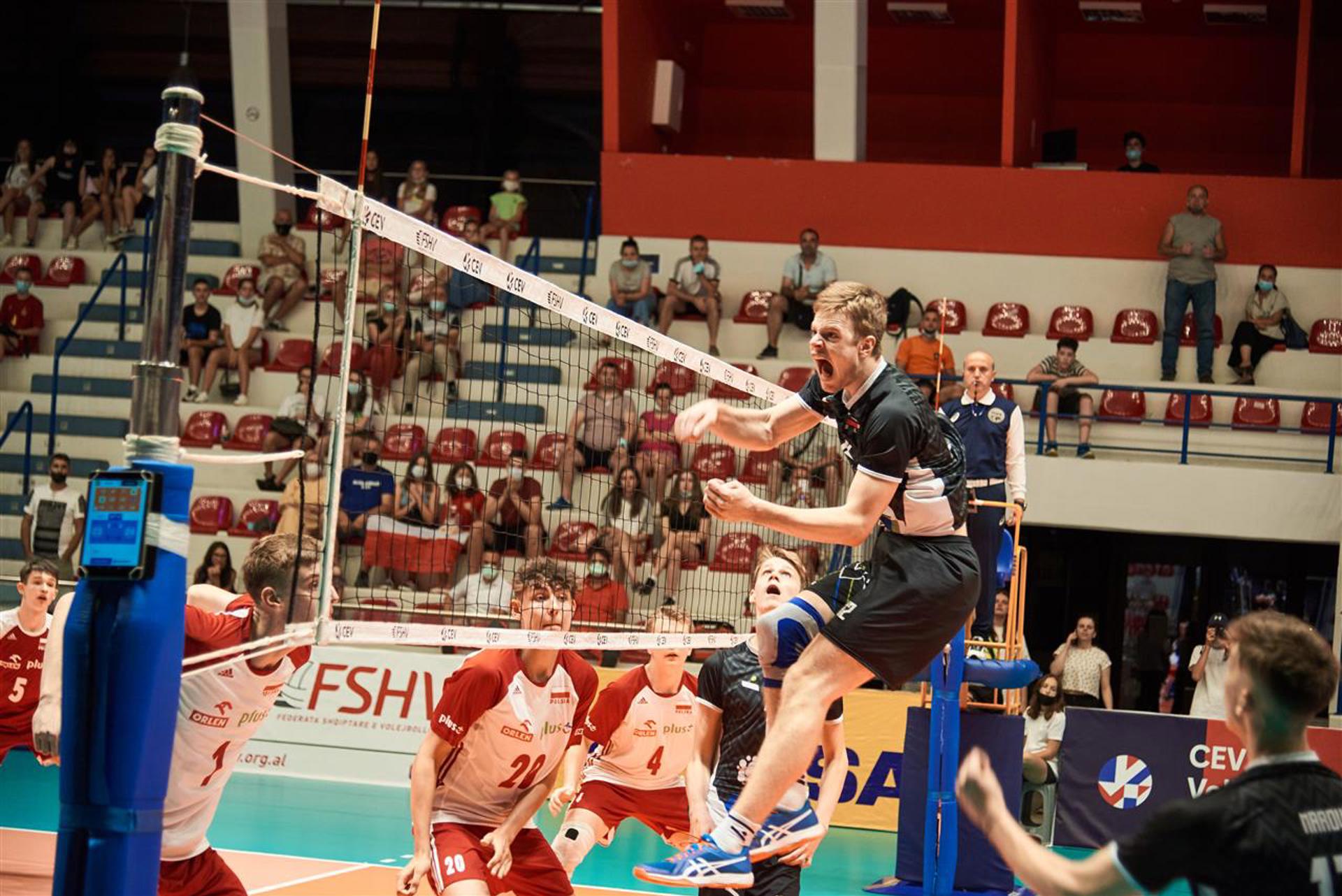 Slovenia lost to Russia in Pool I earlier this week and they will try to avenge that setback on Sunday when they will play for gold. The young Slovenians showed quality and nerves of steel to claim three close sets (25-23, 26-24, 25-23) in their semi-final with Pool II winners Poland. Jakob Podbregar Spes registered 17 points for the winners – just as many as those scored by Poland’s Artur Brzostowicz. In the bronze medal match, Italy will be hoping to repeat their 3-0 victory from the opening fixture of Pool II last Saturday.

For Slovenia’s coach Iztok Ksela, this was a well-deserved but difficult victory, even though his team won in three sets.

“Sure, it was not easier than I expected, as Poland was the top team in Pool II. We have to improve and avoid the mistakes we made with Poland today, we have to keep focus and not be so nervous at times, as the Russians are a tough team. We have to play even better than we did in the first match against them that for me was the best match we have played in this tournament.”

Meanwhile, for Polish coach, Konrad Cop, his team paid for the lack of concentration and had to chase the game throughout. “Now we have to play in the bronze medal match, but our team, as well Italy, are two teams different from our group stage encounter. However, we too want that bronze medal and we will fight for it.”

In the semis for places 5-8, Serbia came back twice from a one-set deficit to beat Belgium at the tiebreak and secure the right to play Bulgaria for fifth place after the young Lions beat Latvia 3-1.