Latvians and Swiss on to Tokyo beach semis

European beach volleyball will have two women’s teams competing in the semifinals of the Olympics for the first time in history after Latvians Tina Graudina and Anastasija Kravcenoka and Swiss Joana Heidrich and Anouk Verge-Depre have both won their quarterfinal matches in Tokyo on Tuesday.

The unprecedented scenario guarantees the continent at least one Olympic medal among the women for a second-straight edition of the Games following the victory of Germans Laura Ludwig and Kira Walkenhorst in Rio five years ago. It also leaves the door open for a potential historic all-European final at the Shiokaze Park Stadium on Friday.

The first women to represent Latvia at the Olympics in beach volleyball, the 23-year-old Graudina and the 24-year-old Kravcenoka made their already remarkable campaign in Tokyo even more meaningful when they defeated Canadians Heather Bansley and Brandie Wilkerson 2-1 (21-13, 18-21, 15-11) in the quarterfinals to advance to the medal rounds in the Japanese capital.

“It was very difficult. We needed to be very focused because our opponent made a lot of mistakes and we just needed to take advantage of those and make our game.” Graudina passes during the quarterfinal match against the Canadians (Photo: Volleyball World)

The 2019 CEV EuroBeachVolley winners will face Australians Taliqua Clancy and Mariafe Artacho del Solar, who upset reigning world champions Sarah Pavan and Melissa Humana-Paredes of Canada with a three- set (21-15, 19-21, 15-12) victory. The semifinals will be played on Thursday.

“Winning a medal would mean the world. Our country is small, and every medal is cherished like the best thing happening. We will try and represent our country the best we can.”

Reigning EuroBeachVolley champions Heidrich and Verge-Depre also needed all three sets (21-19, 18-21, 15-12) to take Brazilians Rebecca Cavalcanti and Ana Patricia Ramos down in the quarterfinals and secure their presence in the semifinals. Exhausted Heidrich and Verge-Depre lay on the sand after their match (Photo: Volleyball World)

The 29-year-old players have already produced the best result a of Swiss women’s team in the Olympics, improving from a fifth-place finish Heidrich and former partner Nadine Zumkehr secured five years ago in Rio.

“I can’t really find the right words right now, but the feeling is amazing! It was a big fight. It was really hot. It was not easy, but I think we did a great job as a team. We were fighting for every point, we never gave up, even when we didn’t play our best, and in the end we showed that we are here.”

The Swiss will face Americans April Ross and Alix Klineman in the semifinals. The team from the United States prevented an all-European semifinal with their 2-0 (21-19, 21-19) quarterfinal victory over Germans Laura Ludwig and Margareta Kozuch. 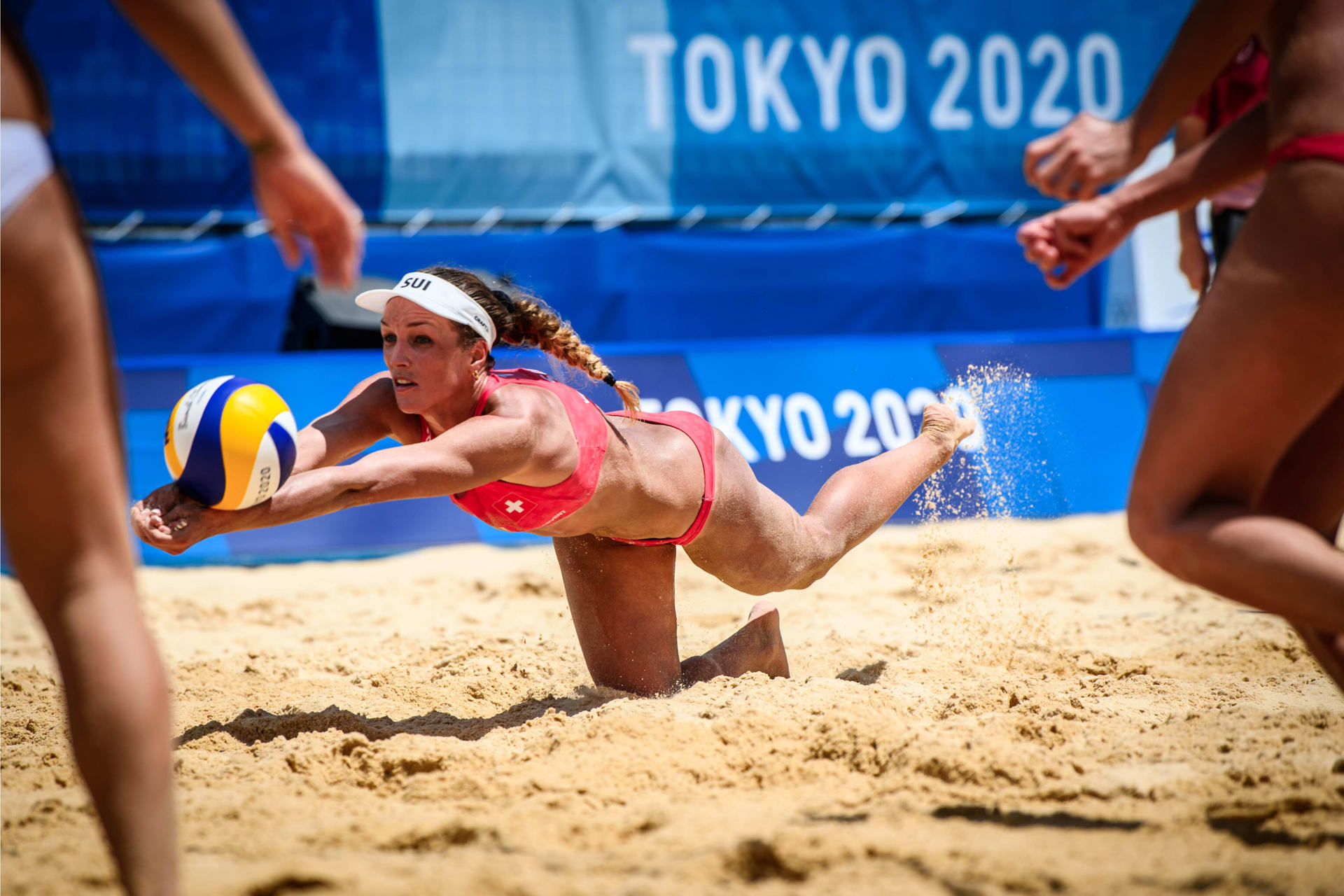 Ross and Verge-Depre will meet for the second time in the Olympics after the American and then-partner Kerri Walsh Jennings downed the Swiss and teammate Isabelle Forrer in three sets in Rio five years ago.

“In 2016, I already had a game against April. We lost it very closely in the third set, so we’ll give everything to change that result in our favor. We just look forward to playing for the medals, but first, we’ll enjoy this moment of qualifying for the semifinals and then, back to focus.”

The 35-year-old Ludwig, who became the first European woman to compete in four Olympic beach volleyball tournaments, and the 34-year-old Kozuch, who captained the German national team for several years, finished fifth after they setback against the Americans.

“It's a little bit disappointing, but when we sleep on it, we can be proud. There was a lot of ups and downs but we had a lot of nice rallies. The Americans are a really good team, they serve well and they have a good block-defense. All in all, I think we made it tough for them. They made also more mistakes than they normally do, so we definitely put them under pressure as well. I’m proud of how we played here as a team. It was a lot of fun playing.”