ROC proved too strong for Brazil, European teams on top of both pools in Tokyo

The preliminary round of the men's tournament at Tokyo 2020 has reached the halfway point on Wednesday at the stunning Ariake Arena delivering several surprises. After three days of competition only one team remains undefeated and it's ROC who beat Brazil in straight sets in the closing game of the day. Thus, the team led by unstoppable Dmitry Volkov strengthened their position on top of Pool B, having a perfect record of three wins and nine points. Earlier that day, France put themselves in a very difficult situation in the pool, as they didn't manage to stop vigorous Argentina and to keep their chances alive they will desperately need a win against Brazil or ROC. Poland improved their standings adding victory over Venezuela to their name, once Italy ended the Japanese winning streak, earning their second win.

Dmitry Volkov was on fire leading his team to victory over Brazil, ROC remain the only unbeaten team in Tokyo (Photo by Volleyball World)

France was the first European team to enter the court in Ariake Arena. Laurent Tillie's squad could expect that playing against Argentina wouldn't be an easy job, as the South Americans showed their teeth already in previous games against ROC and Brazil. Wednesday's encounter was a real rollercoaster, as from the beginning both teams were extremely motivated playing hard for every single ball. Although France won the opener, they were 2-1 behind, thanks to their playmaking virtuoso Benjamin Toniutti, who came in in the fourth set, they managed to extend the game to tie-break. But in the battle of nerves, it was Argentina to claim victory. The Frenchmen Trevor Clevenot and Jean Patry were the best scorers of the match, contributing with 24 and 22 points, respectively, but it was not enough to stop Argentina led by one of the best setters in the world Luciano De Cecco. On Friday, a tough challenge - the game against ROC.

Benjamin Toniutti (captain of France - by ffvb.org): "We miss stability in the game, we must try to extend the time when we play very well and reduce the times when we play worse to be more efficient and play smarter and change the rhythm a bit... We hoped to get at least two wins from the first three games, today we got one point and I hope it will be important. We have to prepare well for the next games, not give up and play hard, fighting for every single ball, like we did today at some point, to not regret anything. We knew that we have very difficult pool, but we still have two games to play and we have to focus on it. we will face two favourites, but we will analyse their games and we will see what we can get."

In the third match at Tokyo 2020, Poland faced Venezuela who compete at the Games for the first time since Beijing 2008. Although most expected it to be a quick straight-set win, it turned out to be an unexpected four-setter. Vital Heynen decided to start the game with a refreshed starting-six with Michał Kubiak, Kamil Semeniuk and Łukasz Kaczmarek. All went according to the plan until the third set, as Poland totally controlled the game, but then the two-time reigning champions were caught napping, Venezuela scrupulously used their chance and won their first at the tournament. The brightest point of the Polish team was Kamil Semeniuk, who made his debut in the national team this season and delivered great performance playing whole game at Ariake Arena for the first time, as earlier he went in only as a substitution. 25-year-old winner of the Champions League who scored impressive 24 points - in this tally was 18 kills and 6 aces, including the one that closed the game. Current leaders of Pool A will face Japan on Friday.

"I'm happy that the coach gave me a chance to play the whole match. Another win and three points, so now we are looking for the next game. Sometimes it happens that having everything under control in two sets, you lose this control in the third. Venezuela played good volleyball in the third, we couldn't kill some balls and they were successfully ending the counterattack, but we are happy that we returned on the court in the 4th set fully motivated and proved our strength closing the game."

Kamil Semeniuk
outside hitter of Poland 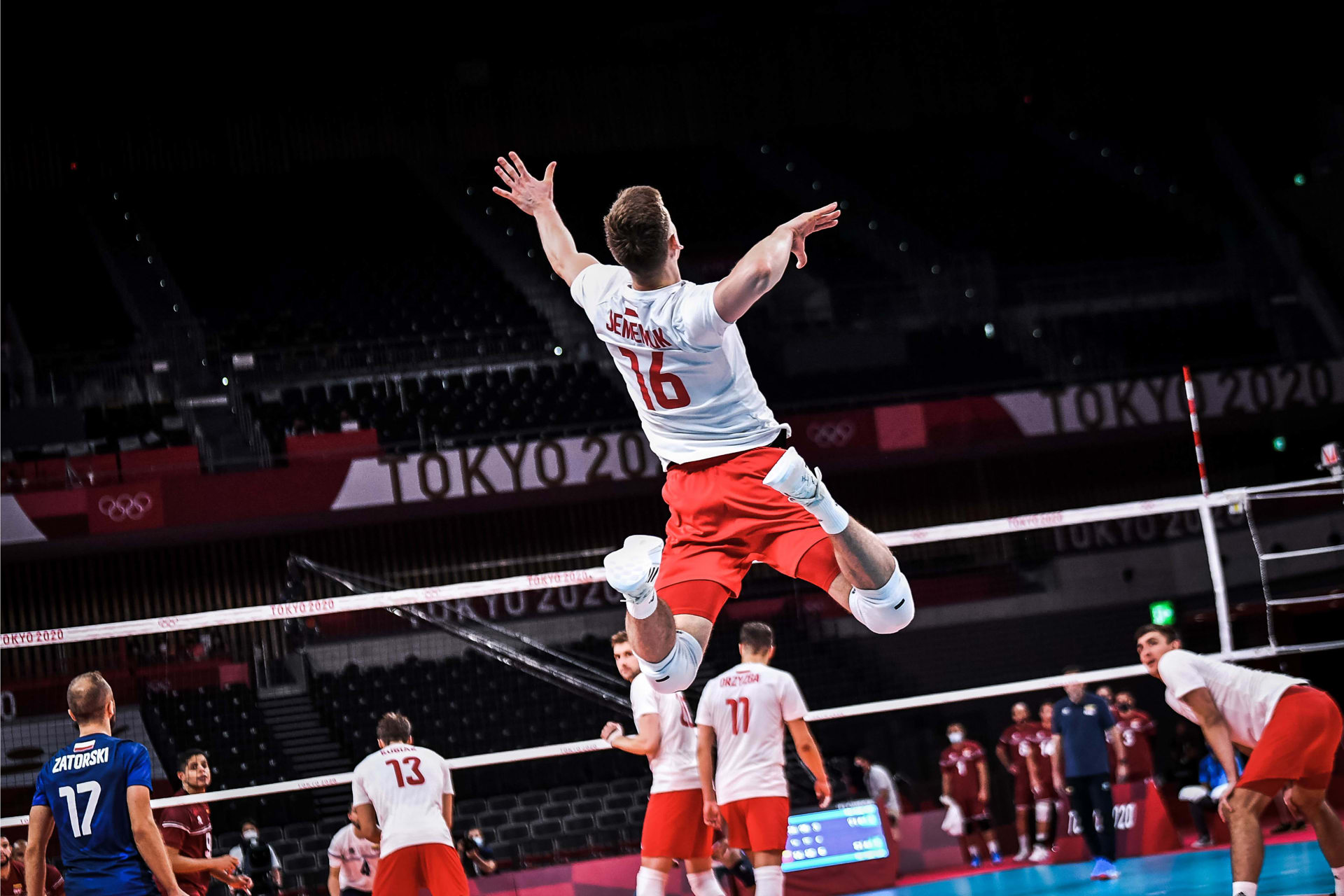 Italy delivered a big upset to host Japan, as they ended their winning streak earning an important victory in Pool A. After suffering a loss from Poland on Monday, it was crucial for Azzurri to quickly bounce back. With Simone Giannelli back on the court, Italy opened the game confident, quickly taking two first parts, but Japan were not willing to give up. The hosts were trying their best and they grabbed a hard-fought fourth set. But the Italian squad led by powerful guns - Osmany Juantorena (42.86% of efficiency in attack), Ivan Zaytsev (35.71%) and Alessandro Michieletto (56.52%) were too strong for Japan. Juantorena shared the top scorer honour with Yuki Ishikawa, as they both tallied 22 points. On Friday, Italy will take on Iran, who lost today to Canada.

"We wanted to play better than in the last game and we succeeded. We did well even if the third set didn't go our way. Today especially our service was important. We managed to keep the tempo, even if this tournament is very difficult. Now we are focused on Iran, because it's another very important match."

Osmany Juantorena
outside hitter of Italy 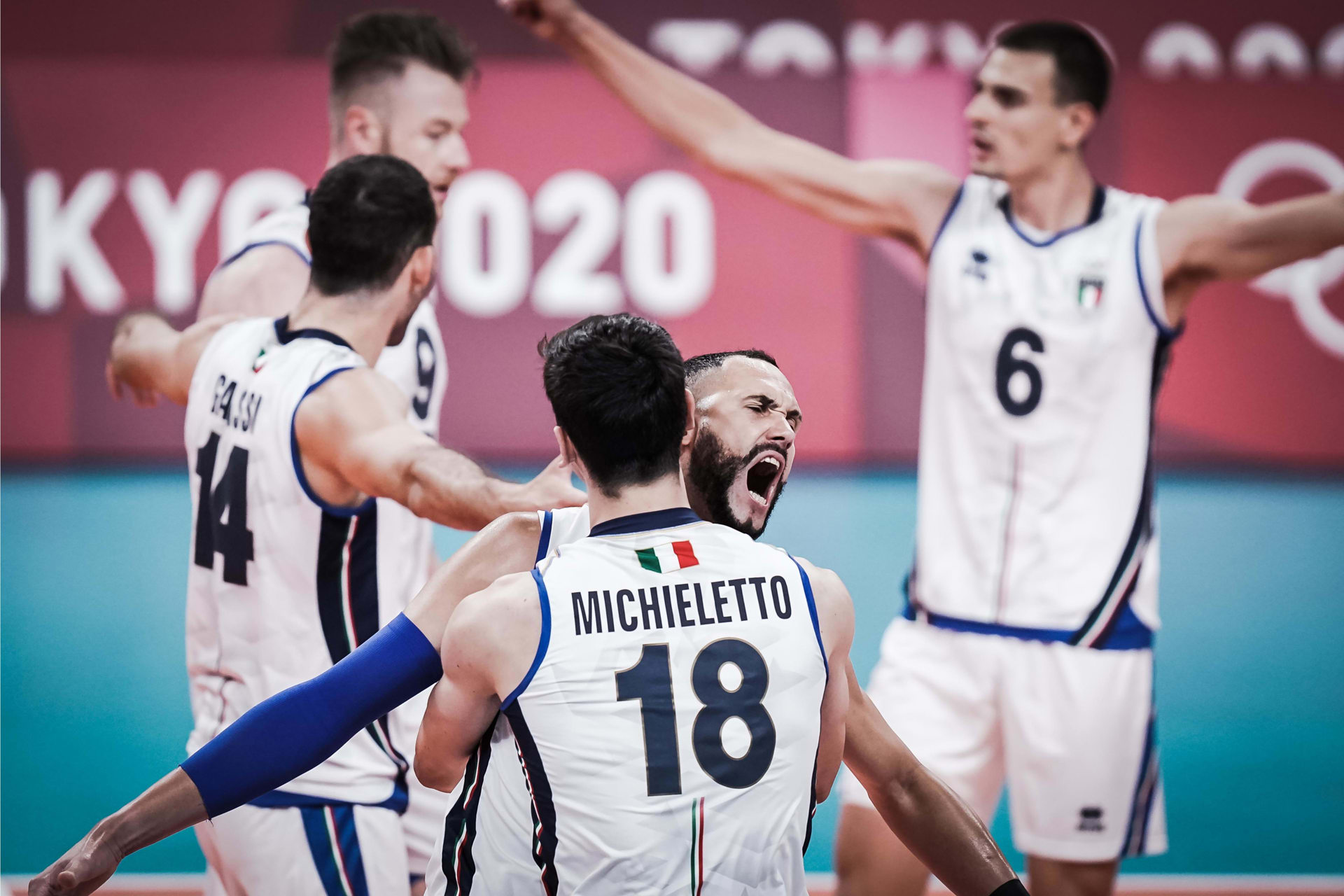 Osmany Juantorena was in a class of his own scoring 22 points and having 42,86% of efficiency in attack (Photo by Volleyball World)

And last, but not least! The game that could be safely called the match of the day, as Wednesday at Ariake Arena was concluded with the clash of the titans, rematch of Rio 2016 semifinal between two unbeaten teams in Pool B - Brazil and ROC. The London 2012 champions played almost flawless in all skills - in attack (44-28!) and block (12-6) they left Brazil far, far behind. Having a solid reception and strong serve, Tuomas Sammelvuo's squad was simply unstoppable, showing their best volleyball. Brazil's coach Renan Dal Zotto made all possible changes in his team, but they were powerless against ROC. A man of the match title could go definitely to Dmitry Volkov, who was on fire scoring match-high 18 points (13 kills, 4 blocks and 1 ace), their second best scorer Maxim Mikhaylov contributed with four makrs less. After three match-days ROC is a leader of Pool B with a perfect record of three victories and nine points! 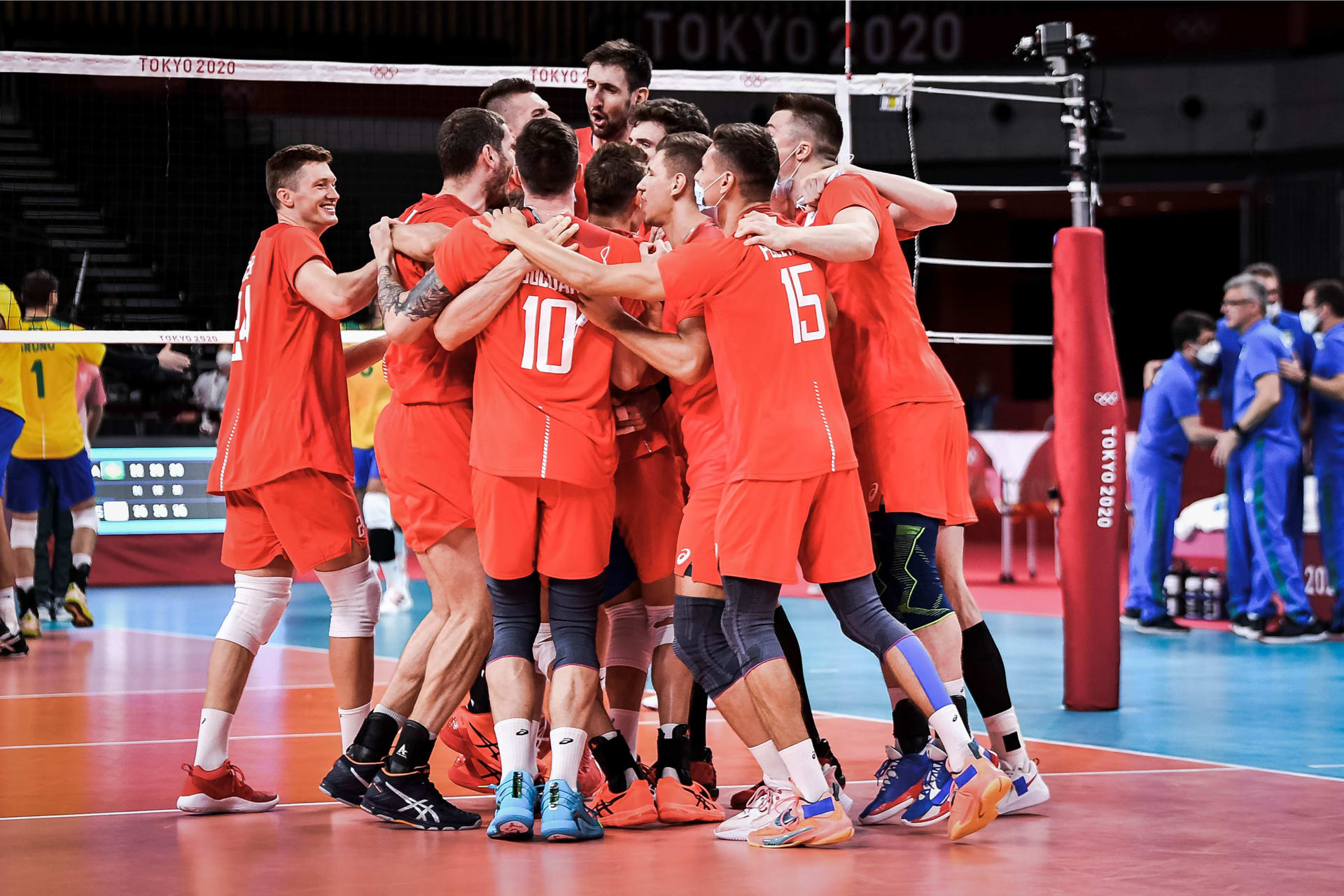 “We are satisfied with this win over the top men’s volleyball team because this will give us confidence in the next matches. The last time we defeated them in the Olympic Games was at London 2012, so this is a very important win for us.”