12 teams ready to battle it out at #EuroVolleyU17W

From July 16 to 24, the Czech towns of Prostejov and Hradec Kralove will welcome the Top 12 European Teams for the under age CEV U17 Volleyball European Championship- Women. Players, born on January 1, 2006 or thereafter, will contest in the Final Round of #EuroVolleyU17W, after qualifying successful in the 1st Round or 2nd Round Qualifiers.
This will be the third edition of the tournament in this age group, as after “restructuring” the age limits, the first #EuroVolleyU17W was held in Bulgaria in 2018, followed by the one in Montenegro in 2020. 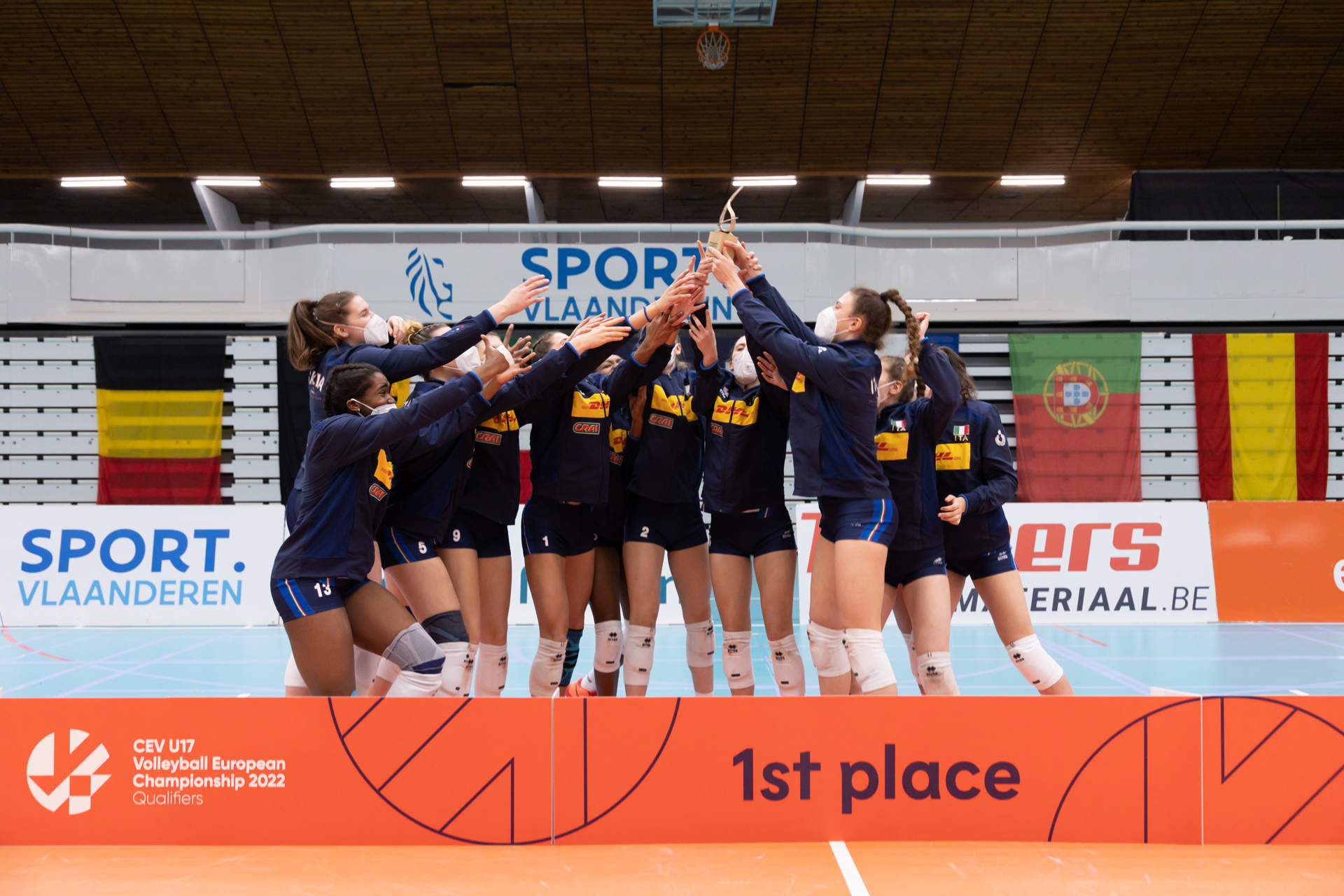 As many as three teams from the Top 4 from the competition in 2020 - Türkiye, Serbia and Italy (who then finished second, third and fourth, respectively) - will enter the courts, considered as favourites, but will have to face tough challenges in the face of the other inspired teams.

Much is at stake, as the sides will fight not only for the trophy, since the #EuroVolleyU17W serves as World Qualification as well. The best six teams will directly book their tickets to the 2023 FIVB Volleyball Women’s U19 World Championship.

In addition to that, the best eight (or seven*) countries will be invited to participate in the 2023 European Youth Olympic Festival in Maribor, Slovenia. The hosting nation - Slovenia, will have the right to nominate their boys or girls, even if not among the Top 8. The teams are divided into two pools. The two best placed from each pool will then proceed to the Semifinals 1-4, while the others will play Semifinals 5-8, and later, Classification matches 5-8. The winners from the semifinals 1-4 will fight for the trophy, while the losers will play for the Bronze.

The top two sides from each pool will play crossed semi-finals and the subsequent medal matches, while the teams ranked third and fourth will be continuing their journey in the classification matches for places 5 to 8. The Road to the Final Round

The Czech Republic are welcoming the top teams of Europe and will be aiming at showing their best, and making home crowds happy.
The best position that the Czech team has arrived so far during the years, is in 2015, when they finished seventh at the 2015 CEV U18 Volleyball European Championship - Women.
Head coach Petr Klár count on some of the most promising Czech players and the hosts can dream of a bigger success in 2022.

"These   teams   are   the   top   European   women's   volleyball squads. Serbia and Bulgaria are on a bit different level. We are not among the favourites,   but   we   are   playing   at   home,  and   I   hope   we   can   play   with everyone. Of course, we all have our medal dreams, but I am realistic. The main goal is to qualify from the group phase and finish on the 7th place, which would mean participation in the Youth Olympic Games."

In the 1st Round of Qualification, contested within each of the recognised Zonal Associations, the first placed team qualified directly to the Final Round.

Serbia from BVA, Slovenia from MEVZA, Finland from NEVZA and Italy from WEVZA  all did their job and booked a spot at the Final Round, while Poland finished first in Pool B of the Qualifier in EEVZA.

Maša Pucelj - Slovenia captain’s, shined in the tournament in Croatia, and was named MVP of the tournament, finishing with 69 points in 12 sets.

Anna Johtela of Finland was the top scorer for her team, competing in 11 sets and recording 43 points (3.91 per set).

In 14 sets, the Italian Merit Chinenyenwa Adigwe topped the charts for her side, hammering 66 points (4.71 per set).

Amelia Dombrowska of Poland was shining on the courts, as she took the floor in 13 sets, recording 51 points (3.92 per set).

In the 2nd round qualifiers, held in late April 2022, with single round robin tournament format, Türkiye, Bulgaria, Germany, the Netherlands and Croatia completed a clean sheet of their respective matches, and proceeded ahead to the title-deciding round. Hungary joined them as second best team across all pools.

Pool A in Türkiye

Türkiye did not allow any surprises and in the company of Hungary, Albania and Ukraine in Pool A, seized three straight-sets victories, thus topping the charts and grabbing the ticket to the Final Round.
Hungary also travel to the Czech Republic – as they finished as the best runners-up across all of the 2nd Round qualifiers.

Liza Safronova of was hammering point after point for team Türkiye in the Qualifier, becoming top scorer of her team with an average of 4.09 points to her name/per set. She might have some tricks up her sleeve, so opponents from Pool II might have difficulties when approaching her.
For Hungary, Cecília Noémi Jámbor was above all in the Qualification campaign, finishing with 3.67 points per set.

Pool B in Bulgaria

After losing the chance of qualifying in the 1st round, this time around, Bulgaria were impeccable, hosting the Qualifier on home soil. With three 3-0 wins out of three matches, the players of head coach Diyan Boyukliev secured the first place in the company of Slovakia, Spain and Norway.

Bulgaria’s Next Big Thing, Iva Dudova didn’t disappoint, as she is currently on the top of the Best Scorers Ranking, with a total of 149 points in as many as eight matches (5.96 points/average per set). Standing at 195 cm tall, she might cause serious problems to Bulgaria’s rivals.

Team Germany followed in the steps of the hosts of the qualifiers in Türkiye and Bulgaria, and finishing their 2nd Round journey with no losses (one victory at 3-0, and two at 3-1), the German players booked their ticket to the Czech Republic.

A rising star, the daughter of star opposite Georg Grozer - Leana (also an opposite), is one of the leaders in her team, as she is currently second in the Best Scorers Ranking, with a total of 144 points in eight matches (5.14 average per set).

Pool D in The Netherlands

The Dutch young players hosted the Qualifier in Pool D, where they faced the teams of Greece, Portugal and Georgia. The players of head coach William Klaver and did their job right. However, this is the first placed team among the top ones who lost the most sets (they have three victories - one at 3-0, one at 3-1 and one at 3-2).

Breathing down Dudovа’s and Grozer’s necks, Aysha Meering of the Netherlands is in Top 3 of the Best Scorers from the Qualifiers. She has recorded 142 points in eight games, which means an average of 5.07 per set.

The Croatian young ladies led the way in Pool E, where they outplayed Romania, Latvia and Estonia. They did so by seizing two straight-sets victories, and one at 3-1.

Lana Sesar played in eight matches and scored 127 times, meaning that she has an average of 4.7 per sets. Outside spiker Tonka Bosnjak also can be a problem for the opponents’ defence as she finsihed with 96 points in seven matches.

#EuroVolleyU17W will feature some of the future stars of women’s Volleyball and can be followed on the dedicated webpage (with live updates of statistics, play by play and photos on the match centres) and our social media channels.

Livestreaming on EuroVolley.TV will be available from the semifinals onwards.

Tickets can be purchased on Ticketportal.