Romania and Finland to play for the Silver #EuroLeagueM crown

CEV Volleyball European European Silver League 2022 - Final Four - Men at Tüskecsarnok Sporthall BUDAPEST started on Saturday evening with two thrilling battles that determined the composition of the medal matches due to be played on Sunday. The first semi-final between Finland and North Macedonia turned into a four-set encounter. Eventually, Finland prevailed thanks to the outstanding performance of the substitute player who became their hero of the day. A 23-year-old Aaro Nikula was an ace drawn out of coach Joel Banks' sleeve and may play a crucial role also in the grand final. The second semi-final brought an upset for the hosts Hungary, who suffered a straight set defeat from Romania. The 2019 winners will play on Sunday to regain their title and return to the Golden League next year. In the bronze medal match, Hungary - who finished 3rd last year - will take on the runners-up - North Macedonia. All matches are available live and on demand on EuroVolley.TV. 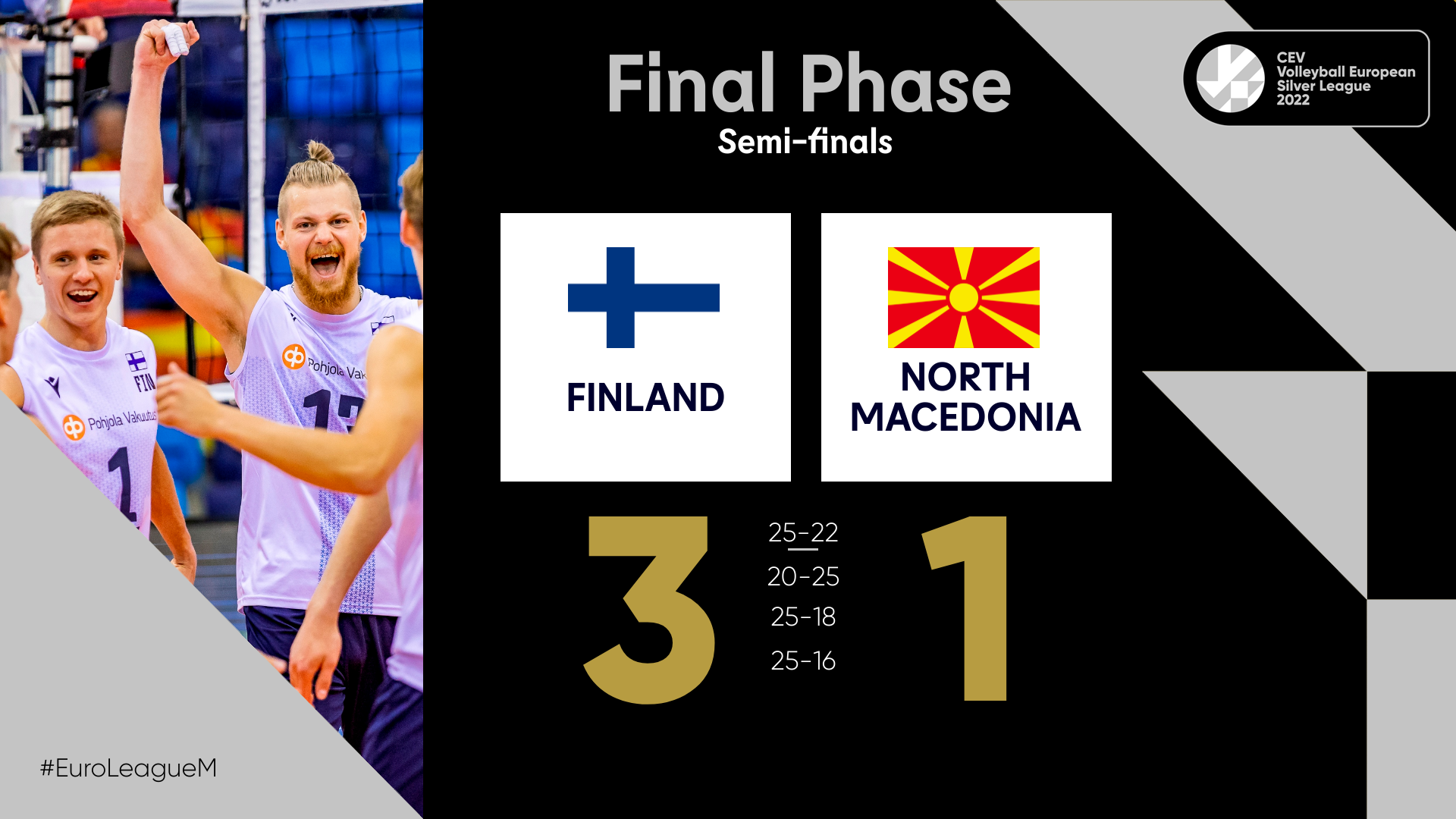 Runners-up of the 2021 Silver League, North Macedonia opened the match with more confidence, quickly taking a lead 8-5 and improving it to 13-9. Once they thought that the situation is under control, Finland woke up, making block their main asset (5 winning blocks). The team under the guidance of the coach Joel Banks not only caught up the score (14-14), but stepped up front, being led by Jiri Hanninen (8 points) and Joonas Jokala (7 points, including 3 block stuffs) who closed the set.

North Macedonia quickly shook it off, they learnt their lesson from the first set and after taking an early lead they didn't let Finland to come closer than two points. Although they struggled in reception (24%), this time block became North Macedonia's weapon (4 points in this skill). Captain Nikola Gjorgiev and Luka Kostikj were the most prominent players, delivering their team 6 and 5 points, respectively.

The third set delivered another unexpected twist. After a very competitive beginning, Finland jumped to a 16-10 lead. Even if Gjorgiev scored as many as nine points, his teammates were not able to step in, once Finland played flawlessly. Aaro Nikula, who came as a substitute in the previous set, in the 3rd part, became the best scorer of Finland (8 points), recording 100% of success in attack - 6 out of 6 - he also added one block and one ace to his name. Joel Banks' team didn't look back and took a 2-1 lead in the match.

Being only a step from a spot in the final, Finland was motivated to complete their mission in the fourth set. They reached the maximum advantage of seven points at 15-8 and although North Macedonia tried to shorten the distance, the Finnish team sealed the victory 25-16 after Nikula's spike.

23-year-old Nikula became the best scorer of Finland with 17 points to his name and 94% success in attack (15 kills). However, the top scorer of the match honour went to Nikola Gjorgiev, who tallied 23 points. The second semi-final encounter was no less exciting than a previous one. Although Romania were a pre-favourites, Hungary -sparked by home crowd - tried their best to challenge the visiting team. The match itself had a very competitive beginning, but then the visiting team, who was better in executing their attacks (56% to 45%), jumped to a three-point lead and kept the distance safe. Mircea Peta was a leader of the away side with 5 points. The same number of points were tallied by Hungary's Krisztian Padar, but his teammates were far less successful than their opponents.

In front of the home crowd, Hungary jumped to 12-10, but they didn't manage to keep it for long even if Camaron Keen led a much better balanced game. Romania made up the difference and imposed their own rhythm. With solid reception (53%), Romania improved their advantage and closed the set in their favour.

The visiting team kept the momentum, starting the third set with 4-0 lead and improving it further to 15-8. But the result on the scoreboard didn't discourage Hungary, who spared no efforts in their furious chase. However, the team around Robert Koch couldn't get closer than two points (18-20), once Romania used their first match point, stamping their ticket to the gold medal match with an ace from captain Cristian Bartha.

Mircea Peta topped the scorers chart with 14 points, including 10 attacks, 3 aces and 1 block. Peter Blazsovics was a top scorer of Hungary with 12 points to his name.

We knew that Romania is much better team than our team, of course physically and technically. Their players compete in really high level national championship in Romania and one or two players also abroad, so actually I hoped that in front of our home crowd we would play a bit better than usual, but unfortunatelly it didn't happen, but let's see what will happen tomorrow.

The bronze medal match between Hungary and North Macedonia is scheduled on Sunday at 16:00 (CEST), while Finland and Romania will lock horns in the gold medal match at 19:00 (CEST).